I've decided to drop cable TV for the summer.  I'm not going to replace it with anything until October (hockey season).  The over-the-air digital channels will do me just fine until then.  I have to return the DVR, but after that, I will be down to only the 15 or so channels I can get through an antenna.

When hockey season comes around, I'll get whatever service gives me the best option for the most Blackhawk games in HD (hopefully for the best price).

One thing that was sort of frustrating about my deal with Comcast is that phone service, internet service, and TV service are "bundled", so I never really knew how much I was paying for any individual piece.  But, a nice customer service lady helped me figure that out today.  She even helpfully suggested downgrade options that might work better for me than just dropping my service completely.  Such a nice lady.  In the end, though, we decided (mostly me  ... I think she still had her doubts that I really wanted to do this ... ) that completely dropping TV was the best option for me.

I'm not going to share with you the staggering amount of money I was spending on TV a month.  I'm a bit ashamed by it ... although if you have cable or satellite TV (especially if you are adding on HD), you are probably paying pretty much the same.  If I figure out how much I'm paying per hour of TV actually watched, the figure is even more embarrassing.  I wish I would have done this right after the Hawks won the cup.

Anyway, if you are visiting me this summer, and expecting to watch TV, your selection of channels is going to be greatly reduced.  Make sure you bring a book or a laptop or some other form of personal entertainment with you.
Posted by ESheppy at 6/30/2010 11:01:00 PM No comments:

#1 is Russian River Pliny the Elder.  I've never had it.

In fact, I am ashamed to say that out of the top 5, the only one I've had is Sierra Nevada Pale Ale.

As a home-brewer, I have a responsibility to at least taste a higher number of the top beers in America ... don't you think?  I do believe that I had better go out and get a few of these top beers and make myself drink them.

My kids got hold of the digital camera and shot a series of videos.

If you are a facebook reader, you'll have to go to blog.ericshepard.com to see the video. 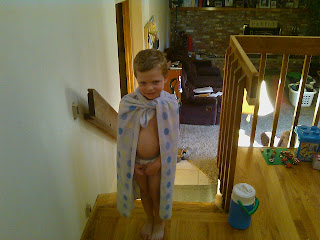 My Brush with Fame

Do you know who I sat next to on my flight home Friday?  Do you?  Do you?

I sat next to Erin Glass on the way home from TN.  Can you believe it?

So, for those of you who do not know, Gary Glass (at least the one married to Erin, the lady who sat next to me on the way home from TN) is the Director of the American Homebrewers Association (AHA).  You're pretty jealous, aren't you? Erin is actually a high-ranking member of the AHA as well.  The Contact Us Page on the AHA website lists her as the Brewers Association Membership Coordinator & Brewery Detective.  She told me one thing she does at the AHA is work with homebrewers who want to go that next step to actually starting up a commercial brew pub or microbrewery.   I'm sure she does many other fun beer-related things on a daily basis.  Sounds like a fun job to me.

The reason that Erin Glass, one and only wife of the one and only director of the AHA, was traveling back from TN was because she took her very small (and very cute) daughter to visit family while Gary was up in MN for the National Homebrewers Conference.  The very small child was not very happy most of the trip, and Erin spent most of the first hour apologizing to me about the loudness of her daughter's cries.  I kept telling her not to worry about it.  It was not that long ago that my children were that small, and I totally understand how hard it can be.  The poor mother ordered some wine, which was a mistake, as most of it ended up spilled.  I, of course, ordered a beer.  And, she mentioned that usually she would have ordered beer as well, but really was not wild about the choices on the flight.  It came out that I homebrew and then she mentioned who she was and we had something to talk about for a few minutes while both her daughter, and my 5-year-old finally slept.

She, of course, knows most of the big-shots in home brewing.  She told me what a nice guy Jamil Zainasheff, author of Brewing Classic Styles: 80 Winning Recipes Anyone Can Brew, is.  I, of course, have Jamil to thank quite a bit for my Quarter Life Crisis and my Buckwheat's Belgium Pale Ale. She told me that Charles Papazian, author of The Complete Joy of Homebrewing, is still pretty much a stove-top brewer (which sort of surprises me).  Apparently, Charles has a new daughter as well.  And, of course, she knows John Palmer (How to Brew: Everything You Need To Know To Brew Beer Right The First Time) as well.  I'm sure she knows other big shot authors in the homebrewing world, but those were the ones she mentioned.

Erin also told me I should join the AHA, and that I should attend the NHC in San Diego next year.

Making beer is a pretty easy process.  Yeast does all the hard work.  Yeast eat sugars (mostly from malted barley mashed to convert its starches to sugars).  The main waste product from eating all those sugars is alcohol.  Yes, yeast eat sugar and poop alcohol.

Another important byproduct of this process is carbon dioxide.  Most home-brewers rely on this carbon dioxide to carbonate their beers.  When I bottle my beer, I add some more sugar and let the yeast eat that up ... voila ... the little yeasties burp up just enough CO2  to dissolve into my beer and I've got carbonation.  Most commercial breweries and some home-brewers carbonate in other ways.  When you let the yeasties do it for you, it is called "natural carbonation".

Well, in my Whisky Wife Wheat beer, the sugars that I use to feed my little beasties come from honey.  Or at least, that is the plan.  When I was getting close to bottling time, I was in my local super walmart and grabbed a little bottle of honey.  I'm not that picky about the type of honey, so I just grabbed what was the least expensive per once.  Did not really look at it.

When I bottle my beer, I almost always do 2 or 3 liter PET (plastic) bottles and the rest in 12oz recycled glass beer bottles.  The nice thing about the PET bottles are that they firm up as the yeasties carbonate the beer, so you know that the process is progressing.

This time, though, my PET bottles were not firming up at all.  This has never happened to me.  I figured my yeast had gotten lazy, so I sort of shook all the bottles to maybe get the little guys working again.  But, after about 10 days, still nothing.  I assumed my yeast must have completely died for whatever reason.  So, my plan was to prepare a yeast slurry and re-open all the bottles, added a couple of drops per bottle.

For some reason, before I did this, I took a look at the bottle of honey.  Right there on the front were the words "Sugar Free Honey".  I turned the bottle over, and the nutritional information on the back confirmed:  Sugars ... 0 grams.

What!?!  Ok ... I probably should have at least looked at the honey before buying it, but sugar free honey?  I do not know how a beer keeper teaches his bees to make honey with no sugars in it.  I do not want to know.  I do not even really know why anyone would want honey with 0 sugars of any type in it.  I thought honey was a healthy processed-sugar substitute.  Is the really honey?  Do bees make this stuff?  Again, I do not really want to know.

It is lucky that I looked, because the fix I was going to attempt (more yeast) would not have helped at all.  More yeast with nothing to eat will not burp any more CO2 than my existing yeast could with nothing to eat.  I ended up opening up all the bottles and added table sugar to each one.  My existing yeasties attacked that sugar and when I left for the TRASH reunion, the PET bottles were firming up nicely. 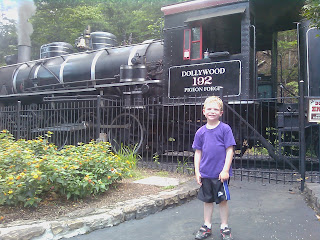 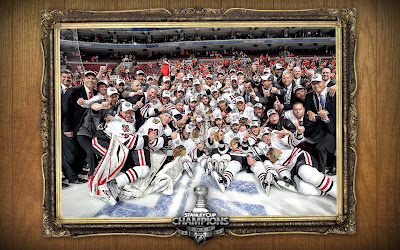 I listened to this a lot last night... never really paid attention to the words before.  Here they are:

Someone said you was asking after me
But I know you best as a blagger
I said tell me your name is it sweet?
She said my boy it's dagger oh yeah

Chelsea Chelsea I believe when your dancing
Slowly sucking your sleeve
The boys get lonely after you leave
It's one for the Dagger and another for the one you believe!

Chelsea I believe when your dancing
Slowly sucking your sleeve
The boys get lonely after you leave
It's one for the Dagger, another for the one you believe!
Posted by ESheppy at 6/10/2010 09:20:00 AM No comments:

Until young Mr. Kane scored that goal last night, I had been waiting 49 years to see the Blackhawks win the cup.

Well, I never followed the hawks until Jr. High when my family moved to the far north suburbs of Chicago, so I have only really been waiting 28 years.

Those first few years, you probably could not even say I was a suffering fan, so lets call it 25 years that I have been waiting for the Blackhawks to win.  25 years is a long time, but not nearly as long as the Maple Leaf fans have been waiting (43 years) or even the St. Louis Blues or the L.A. Kings who entered the league in 1967 and never won the cup (I guess that is also 43 years).  Wow, I feel sorry for the fans of those teams.  It feels good to not have to have the longest drought anymore and be able to feel sorry for the others.

And we are not even going to mention the Cubs.

Before this year, the closest the Blackhawks came during my 25 years as a suffering fan, was in 1992 when the Evil Pittsburgh Penguins just destroyed the Mighty Blackhawks in a sweep.  I just looked back at the scores, and they were much closer than I had thought, but I am pretty sure I am remembering correctly that although there were a couple of one goal games in that series, the Blackhawks were not really close to winning any of those games.  That was really painful.  And, a few years later, the Blackhawks virtually disappeared for over a decade.  They were just so bad that it was almost impossible to follow them here in Colorado.  But, somehow recently, the front office got smart about signing great young talent and putting the right pieces in place to give the team a chance.