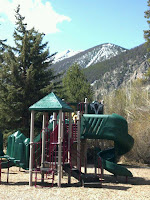 It is in fact impressive enough that it earned the Colorado Shepards a prize.

That little yellow ducky won a gift-certificate to Beaver Run, which is a resort in Breckenridge. The amount on the gift-certificate was enough to cover one night in a two-bedroom suite during a non-peak time of year (it would have covered about half a night during ski season).

My wonderful wife figured out that based on everything else we have going, this weekend was when we would have to use this.

So, we headed up to Breckenridge this weekend.

Jalapeños in the Popcorn

Well, I got my second article posted on the HomeBrew Academy's blog. Jalapeños in the Popcorn is up there right now. Check it out and leave a comment. It is about adding jalapeños and tasting SheppyBrew's Gringo Cerveza Jalapeño Ale.

It is, of course, my follow up to the wildly popular article Popcorn Jalapeño Cream Ale . I can tell it was wildly popular because of the large number of facebook shares and tweets shown there on the post.

The new article has not generated nearly as much "buzz". Not sure why. I suppose everyone got everything they wanted out of the first article. The concept of popcorn in the mash with jalapeño flavoring is apparently old, worn out news.

Doesn't matter. I enjoy the beer.

Tommy Hawk is actually more in the American IPA range, but it started out as an APA, and I just decided to keep the name as a bit of a reminder as to where this beer came from. Tommy Hawk is one of the beers that started out as a Mr. Beer recipe, got upgraded to a partial mash, and then upgraded again to all-grain. This is my 5th time brewing Tommy Hawk, although it is obviously much different now than batch 1 was.

It is essentially the same recipe as batch 4, except that I am using the hops a little differently. This time, rather than a traditional bittering addition at 60 minutes, I decided to try first wort hopping (FWH). Basically that just means that as I drain the wort from my mash tun, the hops are added and steep through the steeping process. Theoretically, this give a more smooth, less harsh bitterness with more flavor than a traditional bittering addition.

Connor's Ride to the Cowboy Playground

Since I reported that the youngest Sheppy clone had finally decided to learn how to ride his bike (see Connor the Biker), he has ridden a bunch. I love to come home from work and have my little boy ask me to go riding with him, and he does it a bunch.

So far, we have just been on the bike trails around our neighborhood. These are great for a quick ride between the time I get home and the time dinner is ready, but they don't make for the most exciting ride in the world. Last weekend, we took a "trip" to a local playground, but that really was not enough to be consider "out of the neighborhood".

Saturday, we decided to ride our bikes to "The Cowboy Playground". I actually have a post on this blog about another time we rode there (see Cowboy Playground). It is still true that I don't really know how to drive to this park. I've only ever been there by biking. 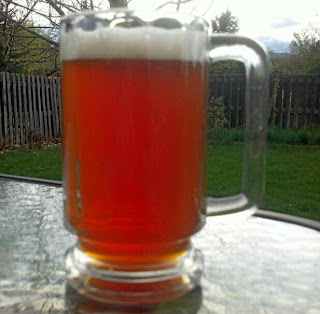 Believe it or not, I have had people say they like to read these brewing stats posts. 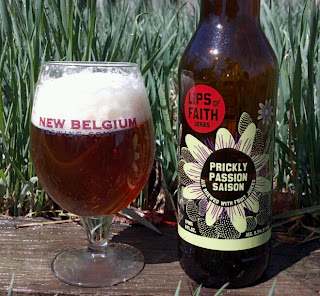 At some point in the not-too-distant past I procured a 22 oz bottle of New Belgium's Prickly Passion Saison. It has been sitting in one of my beer fridges for quite awhile and I sort of forgot about it. A few days ago, while looking through my beer inventory I discovered the bomber and thought, "wow, I should drink that with Easter dinner." And so, when it was almost time for Easter dinner, I popped it open and poured it into my New Belgium globe glass.

It is, of course one of the New Belgium "Lips of Faith" series of beers. It does not disappoint.

It pours golden amber in color with a beautiful, thick just-barely-off-white head. It is nicely carbonated, almost sparkling in its effervescence.

About the time that I kegged up my Pompously Illegitimate Red Ale (PIRA for short), I picked up a bomber of Stone's Arrogant Bastard (AB for short) knowing that eventually I would like to compare the two beers. Of course if you are new to this blog (or were just not paying attention), you may not know that PIRA is the SheppyBrew Brewery's tribute brew to AB and the Brewing Network's "Can You Brew It" (CYBI) attempt to clone the beer. You can read a bunch about this on this blog by reading through the labels "Arrogant Bastard" and "Pompously Illegitimate".

Today, I popped open the bomber of AB and poured myself a glass of PIRA.

Going through my Google Reader this morning reminded me that tomorrow is Session Beer Day. Coincidentally, it is also National Beer Day.

If you check-in a beer under 4.5% ABV on untappd tomorrow, you will earn yourself not only a beautiful Session Beer Day 2012 badge, but also a National Beer Day badge. Two for the price of one.

One thing that frustrated me as a father has been that my youngest boy had no real interest in learning to ride his bike.

I actually taught him to ride almost two years ago when he was 5. If I held the back of his bike and gave him a little push, he could ride on his own for as long as he wanted. I had to run behind and help him stop, though. Actually, the whole balancing part took way less than a day and I figured he would be riding very quickly.

Then, for some inexplicable reason, he decided he was done with his bike. For almost two years every couple weeks I would ask him if he would like to finish learning. His answer was always no. I kept trying to explain that it would take very little work for him to learn to start and stop.

I think he was afraid he would fail. He did not trust me when I told him that he was SOOOOOO close and that he would be able to do it very quickly.

FINALLY this past weekend, I decided that I was done asking him and forced him to try (by bribing him with the promise of playing WII and watching TV).

I've been sharing the badges that I've earned on Untappd (see First Month of Untappd and Running for Mayor @BallyFitness , and Some more Badges @Untappd , and Still More @Untappd Badges). Here are some more:

March broke the page view record for my little blog again. I am not sure it would have happened without the boost from my article on The HomeBrew Academy's blog.

Here is the list of the most viewed posts over the past 30 days: