We went backpacking this weekend.

If you are in the Denver metro area, you probably know that there has been really severe weather up and down the front range. We didn't go far enough to escape the weather, but we managed to have fun anyway. 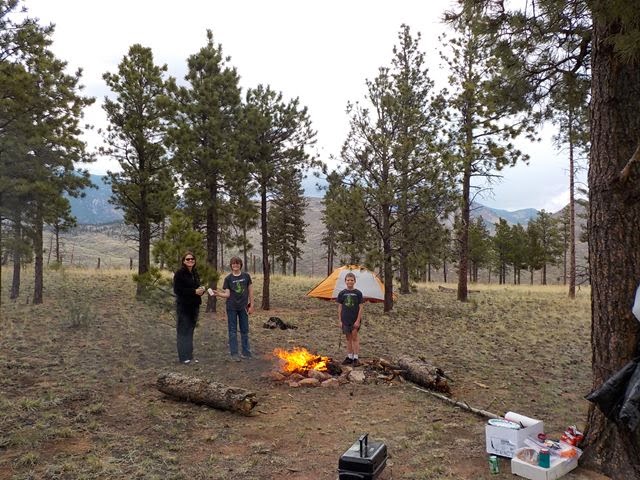 We went to the same place we've always been backpacking as a family. Yes, you might think it would get old to keep going to the same place over and over, but the kids really like this area and the fact that we know it so well is useful when it comes to planning and adjusting to things like weather.

The first night, we drove to a campsite alone a forest service road on the way to the trail head. We pitched our tent and gathered firewood, started our fire, and had some brats for dinner.


After the kids were in bed and I was waiting for the fire to die down, suddenly, the sky opened up with pea-sized hail. I got into the tent a little wet, but not bad. The rain and hail stopped sometime during the night. The next morning we were able to get the tent pretty much dried off with a towel and the Colorado sun and wind. 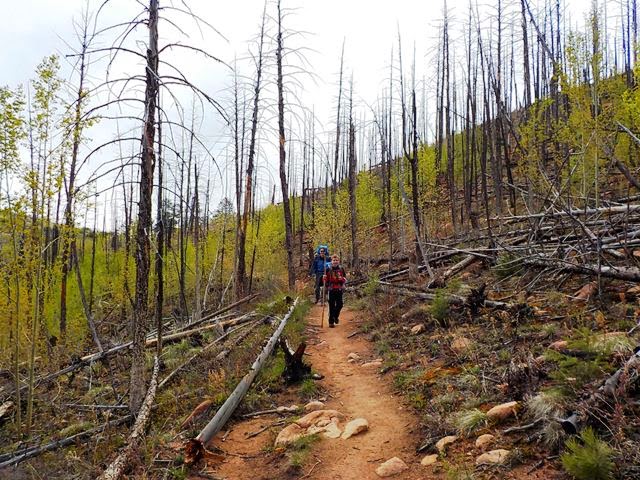 Then, we made it to the Goose Creek Trail Head. You may remember from previous years that the trail starts on the edge of the Haymen Fire burn are, but quickly makes its way into a nicely wooded area. The trail makes its way along Goose Creek. 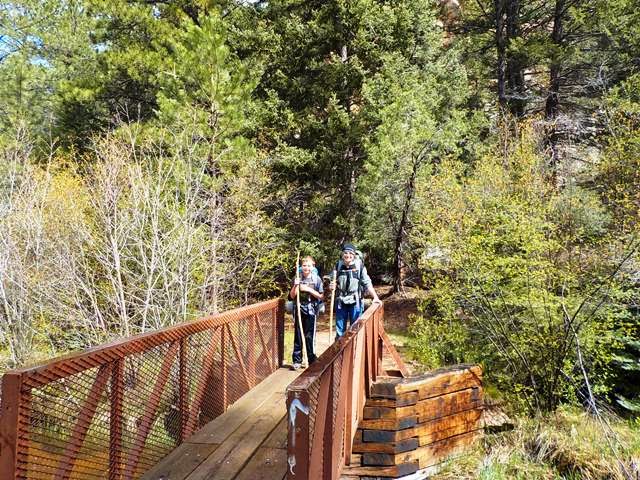 The first day is always the toughest when we go backpacking. Luckily, the weather was nice for the hiking portion of the day. 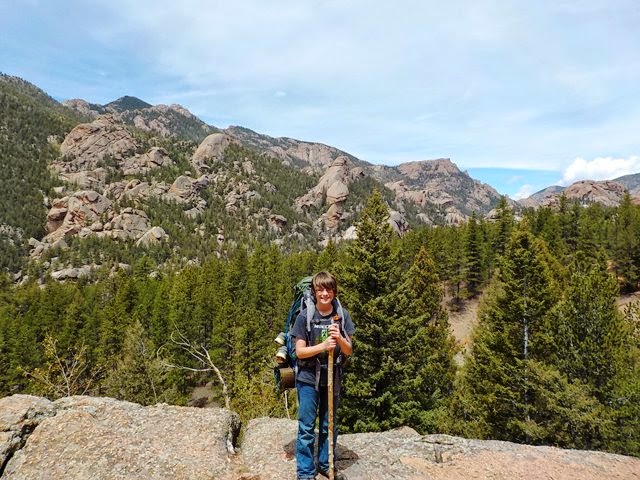 We made our way to our favorite lunch spot in front of a cave about 3/4 of the way to where we like to camp on the first night. 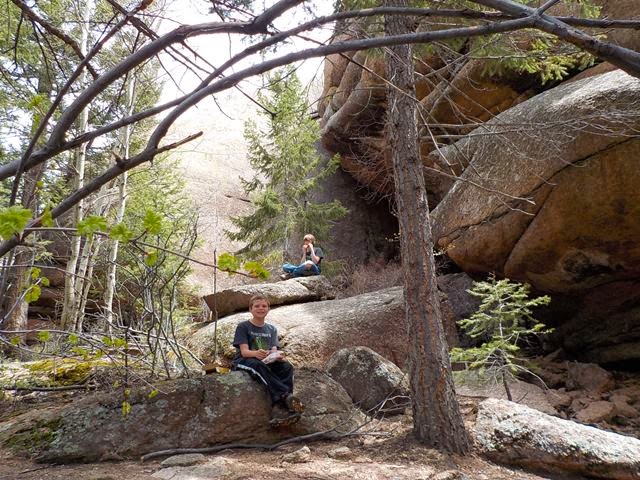 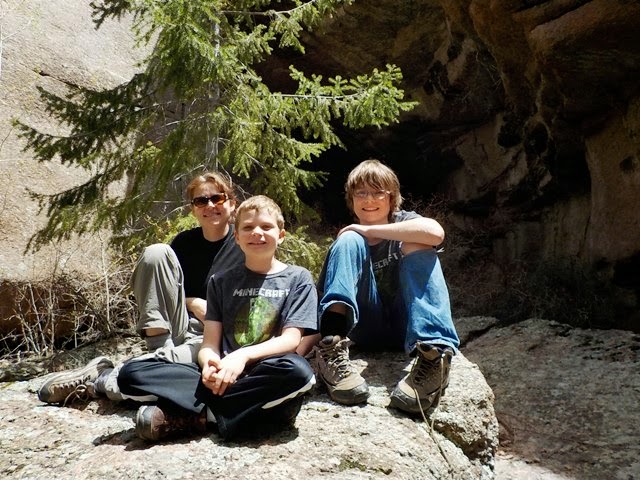 We made it to the "shaft house" area in the early afternoon and set up camp. 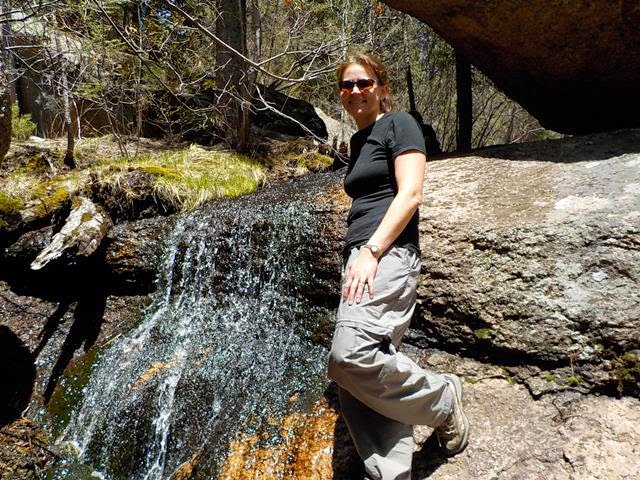 The kids collected firewood while I set up the tent and hung the trash from our bear bag. Mommy even got a little rest in the sun on a rock. 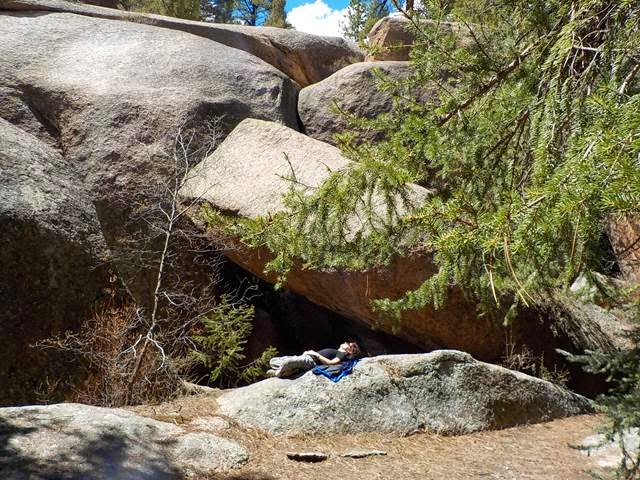 After setting things up, we did a little exploring. Even though we've been here, before the scenery is always amazing to me. My pictures really don't do the awesomeness justice. Like I've said before, you'll have to go yourself to experience the wonder of this area. 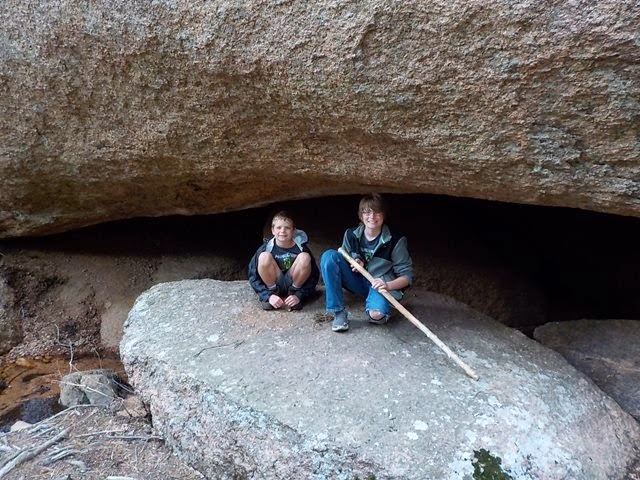 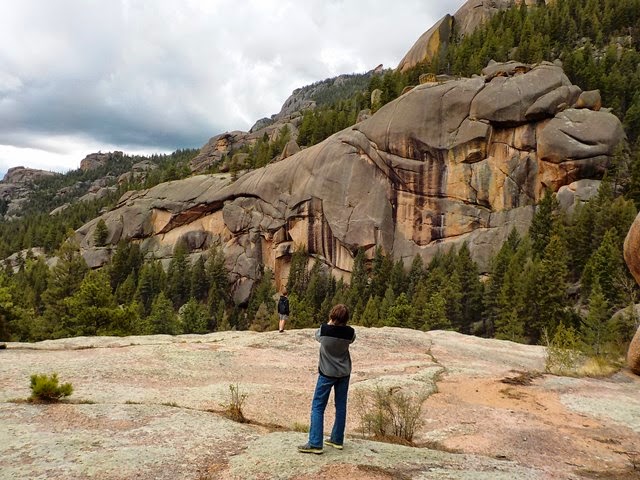 While doing our little exploration, the clouds started to move in. Rain drops started to fall. 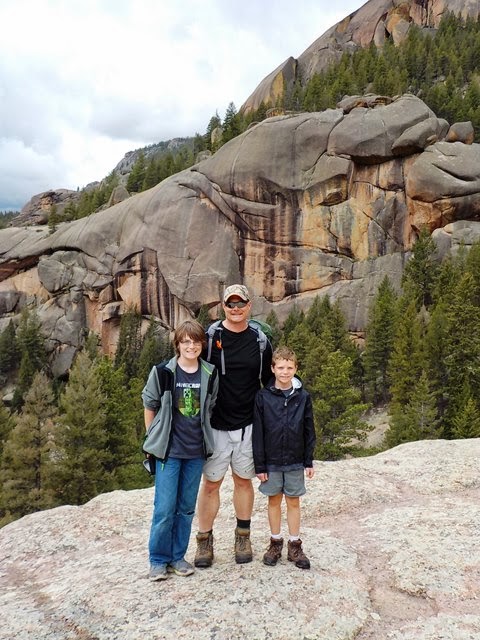 We decided to head back to camp. 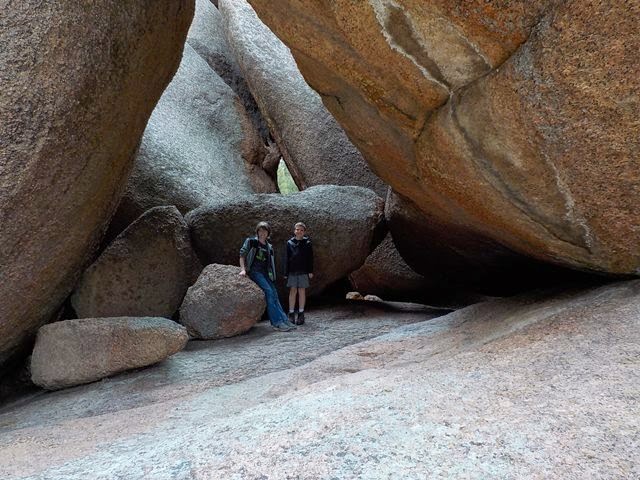 One cool thing about this spot was that there is a little cave with a firepit in the area. We decided to move our firewood into this little cave in case there was extended rain.

Turns out that this was a great idea, because almost as soon as we got the firewood in the cave, the rain really started coming down. We got significant hail. It rained. It rained some more. It rained even more.

Sorry about the blurry picture above.

Our fire lasted from about 5:00 until about 8:30 or so. The kids did a great job collecting that wood.

And the rain kept falling and falling. It fell some more. Everyone stayed dry and pretty warm in the tent, but that rain just kept falling.

Eventually the rain did stop. 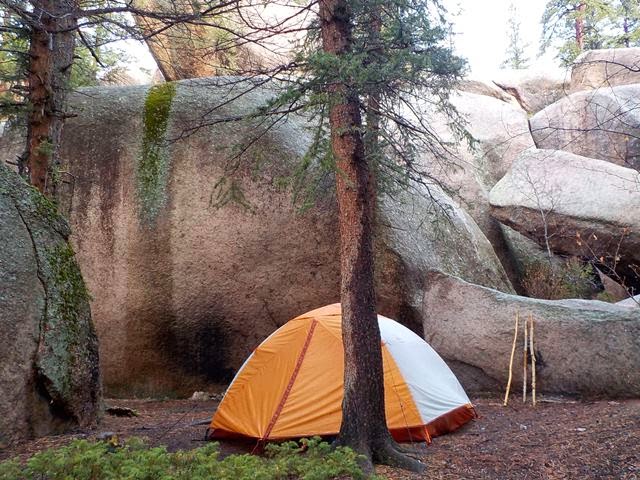 In the morning, we decided that we would skip the last day of camping. None of us particularly wanted to be stuck in the tent for hours upon hours another night. We didn't think we'd be able to find another cave to spend the time at our next spot. Plus, the rain fly was WET and I was not real confident that the weather would hold long enough to dry it out before the rain started again. 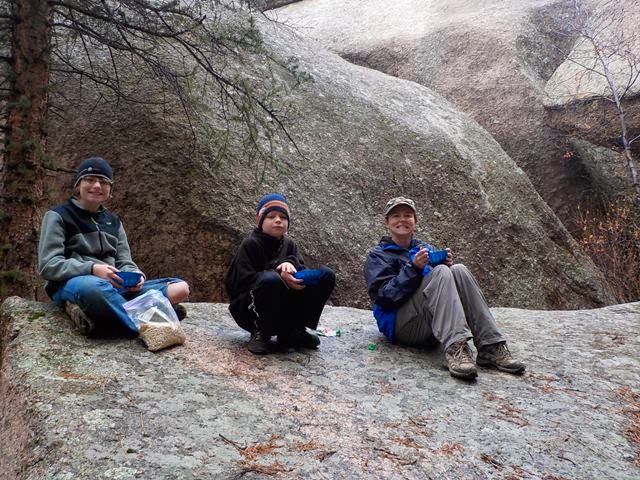 Our freeze - dried eggs were a delicious breakfast. We got packed up. My oldest son was kind enough to take the tent poles and the tent footprint to help out. Since the rain fly was soaked, it was a pain to get it packed up, but my son helping out was a great benefit.

I actually sent the wife and kids along ahead of me while I packed up my pack. They had about a 10 minute head start, and right when I started down the trail, it started hailing.

They had gotten to the Lost Creek dam work camp cabins when the hail started and they stopped to get rain gear on, so I caught them pretty quick. 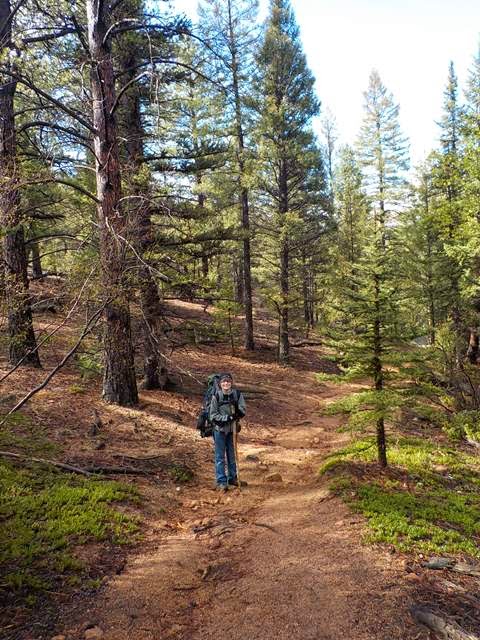 And then, all of a sudden, the hail stopped and the weather broke. Suddenly, there was only blue sky all around us. Colorado weather changes quickly.

In fact, it changed a few more times before we got all the way back to the trail head, although it didn't do more than sprinkle on us. 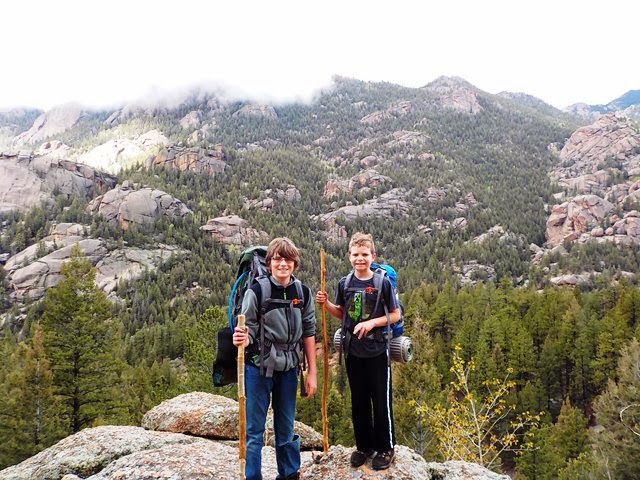 We made the trip back to the parking lot before lunch time. We had some snacks and drove to a restaurant for lunch. Pizza was yummy.

And so, we survived. When we returned, we found that our neighborhood had been hailed upon big time. A roofer guy came up to us with a flyer letting us know he would be willing to look at our roof, so apparently the hail was really bad.

As I was watching the Saturday night Blackhawks game on DVR later, I discovered that we had been under a tornado warning, which is very rare this close to the mountains. I guess we are lucky things were not worse than they were up in the Lost Creek Wilderness.

The Blackhawks lost, which is a huge bummer. They play again tonight to hopefully get the series back tied at 2. We'll see how that goes.