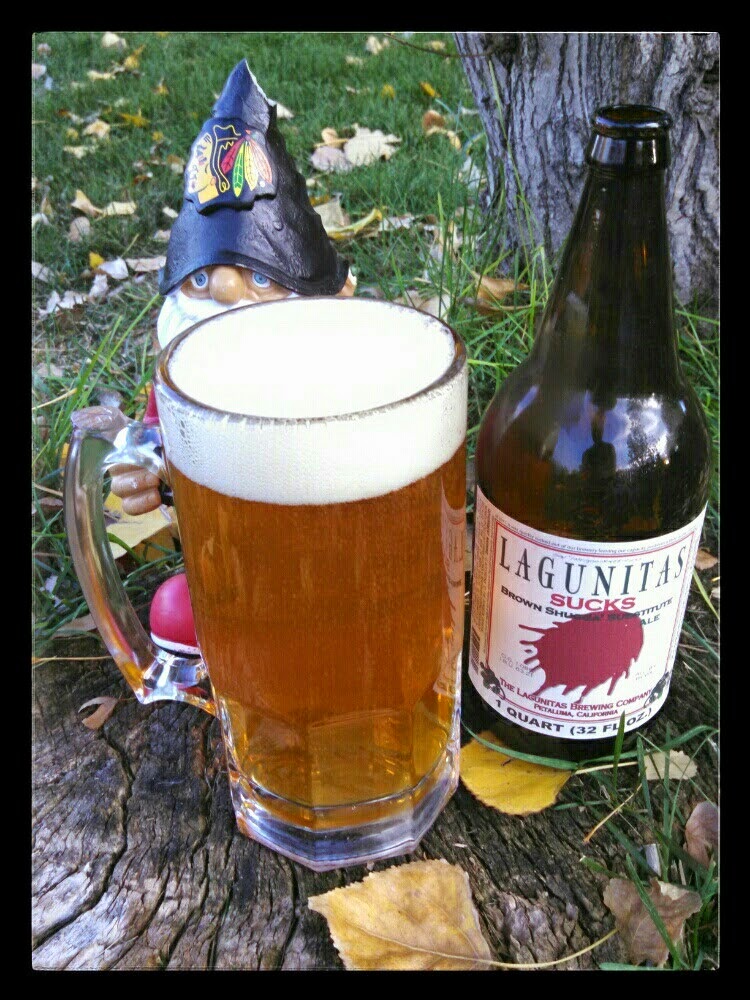 It doesn't, you know.

There is a story behind Lagunitas Sucks Brown Shugga’ Substitute. Lagunitas has a wildly popular Christmas seasonal called Brown Shugga'. It is a pretty big beer at about 10% abv. In 2011, Lagunitas was going through expansion construction at the brewery, and some brewing equipment was late arriving. As I remember the story, since Brown Shugga' was a such a big beer, it tied up the equipment more than Lagunitas could spare, so they were not able to get it out as a seasonal that year.

But, they had to get some seasonal out, and so they made Lagunitas Sucks to substitute for Brown Shugga'. The name is sort of an apology to fans of their regular seasonal. I don't think anyone actually thought that this was Lagunita's fault. The name was just a joke ... the beer company making fun of itself.


"We brewed this beer to replace our holiday release in the cold and capacity-bound winter of 2011. It was quickly sucked out of our brewery leaving our capactiy problem a little worse than before. Oh well... It's good to have friends! Cheers and share this one with an amigo!"

And, of course, this "substitute" became popular enough that Lagunitas decided to keep brewing it as a seasonal. This year, it made the Zymurgy Best Beers in America list at #6.

A few weeks ago, I was surprised to find this beer in my local liquor store. It was on my list last year and I never found it here in Colorado. This year, I've seen it several times. It comes in a quart bottle. I don't think I've ever seen a craft beer packaged in a quart bottle before.

It is a nice golden color with a long lasting fluffy white head.

Typical of a west-coast IPA, it has a very hoppy aroma with pine, citrus, and various tropical fruits.

It tastes nice and hoppy as well with a pretty good toasty malt presence.

It is medium bodied and fairly well carbonated.

It is a delicious IPA. I'm not sure it would make it to #6 without the compelling story behind the beer, but I guess that is ok. I'm glad I got to taste this beer.

Obviously, I will mark Consecration off my list. I might be able to find a way to obtain Backwoods Bastard. If I'm really lucky and diligent about paying attention to some of the places that get it, I have a slight chance of getting a taste of Pliney the Younger. The others probably are not going to happen.

At the very least, I will have tried all but 4 beers on the 2014 list, and that is very good in my opinion. Heck, I was fine with having 6 not-tried last year.