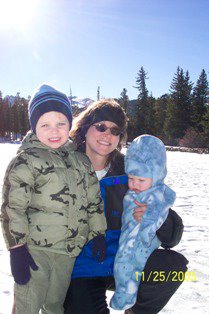 It is the Sunday after Thanksgiving. I, of course, have been ridiculously blessed and am very thankful for everything I have, but perhaps I am not as thankful as I should be. I think this is pretty typical in today's world. In fact, it has probably always been the case that people in general are not as thankful for the things they have as they should be.

Number one on my list of things of which to be thankful, is my wonderful family. My wife is much better than I deserve and my kids are the most wonderful in the world.

Tyler, my 3-year old, got me thinking when he came into my room Thursday morning. I was not quite ready to get up, but he was ready for me to be up, and he was there to help me get up.

Trying to buy time, I told him, "Tyler, it is Thanksgiving. Do you know what you are thankful for?"

"Everything," he said matter-of-factly. This was a very fine answer, but he did not leave it at that. He gave me examples of things he is thankful for. A lot of examples.

He started with the easy ones, "I'm thankful for Mommy, Daddy, Connor, the Lord God." This was a great answer as far as I am concerned. Those of you who read the bible might want to point out that the Lord God should be number one, but I don't think he was ranking, and the Lord God is still somewhat an abstract idea for a 3-year-old. He had answered correctly.

But that is not all... oh no, that is not all. He did not miss a beat and went on with extended family. "Grammy, Papa Lou, Grandma and Grandpa Shepard, Cody and Logan and Tera and Scott and Shean and Caden and Corey and Carey and Grandpa Dale." Very nice, so far it was pretty much a text-book answer.

Of course, I was not expecting much of a comprehensive list, but getting the unexpected is something I should be used to with a 3-year-old. He went on with things like "Our House, my school, my toys." He did not actually say my toys, he basically listed all of his toys. He is thankful for his trains, his little people farm, his castle, his cars, his books, his (this went on forever).

Here I am lying in bed, not quite ready to join the world, and here my 3-year old was talking on and on over one topic: things he is thankful for. It was not hours, but it sure seemed like it. He repeated some things a few times, but really not as much as you would think. In short, this kid is thankful for everything.

So, that is great. I have a kid who is grateful for what he has. Unfortunately, listening to his list made me realize that I am not always (probably not ever) as thankful as I should be. As I wrote above, I am just ridiculously blessed with everything wonderful I could ever wish for, and several things that I certainly don't need. I am in the wealthiest country in the world with a collective standard of living that is probably the highest of all time. I have a wonderful family and a great job and live exactly where I want to live. I don't have all the material things I sometimes want, but much more than I need, and I have the ability to give some of my stuff away to less fortunate people.

But, sometimes, not only do I forget to be thankful for what I have, sometimes I even find myself complaining about it. My house isn't big enough. My job doesn't pay enough. I don't get enough vacation. You get the idea. My guess is that you probably do the same thing. 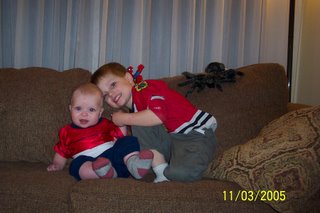 Today, Tyler brought home a spider named Theodore from school. Theodore is a big black, furry tarantula that the class has adopted. The class members take turns taking him home and record his adventures in a journal. Several of the entries include pictures. Apparently, Theo has had some interesting adventures. He seems to be a Broncos fan. I didn't know spiders were much interested in football, but now I do know.

For an arachnid, Theodore is pretty nice, although I was a little hurt when he didn't eat the crickets and beetles that I made him for supper. He wasn't real hungry and politely declined, so I guess I can't complain much. I guess I should have asked before starting to prepare supper. Luckily, Tyler's Spider Man likes to eat bugs and so they did not go to waste. And, I was pleasantly surprised that even when Tyler got his piece of Halloween candy for dessert, Theo didn't all of a sudden become hungry for candy.

After supper, we all played baseball in the living room. Well, actually Spider Man decided to sit out and watch, so we didn't all play. Theodore played catcher while I pitched. Tyler hit and Connor played outfield. Theo isn't much of an athlete, but he didn't let that stop him from having fun. It was a pretty good game even if Tyler and I did most of the work for all teams.

Then, Tyler and Theodore decided that they wanted to play hide-and-seek. Connor and I had no objections and even Spider Man said he would like to play, so we went ahead and played. Tyler hid with Spider Man and Theodore every time, leaving Connor and me to seek. To be honest, my three year old is not very good at hiding. Whenever the seeker(s) gets close, he just cracks up giggling. It probably didn't help that he had two friends to hide with this time. It was a fun game, just not all that challenging.

When we finished hide-and-seek, we went up to put Tyler in his PJ's and an amazing thing happened! Tyler disappeared and Super Man showed up! Yes, Super Man. The Super Man. So, not only did Theodore have the distinct honor of spending quality time with my two kids, but also got to fly around the house with Super Man.

Tyler, Theo, and I wrote in Theodore's journal while Mommy ate dinner (Mommy had to work late talking to people about insurance and garbage like that.) We wrote from Theodore's perspective which is completely different than everyone else has done so far. Ours is also a bit longer than most.

Mommy put everyone to bed. It was my turn, but she stole it from me. I'm not sure why, but my place is to do as I am told... not question decisions made by my superiors.

Anyway, I think Theo had a nice time visiting us. I know Tyler and Connor enjoyed having Theo over. Even Mommy seemed to like the tarantula, which sort of surprised me since even crickets freak her out and Theo is a BIG spider. I hope he comes back to visit sometime when we have more than a night to play with him.
Posted by ESheppy at 11/03/2005 09:15:00 PM 1 comment: