Jim extremely under when by lulu PCS. I must he tumble hind unlay, bemire most of Me words A mite do not end up looking like wets intended. Sometimes, the st-pin thing yet's Me worn correct and then changes it when ) sure to the next wad.

Curlier today I tried writing to this boy with ^ PDA. It turned out even wise. I guess the tablet technology might be much letter to those with good handwriting. Wow! The sentence I just write was actually what A tried to write. I must be getting your ht this!! MAYBE Not.

wall, I yours that shins his been enough of this. 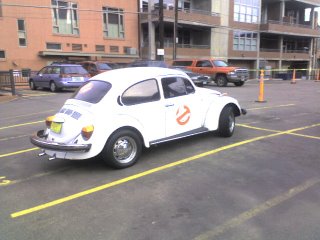 I saw a VW bug today with the Ghost Busters logo on its side. I took a picture of it.

When I got into work, I mentioned the sighting to Wes, my coworker. He looked it up... Ghost Busters came out in 1984.

Why would someone in 2006 have a Ghost Busters logo on their car?

Jerry, another coworker, had a theory. He asked if the car was dressed up for Halloween. I'm not sure I like the idea of weirdos 'dressing up' their cars for Halloween. Of course, have you ever met a VW Bug owner who was not at least just a little bit strange? It seems sort of like something my inlaws might do. They are not Bug owners, but they certainly are weird enough to do something like 'dressing up' their cars.

I can not imagine a person who loved that movie enough to have decorated their car as a tribute to the movie. I enjoyed the movie, but come ON. Maybe right after it came out, but not 22 years later. Of course, let's not forget what freaks Bug owners are in general.

My favortite theory is that there are real Ghost Busters running around downtown Denver. Lodo is pretty old with documented ghosts in several old buildings. I am pretty sure Molly Brown haunts an old brothel in town. Or maybe it is Molly Brown's old house that she haunts. Molly Brown lived in Denver after she went down with the titanic, didn't she?