A Blonde, two Redheads, and a Brunette

For Christmas,  the Beer Model's parents were in town. While watching football, I got her dad a flight of SheppyBrew beers.

While getting the beers, the beers I had on tap reminded me of the post I made a long time ago ... A Brunette, a Read Head, and a Blonde.

I told him his flight was One Blonde. Two Read Heads. One Brunette.

Mr. Awesome Merican Lager was the blonde. Wien Zerschlagen and Dudocs Red IPA were the Reds. X-Mas Ale 2022 was the Brunette. 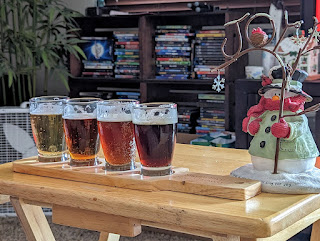 Another Whole Chicken in the Vortex 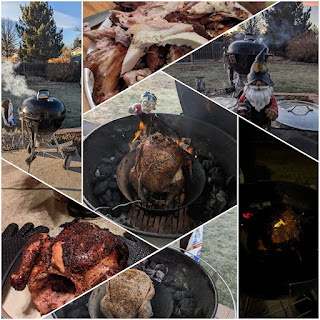 It's been quite awhile since I've cooked a whole chicken.
I think the last time (before this time) was Whole Chicken in the Vortex.
I told myself at the time I wanted to try cooking inside the vortex cone again. I've just never gotten around to it.
Until a couple Saturdays ago.
And this one turned out better than last time. In fact, I think this might be my best whole chicken ever.
For a rub, it was basically just SPG. (Salt / Pepper / Garlic).
I set up the vortex just a bit off-center with unlit charcoal all around. I lit about 3/4 of a chimney and placed that in the middle of the unlit coals, allowing the fire to move both directions around the cone.
Read more »
Posted by ESheppy at 12/26/2022 12:06:00 PM No comments: 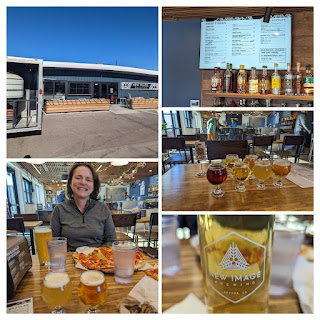 As I type this, M is for Mobcraft Dee Tacko just posted.
We only started this 4th round of the A to Z Denver Breweries project in June with A is for A Bit Twisted Brewpub.
And ... here we are already half-way through the alphabet, needing an "N" brewery.
As I keep saying, the SheppyBrew Beer Model (aka my wife) is really pushing this process along.
This past Saturday, the Beer Model surprisingly agreed to play Pickle Ball in the cold. Then, she wanted to go hit our "N" brewery for lunch.
In round 1, we did N is for New Terrain Brewing Company. Round 2: N is for New Image Brewing Company. Round 3: N is for Novel Strand Brewing Company.
What did we decided to hit this time?
N is for New Image, Wheat Ridge
Read more »
Posted by ESheppy at 12/23/2022 07:55:00 AM No comments:

M is for Mobcraft Dee Tacko 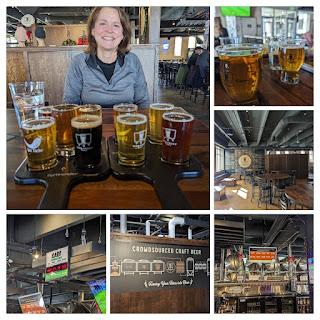 My wife (aka the SheppyBrew Beer Model) and I played Pickle Ball a couple Sundays ago.
I don't quite get the popularity of Pickle Ball. To me, it is basically tennis for people who can't move well enough to play tennis.
But, the wife likes it. It is fun enough. I suppose it is ok exercise. So, we play.
After our Pickle Ball adventure, the Beer Model wanted lunch, and we decided to head to downtown Denver for our next of the A to Z Denver Breweries.
Last time we did L is for Little Dry Creek Brewery, so this time it was time for an "M" brewery.
Big M. Little M. What begins with M?
M is for Mobcraft Dee Tacko
Read more »
Posted by ESheppy at 12/20/2022 07:48:00 AM No comments: 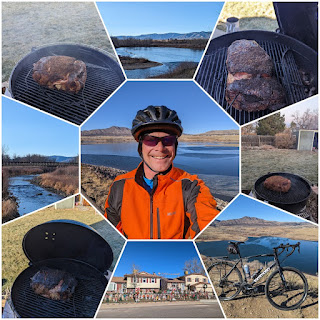 As I mentioned in #10Everestsin2022, I went on a fairly long bike ride last Sunday.
62.8 miles to keep my #MetricCenturyEveryMonth streak alive.
I had committed to smoking a Pork Butt, and as you probably know, smoking a Pork Butt is an all-day process.
Luckily, like a lot of the things I do on the weekends, smoking allows for multi-tasking.
As long as I set up the kettle to burn long enough at about the right temperature, it doesn't really take a whole lot of effort on my side.
I just let the fire and smoke do its thing. I don't really have to do all that much for most of the hours the meat in on the smoker.
Read more »
Posted by ESheppy at 12/18/2022 09:13:00 AM No comments: 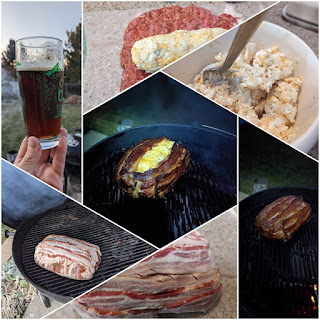 So ... I've only made Fatties a couple of times in my life, both of them documented on this blog.
See Easter BBQ and Fatty!
I decided to make another one a couple weekends ago, the same day I brewed my X-Mas Ale.
In case you don't know ... a fatty is ground meat surrounding a filling wrapped with bacon.
In my case, the filling was a mixture of cream cheese, cheddar cheese, and onion with spices.
The ground meat was 1 (or more) pound each of ground Italian sausage and ground beef.
Last time I made a Fatty, the filling burst out of the side, making a little mess and making me lose a little of the gooey goodness.
Read more »
Posted by ESheppy at 12/16/2022 06:19:00 AM No comments: 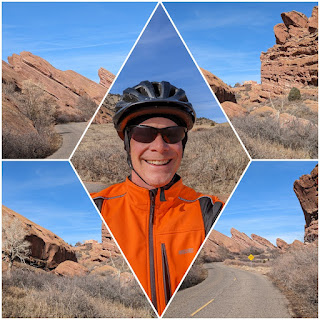 I have not ridden a whole lot in November or December, but as of my bike ride yesterday, I met my elevation goal for the year ... #10Everestsin2022.
It was also over 100 km, so I continued my #MetricCenturyEveryMonth streak.
I passed up my original 5000 mile goal, and will end up with over 6000 miles.
So ... everything I said I was going to do on my bike this year, I've accomplished.
Some of those miles were on the stationary bike at the gym, but really the vast majority were actual outdoor miles on my various bikes.
I expect I'll leave the Strava goals the same in 2023, so I'm aiming for another 6000 miles in 2023 and another 290,032 feet elevation gained.
Read more »
Posted by ESheppy at 12/12/2022 06:15:00 PM No comments:

When I started writing the post BJCP 2021 Style Guidelines, my intention was to set myself up to brew every style in the 2021 BJCP Guidelines next year.

However, as I went through the exercise, I realized that I don't really want to try to brew every style next year.

First ... there are 3 entire categories that I have not brewed a single beer in. AND ... I am missing enough styles that there is no way this is a one year project.

Second ... there are lots of styles I don't really have a desire to brew.

The categories I'm missing are 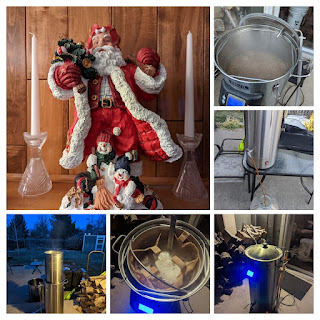 Every year since I started brewing in 2009, I've brewed a special X-Mas Ale.
Every year, the beer is a similar base with some "Christmasy" flavoring added.
2009 was an extract kit with Cherries, Almond Extract, Vanilla Extract, Cinnamon, and Cloves.
Over the years, I 've done a Hazelnut X-Mas Ale, Peppermint X-Mas Ales, Cherry Pomegranate  ... all kinds of things.
I've even brewed just the base beer a couple of times.
I got started a bit late this year (much like last year). Generally, it is ideal to have this beer ready for Thanksgiving.
However, this year, I didn't even decide on what I would make until a few days ago. I brewed the beer this past Sunday.
X-Mas Ale 2022
Read more »
Posted by ESheppy at 12/05/2022 06:37:00 AM No comments:

Back in late 2012 (it blows my mind that it was ten years ago) I started the effort of making sure I had brewed at least one beer in every category of the BJCP Style Guidelines.

I made it through all the categories, and shortly after I did, the BJCP made a fairly major update, which meant there were new categories to hit.

I know I knocked out most of the categories, but I'm not 100% sure I hit them all. I think I did, but I may have missed one or two. (EDIT ... after going through the list, I see now that there are 3 that I missed. I'm going to have to work on fixing that)

Regardless, we now have another new version of the guidelines. BJCP 2021 Style Guidelines. The 2021 version isn't as much as a total overhaul that 2015 was, so I think I've probably hit as many of the categories as I had before.

But, I thought I'd take some time to take inventory on BJCP Styles that I have and have not brewed ...