When I started writing the post BJCP 2021 Style Guidelines, my intention was to set myself up to brew every style in the 2021 BJCP Guidelines next year.

However, as I went through the exercise, I realized that I don't really want to try to brew every style next year.

First ... there are 3 entire categories that I have not brewed a single beer in. AND ... I am missing enough styles that there is no way this is a one year project.

Second ... there are lots of styles I don't really have a desire to brew.

The categories I'm missing are

There are styles in each of those categories that I would like to drink and therefore will brew.

As I mentioned,  I have brewed a beer that by name should fit (Gnaughty Gnome English Coffee Stout), but doesn't really go nicely into any of the styles in this category.
Stouticus has used lactose in some of the versions of its recipes, so it could theoretically be called a "Sweet Stout", but its American Hops, bigger ABV, and overall balance isn't quite right for this style. Plus I use Stouticus as my American Stout.
So, I'll just design a recipe to fit in one of the categories. Of the styles in the category, the one I'm most interested in brewing is 16B. Oatmeal Stout, and so ... that is probably the one I'll brew to satisfy this category.

As the name suggests, these are pretty high ABV beers, and that isn't really "my jam". I didn't realize until just now looking at the guidelines that "17B. Old Ale" can go as low as 5.5% ABV. Actually, some of my X-Mas Ales are "Base Beer Only", and I think maybe they would actually fit in this category.
However, I'll design a new recipe for this. I probably won't let it age as long as it should to be considered "old". We'll have to see if I can remember to bottle some to try later.
I don't think I've ever had a "Old Ale" to calibrate to. Colorado's Avery brews a beer they call Old Jubilation, which is listed as a commercial example in the guidelines. Maybe I can find it to give it a try.
I found a recipe on the AHA website called Clan MacIntosh Old Ale, which I can use as a sample recipe. However, it is much bigger than I want to make, so I'll scale it down.

I actually have a style of beer I'm excited about brewing in the Monastic Ale Category.
When the Beer Model and I visited the Bruz breweries, (see X is for Bruz Off FaX and Z is for BruZ Beers), I thought I'd be able to get one of their "Singles", but I think they were out. Regardless, I've been thinking for quite awhile that a  thought brewing a 26A. Belgian Single is a beer I'd like to brew.
"A blond, bitter, hoppy table beer that is very dry and highly carbonated. The aggressive fruity-spicy Belgian yeast character and high bitterness is forward in the balance, with a soft, supportive grainy-sweet malt palate, and a spicy-floral hop profile."
I found an AHA recipe Chimay Dorée Clone, that I will probably use as a starting off point for my recipe. 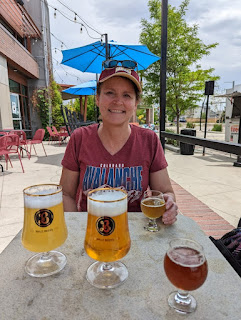 After I brew these beers, I'll think about looking through for other styles to brew in 2023.
Keep an eye on Sheppy's Blog: BJCP Goal and you'll see how this whole thing goes.
As always keep watching the regular SheppyBrew Channels to see what is happening with my BBQ, Beer, Biking: SheppyBrew's Facebook Page; Sheppy's Twitter Feed; SheppyBrew's Instagram Page; and SheppyBrew's Website.Of course, don't forget to visit this blog often as well!
Go Blackhawks!
Posted by ESheppy at 12/08/2022 07:08:00 AM