X is for Bruz Off FaX 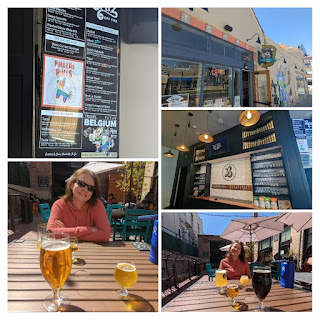 Last week I posted W is for Wah Gwaan Brewing Company.
If you've been following along on the A to Z Denver Breweries series of posts, and are familiar with the English alphabet, you know that it is time for us to post about an "X" brewery.
Well ... according to the Colorado Brewery List ... there are no breweries in Colorado which start with the letter X.
In round 1, we took artistic license with X is for WestFaX Brewing Company.
In round 2, we shamelessly cheated with X is for Mad Jack's [JaX] Mountain Brewery.
This past Saturday, the SheppyBrew Beer Model and I had to take artistic license again with ...
X is for Bruz Off FaX 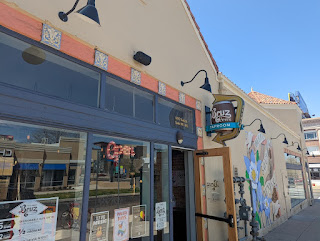 Bruz Off FaX is one of the tap rooms of Bruz Beers. 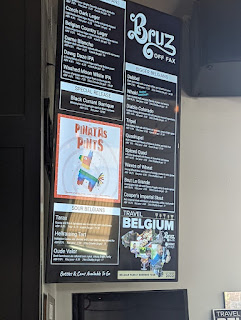 This taproom is located at 1495 York St  #101 Denver, Colorado 80206, just on the corner of Colfax and York in the heart of the Colfax Avenue corridor.
As the website points out the tasting room is just blocks from some of Denver’s best attractions like the Botanic Gardens, City Park, Fillmore Auditorium, among others.
They are open from 2pm to 10pm every day. 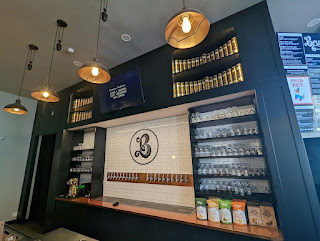 There is a lot more space inside than I thought and there is a very nice beer garden area.
Saturday, they were running a "Side Car Special", which basically meant that with each pint, a few taster was included. 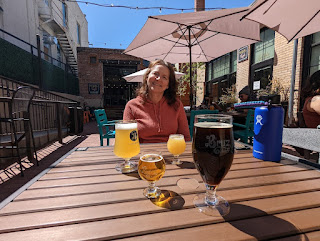 We basically concentrated on the "Sessionable Belgiums" section of their beer menu.
Between the two of us getting pints and tasters we tried: 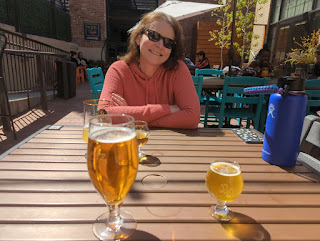 There was a food truck, and apparently they serve pizza in the tap rooms, but we brought our own lunch from home.
If you'd like to see their food options and food truck schedule ... check out the "Eats" section of their website.
The beers were all pretty good, and it appears to be a great place to hang out ... especially when the weather is nice.
Check them out if you find yourself in the neighborhood.
And now ... as you probably realize ... we need to come up with a "Y" and then "Z" brewery to finish up round 3 of the A to Z Denver Breweries series of posts.
Spoiler alert ... we won't be traveling to the Yampa Valley to check off the "Y" brewery. So, we'll have to take a little artistic license again.
Bookmark Sheppy's Blog: A to Z ... and you'll see what we pick.
Can you believe we're almost done with round 3?
Go Avalanche!
Posted by ESheppy at 5/03/2022 05:42:00 AM