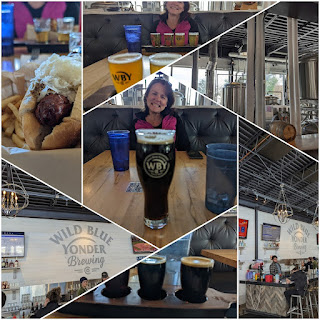 We're almost done with round 3 of the A to Z Denver Breweries series of posts.
Since mid - April, we've done V is for Vision Quest Brewing Company, W is for Wah Gwaan Brewing Company, and X is for Bruz Off FaX.
After "X" comes "Y", so obviously we needed to come up with a "Y" brewery.
In round 1, we went to Y is for Yak and Yeti Restaurant and Brewpub.
In round 2, we used Y is for Over Yonder Brewing Company.
As I mentioned in X is for Bruz Off FaX. we wouldn't be traveling to the Yampa Valley to check off the "Y" brewery. So, we'll have to take a little artistic license again.
The SheppyBrew Beer Model scanned the Colorado Brewery List, and came up with a few possibilities. When it came right down to it, there was only 1 real choice ...
Y is for Wild Blue Yonder Brewing Company 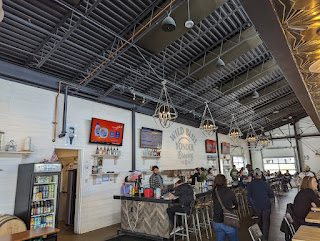 Wild Blue Yonder Brewing Company is a Brewpub in Downtown Castle Rock at 519 Wilcox St, Castle Rock, Colorado 80104.
It is a beautiful building with a nice Beer Garden. Since they are a fully functioning restaurant they are able to serve local wines, ciders, and spirits from around Colorado in addition to their own beers. 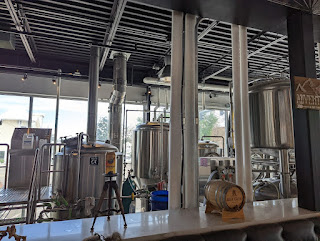 The location has an interesting history. I won't go into it here, but if you're interested, check out their "About Us" page.
We headed over there last Saturday afternoon, while the Chuck Roast was in the crock pot.
Because of the weather, we were not able to enjoy the beer garden. I feel like we have to head down to Castel Rock again some time to check that out. 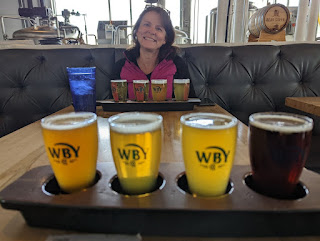 We started off ordering a couple of flights from their beer menu that included: 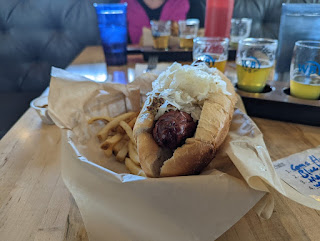 One thing I just noticed while typing this up is that the online menu includes links to the untappd profile of each beer.
I wish I would have realized this sooner, but something to keep in mind if you're one to check beers in.
They also have a very nice food menu. I had a Elk Camino Bratwurst. The Beer Model had The Gouda, Shoulda, Woulda grilled cheese sandwhich.
Her food choice was better than mine. 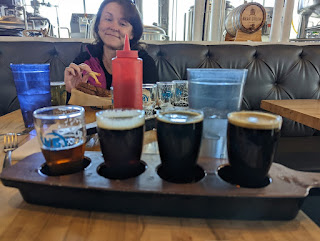 I did order another flight, which the Beer Model didn't really partake in: 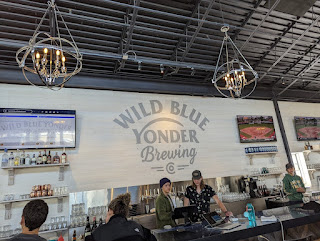 I really enjoyed most of the beers. I probably should not have ordered the Mango Tango Down as I don't really generally like Milkshake IPA's, but I'm sure those who like the style would love it.
The Das Bier took me by surprise with the fact that it is aged on toasted American oak. I'd prefer a regular Helles, but it was the Beer Model's favorite.
I thought the rest of the beers were great.
As I mentioned above, I would really like to come back here. 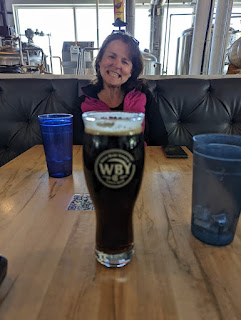 Check it out yourself if you find yourself wanted lunch or dinner in the Castle Rock area.
They are open daily from 11am to 9pm.
So ... now we have one brewery left to finish round 3 of the A to Z Denver Breweries series of posts.
Big Z. Little Z. What begins with Z?
According to the Colorado Brewery List, we have some choices. I have one brewery in mind, but I may change my mind.
If you'd like to find out what I pick ... stay tuned on Sheppy's Blog: A to Z and you'll see what we pick.
Go Avalanche!
Posted by ESheppy at 5/27/2022 06:52:00 AM