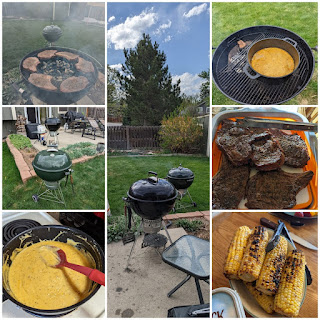 This past Sunday was Mothers' Day.
My wife's parents were visiting so we had two mothers in the house.
My older son also came home from college.
The two mothers decided they wanted grilled ribeye steaks for their dinner, which at our house means I had to cook.
As I generally reverse-sear my steaks, the 6 ribeyes fit just perfectly around my vortex on the 26 inch kettle.
In order to get sides done, I needed to pull out both of my Weber Kettles, and do the sides on my 22 inch.
The main side I made was the dish I made for Easter, Pecan Smoked Potatoes Au Gratin. I also grilled some corn. 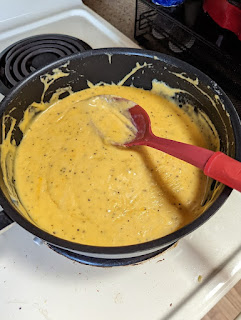 Fairly early in the day, I prepared the potatoes / cheese dish in my cast iron Dutch oven, and let that sit in the fridge until ready to put it on the kettle. 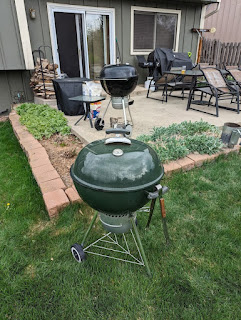 If you want the recipe for that ... see Pecan Smoked Potatoes Au Gratin. The only difference this time was that I used hickory wood instead of Pecan. 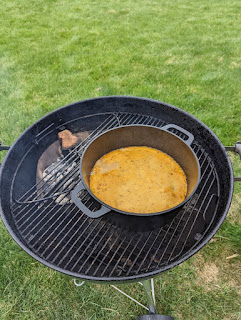 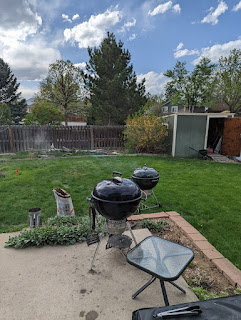 Around half an hour before dinner, I put the steaks on the kettle around the perimeter.
I let them smoke until I measured around 125 on the least done steak. 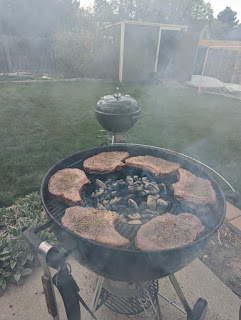 Then, I seared the steaks a couple at a time for a few minutes on each side.
The steaks turned out good, but not great. They were a little inconsistent on doneness. Oh well. everyone said they liked them anyway.
When the potatoes were done, I pulled off the Dutch oven and let it sit for awhile. That thing really holds heat well.
Then, I put the corn on the 22 inch kettle to indirect cook for a bit and then over the fire for a bit. 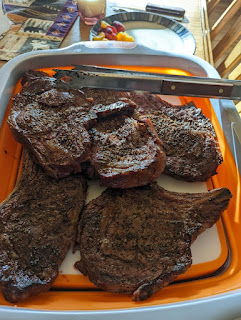 I thought the potatoes turned out great. The corn and steak turned out good.
It was pretty fun to cook on both kettles. 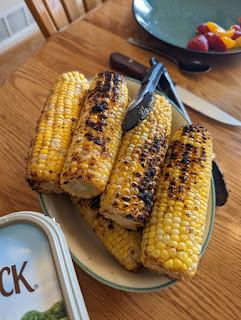 As always stay tuned on the regular SheppyBrew Channels to see what is happening with beer and other things: SheppyBrew's Facebook Page; Sheppy's Twitter Feed; SheppyBrew's Instagram Page; and SheppyBrew's Website.Of course, don't forget to visit this blog often as well!