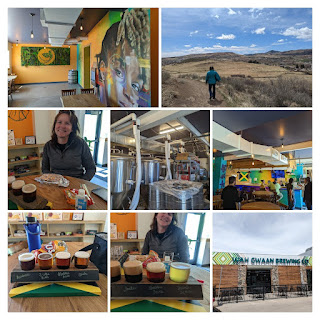 Can you believe we're already at "W" in round 3 of our A to Z Denver Breweries series of posts?
Back in February of 2015, I was embarrassed by the huge number of Denver Breweries that I had never visited.
It struck me that if I went down the list, the starting letters of the brewery names represented almost every letter of the alphabet. That was when I started my A to Z Denver Breweries Project on this blog.
I finished Round 1 in February of 2019.
At that point, I started back at A, and got through round 2 by November of 2020.
And ... now here we are at "W" of round 3.
As I mentioned in V is for Vision Quest Brewing Company, we actually had quite a few "W" breweries to choose from.
Saturday, we picked one ...
W is for Wah Gwaan Brewing Company 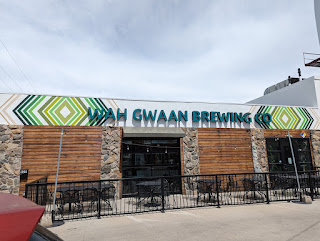 Wah Gwaan Brewing Company is located at 925 West 8th Ave. Denver, CO 80204, which is actually the former location of "I is for [The] Intrepid Sojourner Beer Project".
Wah Gwaan opened in 2020, which would have been shortly after Intrepid Sojourner  closed. 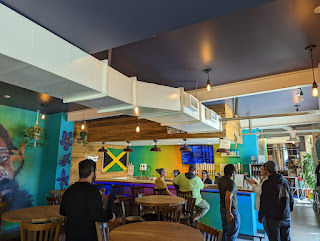 "In Jamaican Patois (English dialect spoken in Jamaica), “wah gwaan” is commonly used as a greeting and means “how are you/what’s up.” We chose this phrase for our brewery because it reflects our friendly ambience and sense of community.
We embody traditional Jamaican culture through distinctive, vibrant beer flavors and a  welcoming atmosphere. We are committed to incorporating sustainable practices throughout the brewery and the local community. We plan to share authentic Jamaican culture through education, taproom events, and community outreach—and ultimately become a leader in sustainable brewing business practices while increasing diversity in the industry." 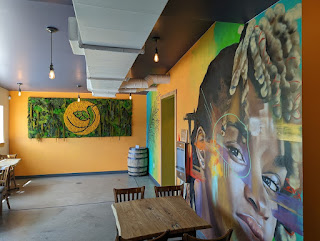 The artwork in the tap room is pretty awesome looking.
It's a nice little tap room with a homey feeling. We arrived shortly after opening time, and there were already quite a few people enjoying the Wah Gwaan beers. 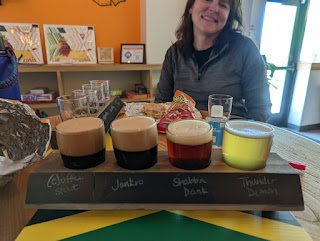 The SheppyBrew Beer Model and I each started out with a flight of 4 beers. Then we ordered a third flight of beers that the Beer Model didn't think she'd like.
We had most of the beers on the tap list. 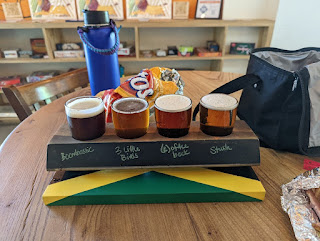 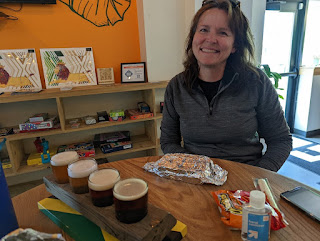 It was a nice little lunch, and the owners / bartenders were extremely friendly. It is a great local place for a few beers.
I'm glad this is the "W" brewery we picked. 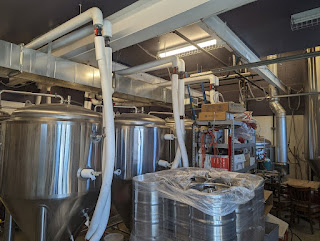 So ... now we're up to "X" again.
Unsurprisingly, there are not any breweries that actually start with the letter "X" on the Colorado Brewery List, so we'll have to take a little artistic license for the next brewery.
Whatever brewery we pick, it will have to be a better connection to "X" than X is for Mad Jack's [JaX] Mountain Brewery.
Stay tuned on Sheppy's Blog: A to Z to find out what we pick.
Posted by ESheppy at 4/27/2022 06:40:00 AM