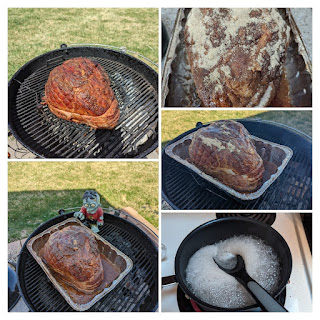 As I mentioned in Easter Saturday Ribeye Roast, I made the mistake of asking my kid what he wanted for Easter dinner.
His answer was "Ham".
I guess the good news is that I've cooked enough "Double Smoked" Hams over the years that I've pretty much have it down.
Basically I follow the "recipe" that I used for the 2019 Easter Ham and the Christmas of 2018 Double Smoked Ham.
The only real difference this time was that I did the actual cooking on the Weber Kettle.
Just as I did last time, I created a glaze. The ingredients were a little different, but it was the same idea. 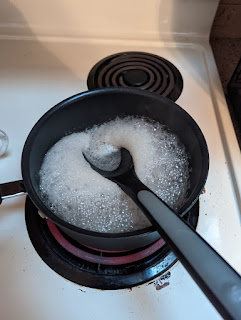 Then I made a little sugar-based "rub". 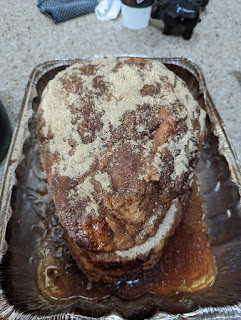 I poured the glaze over the ham. Then I put the sugar rub on over the glaze.
I left the ham in a roasting pan and put that on the kettle. 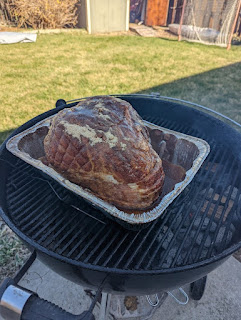 Then, I just let the ham cook at about 270ish to 325ish for about 3 hours in the roasting pan. Every once and awhile, I took some of the liquid on the bottom of the pan and "basted" the ham. 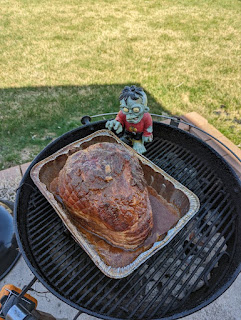 After about 3 hours, I took the ham out and placed the ham directly on the grate.
It finished off for about 30 to 45 minutes. 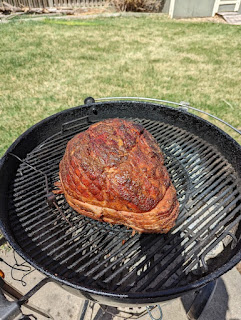 Then, we let the ham rest for about 10 minutes before we sliced it and had Easter dinner.
It was good. My wife's sides were even better.
We had a bunch left over, and I even vacuum sealed / froze some of it.
Good stuff. I think this is the best way to make a ham.
As always, you can always keep an eye on the regular SheppyBrew Channels to see what is happening with beer and other things: SheppyBrew's Facebook Page; Sheppy's Twitter Feed;SheppyBrew's Instagram Page; and SheppyBrew's Website. Of course, don't forget to visit this blog often as well!