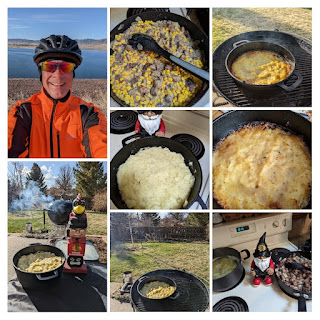 Last time I made brisket, I vacuum sealed and froze most of the point.
See Superbowl Brisket.
Since then, the brisket point has been sitting in the freezer waiting for an opportunity for me to use it in a relatively quick meal.
This past weekend, my wife and kid wanted to go out and watch The Batman, and as it is a long movie, I knew I wouldn't have a whole lot of time in the afternoon to prepare dinner.
I thought a Shepherds (Shepard's) Pie would be something good to make with left-over brisket.
This is something I thought would be great to prepare in the morning and just pop on the Weber Kettle for an hour or so.
So ... Saturday morning, I made some mashed potatoes, and heated up the brisket in a gravy with onion and corn. 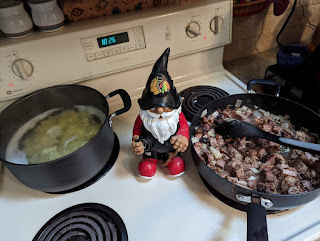 I don't really have recipe. I just put in what seemed like appropriate amounts of everything. 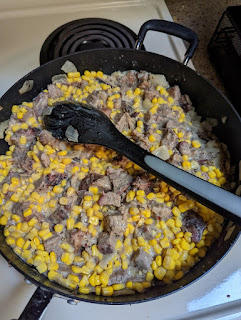 The gravy / brisket / corn mixture went into my cast iron Dutch oven. The mashed potatoes went on top.
Then, I let the whole thing sit in the fridge. 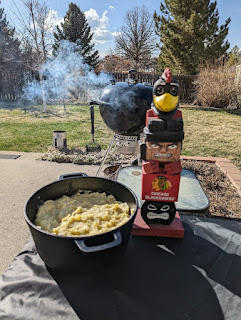 When we got home from the movie, I fired up the kettle with the "vortex".
I also put in a little chunk of Apple wood. 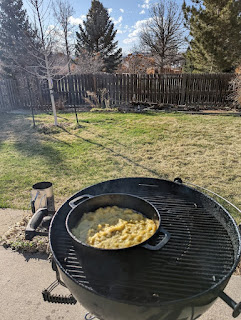 I let the Shepard's Pie cook for around an hour or so at a fairly hot temperature. I let it go until the potatoes started to look golden brown and the mixture was nice and bubbly. 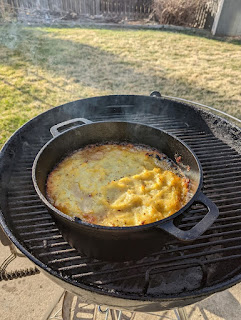 After I pulled the Dutch oven off the kettle, I let it sit for about 15 minutes before we served it.
It was awesome. I've always loved Shepherd's Pie, but the brisket made it even better than I ever remember it being before.
I even had some pie left over for lunches this week. Yummy! 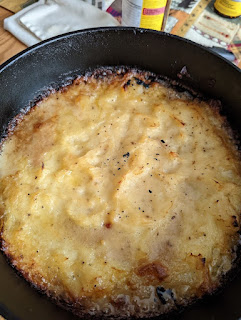 I'm fairly certain I will make this again. It is a great way to use up left-over beef. I even think a pulled pork Shepard's pie would be pretty awesome.
Bookmark Sheppy's Blog: Shepherds Pie, and you can see when I do it again.
As always stay tuned on the regular SheppyBrew Channels to see what is happening with barbeque, beer, biking and other things: SheppyBrew's Facebook Page; Sheppy's Twitter Feed; SheppyBrew's Instagram Page; and SheppyBrew's Website.Of course, don't forget to visit this blog often as well!
Posted by ESheppy at 4/06/2022 06:52:00 AM