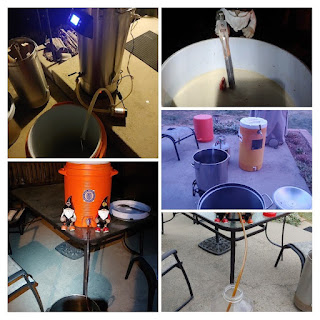 It blows my mind that we're already in December and so Christmas is just around the corner.
This also means that it is time to get the Annual SheppyBrew X-Mas Ale made.
Actually ... it is sort of late to get the X-Mas Ale brewed. I usually like to be drinking it by Thanksgiving.
Last year, I had the X-Mas Ale brewed on Learn to Homebrew Day, which is the first weekend in November.
For various reasons ... I didn't get around to brewing the 2021 version until this past weekend, about a month later than last year's version.
I even considered not making an X-Mas Ale this year, but eventually, my desire to maintain the tradition overroad my laziness. It might be ready later in the year, but ... Oh Well ...
X-Mas Ale 2021 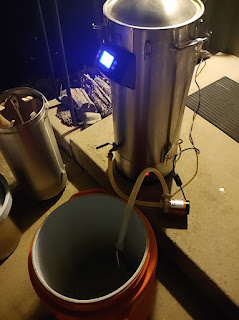 This year, I decided to do a sort of "graf" for my X-Mas Ale. If you've never heard of "graf" it probably means you're not a Stephen King geek. A "graf" is a cider / beer hybrid that seems to have originated from The Dark Tower series.
My version uses Cherry Pomegranate juice concentrate. I'm not sure how much the flavor will come through. I'll let you know what I find out. 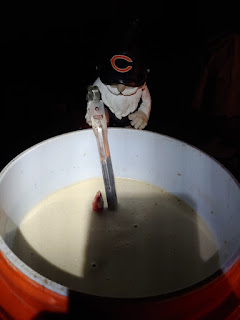 Since the X-Mas Ale is a little higher in OG than my usual batch, I decided to use the old-school mash tun for the mash, similar to what I did for Caliente Fuerte Mexican Stout (Batch 300).
I did use the Foundry as a hot liquor tank ... setting the timer to start heating overnight so it would be ready to go when I got up in the morning. 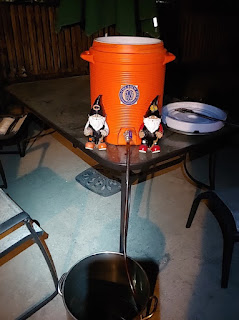 I was up before 5 AM and had the mash started at around 4:50 AM. I kept back about a gallon of water for a batch sparge.
My first runnings went in the Foundry to start getting the wort to boiling while doing the batch sparge. 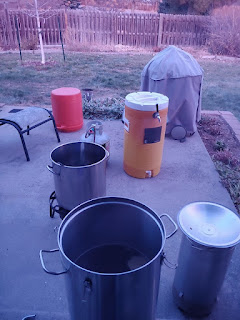 I got the second runnings heated up to boiling on the propane boiler, pouring it into the Foundry so that getting to a boil would not take as long.
As it turned out, I was low on volume and so added some water to dilute. This brought the temperature down and delayed the boil start.
The boil timer started around 6:45 AM. 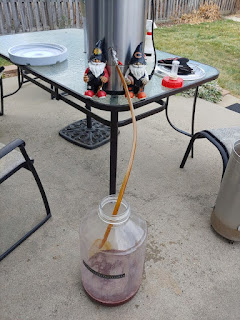 The boil was pretty standard. I got the hops etc added on schedule.
The OG was low by a few points (1.067 vs 1.071). Not enough for me to care about.
The wort was chilled by 8AM, and I racked the wort onto the Cherry Pomegranate juice concentrate.
I pitched the yeast by 8:30, and I was cleaned up before 9:10.
The ferementation was going strong the next day. I expect to be drinking this by Christmas. Of course, I'll let you know how it turns out.
As always stay tuned on the regular SheppyBrew Channels to see what is happening with beer and other things: SheppyBrew's Facebook Page; Sheppy's Twitter Feed; SheppyBrew's Instagram Page; and SheppyBrew's Website.Of course, don't forget to visit this blog often as well!
Posted by ESheppy at 12/07/2021 06:23:00 AM