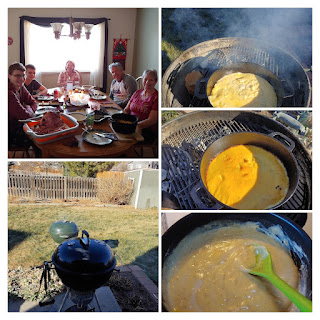 We received a Honey Baked Ham as a gift this year.
My kids had already told me that they wanted Ham for Christmas dinner, and I decided to just heat up the gift ham.
The ham came with various sides, some of which we prepared with Christmas dinner, but my wife told me she wanted "real" Au Gratin Potatoes.
So ... I made some.
As I rarely cook inside, I decided to cook my Au Gratin Potatoes on one of my Weber Kettles with a little Pecan wood to add a little smoke flavor.
As far as I remember, this is the first time I've ever made Au Gratin Potatoes. I googled recipes and decided to use one I found on All Recipes as a starting point. 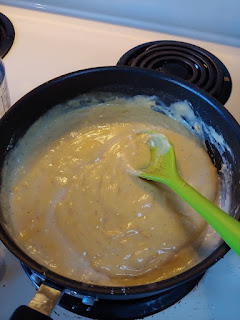 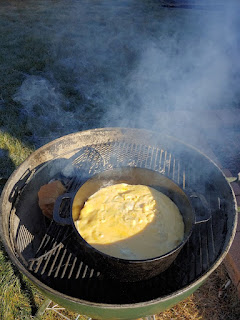 Step 1
Preheat Weber Kettle to 400ish degrees F add in a chunk of Pecan wood. Oil up my cast-iron Dutch oven.
Step 2
Layer 1/2 of the potatoes into bottom of the prepared Dutch oven. Top with the onion slices, and add the remaining potatoes. Season with salt and pepper to taste.
Step 3
In a medium-size saucepan, melt butter over medium heat. Mix in the flour and salt, and stir constantly with a whisk for one minute. Stir in milk. Cook until mixture has thickened. Stir in cheese all at once, and continue stirring until melted, about 30 to 60 seconds. Pour cheese over the potatoes, and cover the dish with the Dutch oven lid.
Step 4
Heat covered for 15 minutes. After 15 minutes, take off lid and cook for 30 to 45 minutes. Then, cover again to finish off the cook ... around 1 1/2 hours total. 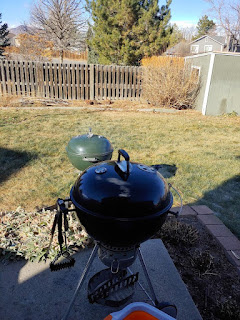 The potatoes turned out great. I really liked the way they turned out on the Kettle / Dutch oven. The Pecan smoke was fairly subtle, so I probably could have left it uncovered longer.
This was by far the best side we had. 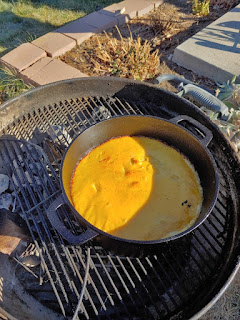 For what it is worth, the ham was also fantastic.
Christmas dinner was a great success. I'm sure I'll be making these potatoes again.

As always stay tuned on the regular SheppyBrew Channels to see what is happening with beer and other things: SheppyBrew's Facebook Page; Sheppy's Twitter Feed; SheppyBrew's Instagram Page; and SheppyBrew's Website.Of course, don't forget to visit this blog often as well!