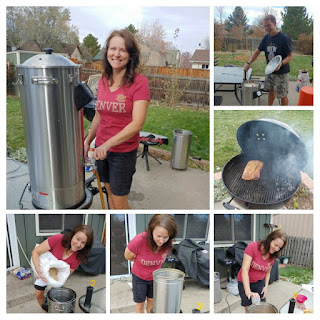 Saturday was the AHA's Learn to Homebrew Day. The SheppyBrew Beer Model and I have made it tradition to brew together on that day every year.
Of course we both know how to homebrew, but Saturday was the first opportunity for the Beer Model to brew with the Anvil Foundry I recently purchased (see Bud Lite Lime (271) on the Anvil Foundry).
There are two main reasons that the idea of electric brewing was extremely attractive to me.
First: most of the electric units I know about allow the ability to set a timer to start heating water. This means you can get your water all ready the night before and have the strike water to temperature when you get up in the morning.
That way, you can start the mash process immediately when you get up.
Both times I've used the Anvil Foundry, I've taken advantage of this feature, although when brewing with the Beer Model, we get started so late, it wasn't as big a deal for me. 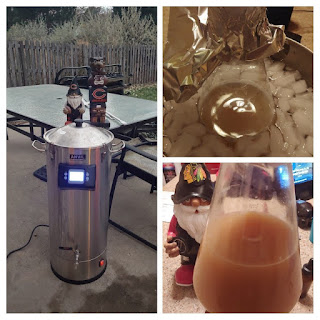 The second big thing that made me seriously consider electric brewing has to do with how windy it can get on my back patio.
There are days when I have to set up wind breaks and/or keep an eye on the burner for fear of the wind blowing out the flame. When this happens, it really pisses me off.
The Anvil Foundry and other electric brewing systems don't have that problem at all.
The first time I brewed with the Foundry, the wind wouldn't have been an issue, but Saturday, it was just windy enough that I was glad to not have to worry about it. 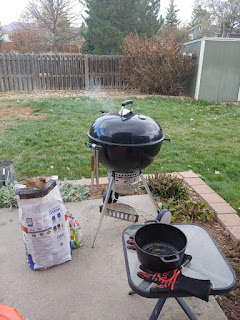 So, Saturday the SheppyBrew Beer Model (aka my wife) and I brewed up our
2020 X-Mas Ale
At the same time, I smoked a chuck roast for the family dinner. 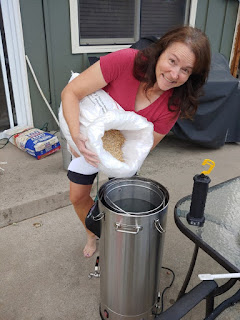 Just over 8 gallons of water was heated to 160 degrees by 6:30 AM, but the Beer Model wasn't really ready to begin until closer to 8:30. No problem, the Foundry kept the water hot for us.
Around 8:30, we turned the temperature down to mashing temperature, and the Beer Model added the grains.
The amount of grains with the 8 gallons of water really maxed out the Foundry. If I go much bigger OG, I'll have to adjust. The X-Mas Ale is on the high side of the beers I tend to make, so I probably won't go too much bigger. 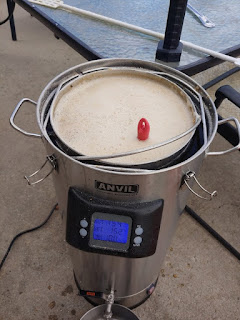 Even so, it is something I'll have to keep in mind.
I've designed my recipes to use my full volume of water in the mash ... brew-in-a-bag style. I don't know for sure, but I feel like I need to stir the mash more with this process than I did the "old" cooler-mash-tun process to get my brew-house efficiency up.
So, I've taken to stirring at least every ten minutes. I think I did it even more on Saturday. 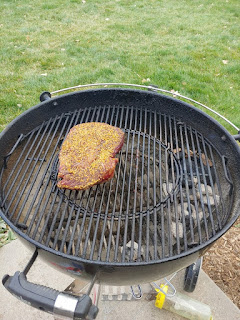 So far, my efficiency really has not been too much lower than my other process, so I'll probably continue this stirring.
Saturday, I tried a sort of step - mash. The plan was to rest at 152 for 30 to 45 minutes and then raise the temperature to 160 for 15 minutes followed by a mash - out at 170 or so.
I've noticed, though, that the temperature at the Foundry's sensor .. the bottom of the vessel can be considerably higher than at the top of the mash. When the Foundry hit 160, my floating thermometer still read just over 154.
The Foundry has an optional Recirculation Pump kit. I chose to not purchase this when I got the Foundry. I think recirculation of the wort would help keep the temperature more uniform. I might end up getting the Recirculation Pump kit. We'll see. 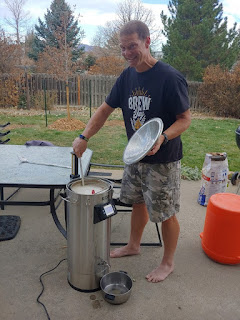 Not really a big deal. Just another thing to keep in mind.
So, I ended up pulling out the grain basket to drain the wort before "mash out" rest.
I tried a modified "vorlauf" by draining into a pot and pouring on the top of the grain bed in the grain basket.
It took a long time for the grain to drain, but gave the foundry time to heat the water to boiling. 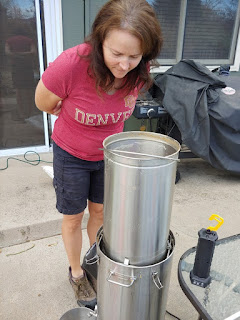 Once the wort reached a boil, we took a pre-boil reading. It was 3 or 4 points lower than planned but we decided to let it ride.
And, then we followed the recipe, adding the boil additions as specified. 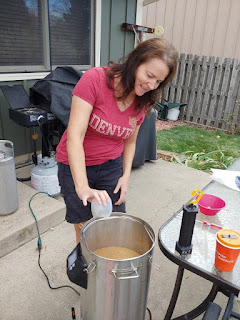 The boil isn't very vigorous with 120 volts, but even with my propane system, I didn't really go with much more than a simmer. 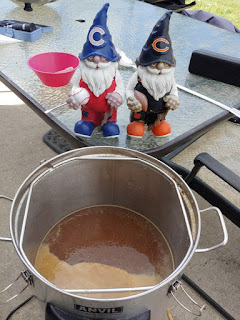 The boil finished and we chilled using the immersion chiller that comes with the Foundry. I got the wort cooled with hose water and then switched to a pond pump circulating ice water.
I was able to get the wort down to 58 degrees fairly quickly. 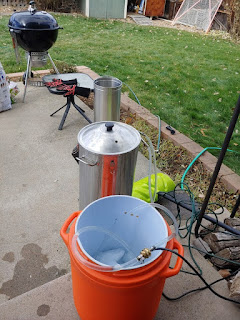 At some point, I moved the chuck roast into a Dutch oven to braise in beef broth. 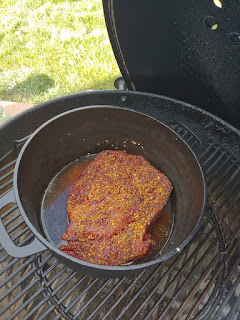 Around noon, we started transferring the wort into the fermentor.
We had the yeast pitched and were mostly cleaned up by 12:30. Basically a 4 hour brew day, which is better than my first try with the Foundry. 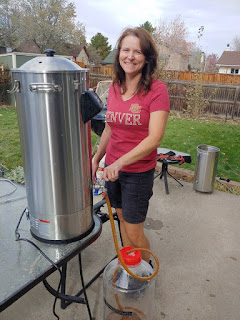 The chuck roast was delicious for dinner.
The yeast took off some time over night.
The next day, I added about 2 ounces of chocolate flavoring to the fermentor.
Once the fermentation is almost done, I'll add the peppermint.
We'll be drinking this sometime between Thanksgiving and Christmas.
As always, stay tuned on the regular SheppyBrew Channels to see what is happening with beer and other things: SheppyBrew's Facebook Page; Sheppy's Twitter Feed; SheppyBrew's Instagram Page; and SheppyBrew's Website.