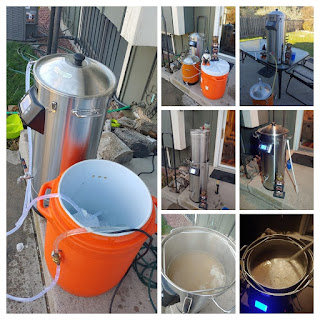 Well ... I got a new toy. A new piece of brewing equipment.
I decided to enter the world of electric brewing with the Anvil Foundry.
If you looked closely at my pictures on Lithuanian Autumn Ale (Batch 270), you might have noticed I actually used it during that brew, but I only used it to heat strike water on that day.
So, what is the Anvil Foundry?
It is one of the many electric "all-in-one brewing systems" that have become popular over the past few years.
According to my friends at The Brew Hut (my local home brew shop) ... the Anvil Foundry is extremely popular, they told me it is their favorite "all-in-one brewing system". It is not as pricey as most of the similar systems, and seems to get great reviews. 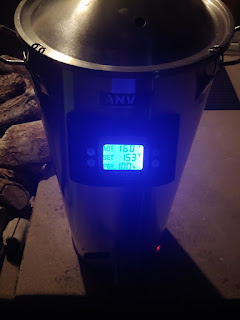 These are called "all-in-one" because you mash and boil in the same vessel. Essentially, this is a big electric kettle with a stainless steel grain basket that fits inside.
The Brew Master adds the water and sets the control to heat to strike temperature. Add the grains to the basket, mash as the recipe specifies. When the mash is over, I simply pull the basket out and let the grain drain.
A brewer can sparge if he/she wants, but I did a full volume mash. 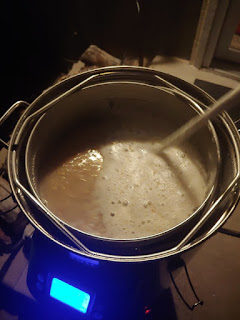 Then, the Brew Master turns up the heat on the unit to get the wort up to boiling temperature and performed the boil just like always, adding ingredients the recipe calls for.
The system comes with a stainless steel immersion wort chiller that fits inside the kettle. 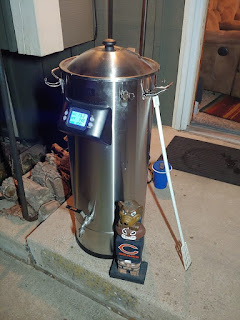 One big reason I went with the Anvil Foundry is that the same unit can be switched fairly easily from 120 volt (1600 watt) to 240 volt (2800 watt).
I figured I try it out at 120 volt and if I decide I need more power, I can convert it to plug into my dryer outlet. 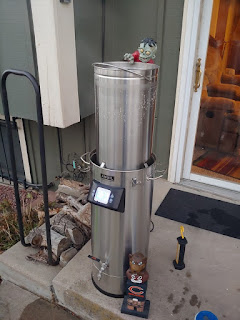 You can get it in 6.5 gallon capacity or 10.5 gallon capacity. I went with the 10.5 gallon version so I would have plenty of room for my preferred batch sizes.
This past Sunday, I used my Anvil Foundry for the first time to brew.
Bud Lite Lime
I won't go into why I call it Bud Lite Lime here, but no limes were harmed in the creation of this beer. You can read the recipe page if you're interested in the name.
It is actually a light colored "Mexican" lager with a significant amount of Saaz hops in the finish. 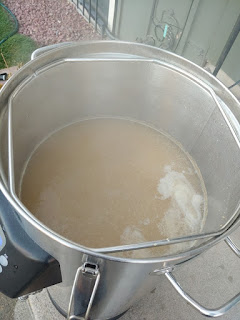 The brew day went well. One of the cool functions of these all-in-one electric brewing systems is that it allows me to fill the kettle with water the night before, and set a timer to bring the water to strike temperature while sleeping.
I did this, and was able to get to mashing almost immediately after waking up. 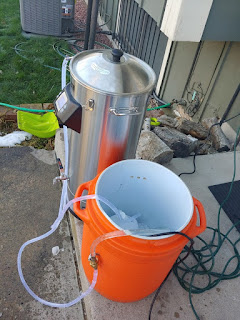 I used a BIAB mash profile in Beer Smith, which calls for a 90 minute mash followed by a 10 minute mash-out.
Every ten minutes or so, I stirred the mash.
I think 90 minutes is longer than was needed. With the 120 volts, heating to mash-out took quite awhile, and I ended up not resting at a temperature, simply letting the water heat up to boiling temperature.
I planned for a slightly lower brew house efficiency, but as it turned out, my pre-boil volume and gravity were higher than expected and I diluted the wort. I think I can go to the same brew house efficiency I use in my "regular" batches.
It was almost two hours between mash in and starting the boil. I need to tweak the process to get to boil faster. I'm also really strongly considering making an extension cord to allow me to plug into my dryer outlet so I can use the system at 240 volts. 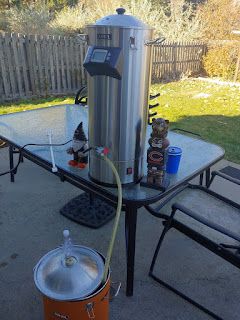 We'll see how it goes on future brew days.
The boil itself was not very vigorous, but even with a propane burner, my boils were not much more than simmers anyway, so it wasn't all that different than I was used to.
The boil went fine.
My Jaded Hydra doesn't fit in the Foundry, so I used the chiller than came with the system. Chilling took longer, but that is ok. I wish I would have been forward-thinking enough to consider a different chiller when I bought the Hydra, but I won't worry about that too much. 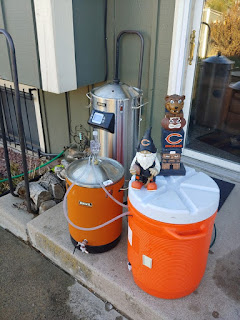 I ended up racking to the fermentor in the 70's and used my Cooling System to get to lager pitching temperature.
The brew day took a little longer than it does with my "regular" process, but not too bad. I didn't record my actual start time, but I think I was cleaned up in 5 or 5.5 hours.
As I mentioned, I'll be tweaking the process to see how I can reduce the total time of brew days with the  Anvil Foundry.
As I type this, the beer is fermenting away in my Anvil Brew Bucket with the cooling system keeping it at lager temperatures.
I'll be drinking this in a couple of weeks.
As always, stay tuned on the regular SheppyBrew Channels to see what is happening with beer and other things: SheppyBrew's Facebook Page; Sheppy's Twitter Feed; SheppyBrew's Instagram Page; and SheppyBrew's Website.