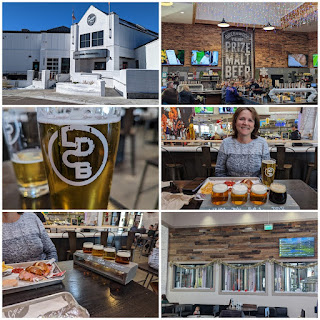 It is amazing to think that the Beer Model and I are already on "L" for this round of our little  A to Z Denver Breweries project.
The wife keeps forcing me out to the breweries.
We posted A is for A Bit Twisted Brewpub in June ... only 5 months ago.
K is for Knuckle Puck Brewery Kombucha & Beer appeared about a week ago.
If my quick math is correct, that's over 2 new breweries visited per month. Crazy!
Regardless, the letter L comes after the letter K, so we needed an "L" brewery.
There are actually a ton of breweries that start with the letter "L" in our area. 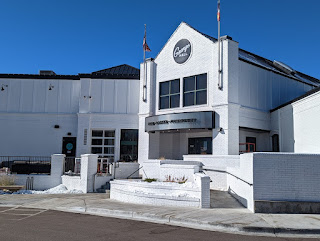 So we had a lot to choose from.
The Beer Model posted a picture on Facebook after K is for Knuckle Puck and mentioned she had a brewery in mind.
Some of her friends guessed things like Locavore, Lady Justice, Little Machine, Living the Dream.
No one guessed the brewery she had in mind ...
L is for Little Dry Creek Brewery 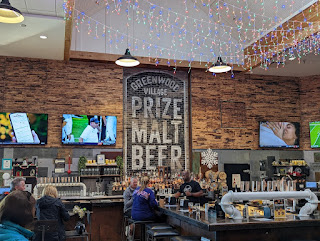 Honestly, if I were to be the one to pick, this would have been the one, but I didn't know this was the one she was thinking of until Saturday morning.
I found out shortly before her adoring fans did.
Little Dry Creek Brewery is located inside "Grange Food Hall", which is a cool little Food Court area in Greenwood Village, walking distance from where I used to work.
6575 Greenwood Plaza Blvd., Greenwood Village, CO 80111
I've actually spent quite a bit of time inside this building back when it was C.B. & Potts. It is much better now. 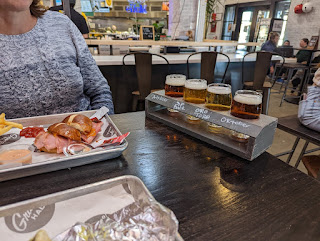 We picked up food from one of the stations, then found a table sort of close to the bar. We ordered a flight online and the bar tender brought us the beers.
Technology is cool. When we were ready for our second flight, I just added the order to my phone and it appeared.
When it was time to close out, I just checked out on the phone too. 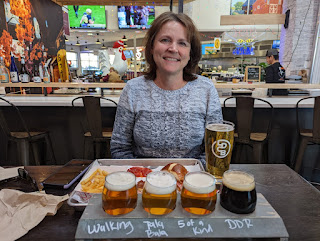 Never had to talk to the bar tender other than thanking him for bringing us beers. Perfect.
The beers were all good. The Beer Model's favorite was Oro Toro Mexican Kolsch. Mine was Bar Sixteen Pilsner.
They had a nice variety of beers. You can check out everything they have on their website. 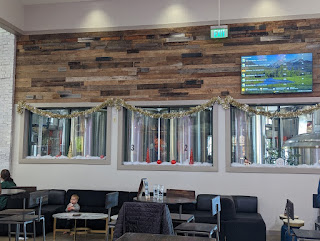 The food was good. The beer was good. The atmosphere was good. I bet they get pretty busy on weekdays around lunch time and happy hour with all the businesses in the area.
Really a nice spot to eat, drink, and socialize.
I'm glad this is what we picked for our "L" brewery. 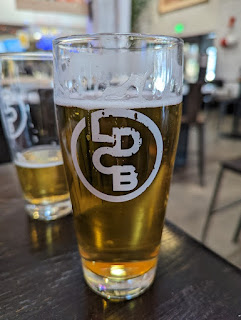 And ... now, we need visit an "M" brewery. According to the Colorado Brewery Map & List, "M" is a pretty popular letter for brewery names. Most of them are quite a distance from us, but there is at least one good choice for our next brewery visit.
Keep an eye on  Sheppy's Blog: A to Z to see what we end up going to.
And ... as always stay tuned on the regular SheppyBrew Channels to see what is happening with biking, brewing, barbequing, and other things: SheppyBrew's Facebook Page; Sheppy's Twitter Feed; SheppyBrew's Instagram Page; and SheppyBrew's Website.Of course, don't forget to visit this blog often as well!
Posted by ESheppy at 11/21/2022 06:34:00 AM