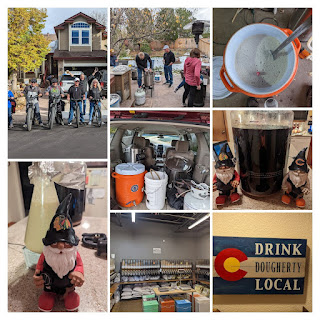 This past Saturday was the AHA's Learn to Homebrew day.
You might remember this from previous years, but my homebrewing friends "Doc" and "Du" and I try to get together a few times a year to brew together.
Learn to Homebrew Day and Big Brew Day are always great excuses to get together.
The AHA always posts a recipe for these national brewing days. The one they posted for Saturday was LTHD22 Hoppy Amber Ale.
While I don't ever actually use the AHA's recipes, their Hoppy Amber Ale, inspired me to come up with a recipe for a Hoppy Red Ale (aka Red IPA).
Back in the day, I was a great fan of this style. Remember such classic beers as Quarter Life Crisis and Pompously Illegitimate Red Ale. 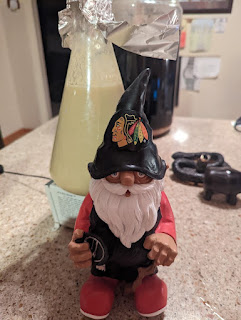 I had some harvested Voss Kveik yeast at some point. (probably from when I brewed the Double Batch of N.T.S.). Kveik yeast is great for these Travel Brew Days, because it means I don't have to chill the wort down quite as much.
I also have a bunch of Talus hops I used in the recipe.
The recipe I ended up with I simply called ...
Dudocs Red IPA 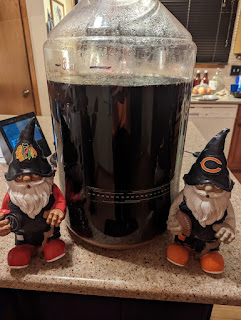 "Doc" wanted to host at his house. That worked fine for me and Du. Doc doesn't like to get started brewing as early as Du or I, so the Beer Model and I didn't head over until around 11:00AM.
I didn't have a free fermentor, so I had to keg Will-o-Wisp in the morning before heading over.
I also made my starter of the harvested Voss yeast before heading over. 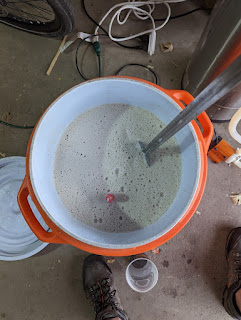 And ... as I usally do on the Travel Brew Days, I started the mash at home to take advantage of travel time.
The brew days away from home end up being more difficult to pay attention to things, so as much prep I can do before hand the better.
Anyway ... the Beer Model, and I arrvied at Doc's Brewery a little after 11AM. 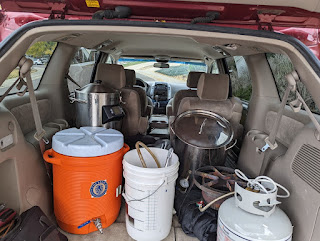 After the obligatory "tour" for Doc to show us the beers he had on tap, I drained my mash tun into my Anvil Foundry, and I started brewing.
Both Doc and Du did extract beers. Since mine was all-grain and I was using the Foundry, I was behind them both. 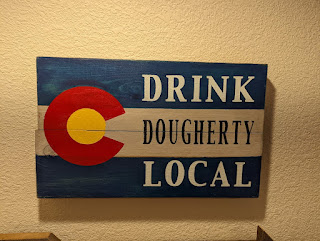 But, my boil was shorter than the typical hour brew. I actually caught up with Doc's brew day. 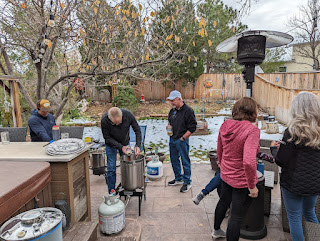 The non-brewers Doc and his wife had invited all had eBikes they brought. The Beer Model brought hers too.
So ... they all took off to visit local breweries on their eBikes.
It looked sort of fun. Too bad I don't own an eBike and wasn't invited to that part. Actually, it was fine. It gave me the opportunity to clean up and pack up to head home. 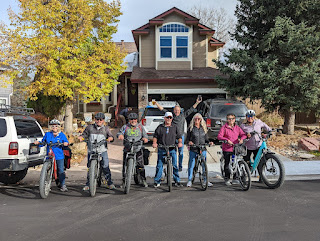 One of the riders got a flat tire. Doc and I went to rescue her and her husband.
And then, we ended up meeting the rest of the group at their second brewery. We didn't end up home until much later than we expected, but it was all good.
My Dudocs Red Ale was bubbling hard the next day and I had to put in a blow-off tube.
The aroma coming off the fermentor smelled awesomely hoppy.
I did more clean up the next day. I also head out for a mountain bike ride. 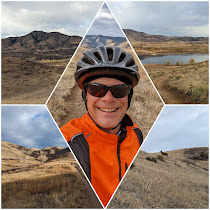 Another great Learn to Homebrew Day.
The beer will probably be ready to keg by this coming weekend. I'm not sure I'll actually have a keg to put it in yet, but we'll see.
Anyway ...
As always stay tuned on the regular SheppyBrew Channels to see what is happening with biking, brewing, barbequing, and other things: SheppyBrew's Facebook Page; Sheppy's Twitter Feed; SheppyBrew's Instagram Page; and SheppyBrew's Website.Of course, don't forget to visit this blog often as well!
Go Blackhawks!
Posted by ESheppy at 11/07/2022 06:02:00 AM