I don't know if I "said it out loud" on this blog, but I've been wanting to compare my Mr. Awesome Merican Lager to my Jethro Bud Nelson Merican Lite Lager.

They were certainly designed to be different, but I was curious to see how much. 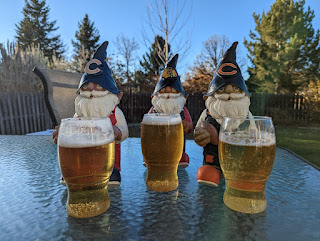 A few weeks ago, I thought the latest batch of Mr. Awesome was close to being ready, so I poured myself glasses of Mr. Awesome and Jethro Bud Nelson along with one of a commercial craft light lager "Outlaw" by Tivoli Brewing Company.

The beers were visually pretty close, but the Jethro Bud were just a shade lighter in color and were both clearer. 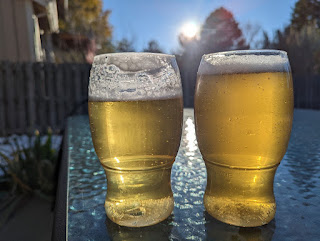 Mr. Awesome had more hop character and maybe just a little more malt richness as well. I actually thought both of my beers were cleaner in the yeast / fermentation character than the commercial beer.

None of that is a surprise. If I were to describe differences based on how I designed the beers, I would said the exact same things.

Good to know, the beers turned out as designed. 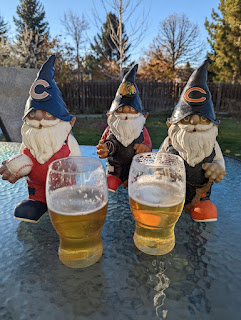 A couple weeks later, I got my beers out again. Mr. Awesome has cleared up considerably, but still is not quite as crystal clear as Jethro Bud.

Just for the fun of it, I did a little triangle test between Jethro Bud and Outlaw. I easily picked the odd-beer out based on the cleaner yeast character of the homebrew (which is sort of interesting). 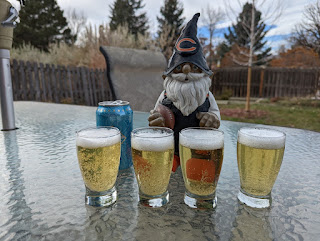 I was still able to fairly easily pick out the odd beer, but I think it was a little closer than the Jethro Bud / Outlaw comparison.

I am really pleased with how close clarity is on both these beers compared to the commercial samples. 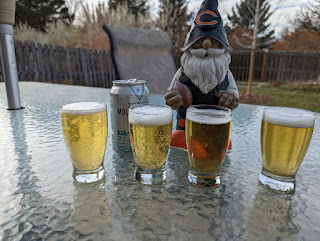 I didn't actually do a triangle test between Mr. Awesome and Jethro Bud, but I am pretty confident that I'd be able to pick out the difference between these two.

Nothing earth shattering or even surprising ... but it is nice to know these beers meet my expectations when compared side-by-side.

I think my keg of Jethro Bud Nelson Merican Lite Lager is almost gone. I need the keg for beers I've brewed recently, so that is good.

As always stay tuned on the regular SheppyBrew Channels to see what is happening with biking, brewing, barbequing, and other things: SheppyBrew's Facebook Page; Sheppy's Twitter Feed; SheppyBrew's Instagram Page; and SheppyBrew's Website.Of course, don't forget to visit this blog often as well!
Go Blackhawks!
Posted by ESheppy at 11/18/2022 06:18:00 AM