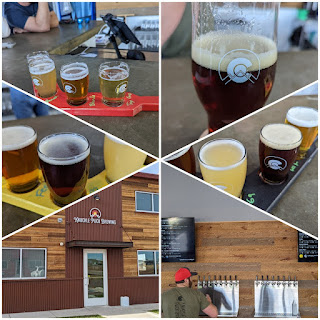 If you've been following my A to Z Denver Breweries series of posts, you know that I recently posted J is for Jade Mountain Brewery and Teahouse.
That means, of course, that we had to find a "K" brewery next for our 4th round.
In round 1, we visited K is for Kokopelli Beer Company.
In round 2, we visited K is for Kitchen, Lowdown Brewery +.
In round 3, K is for Kettle, Copper Brewing Company.
According to the Colorado Brewery Map & List, we had a couple choices for round 4, but nothing particularly close. So we had to travel a bit for ...
K is for Knuckle Puck Brewery Kombucha & Beer 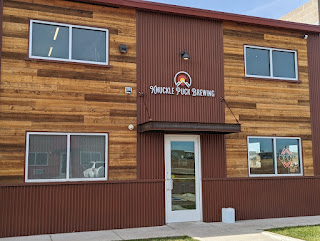 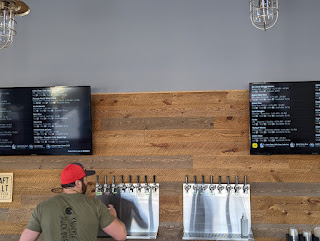 I don't really know of any other craft kombucha "breweries" (I'm not even sure what you call a place that produces kombucha .. I'm sure there is a cool official name ... I just don't know what it is).
But ... we didn't go there for the kombucha ... we had ... flights of beer. 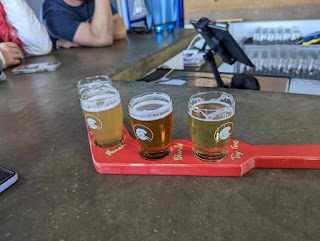 The flights are cool boards shaped like hockey sticks. Homemade by the owner. Really cool.
Apparently the owner and his wife are fans of the Mighty Ducks series of movies. I didn't get the "Knuckle Puck" reference until I got there and saw Mighty Duck jerseys on the wall, and even then I didn't quite get it until I noticed they had a beer named "Flying V". 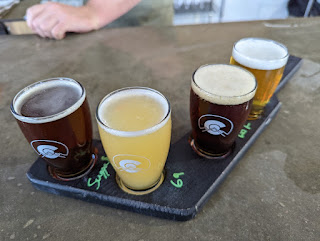 I really liked all the beers. I wasn't quite as wild about their hazy IPA's, but that is more me than their fault.
The bartender was really cool and we had a good time talking to him.
They have a little food menu with hotdogs, brats, and pizza. The Beer Model and I had brats. The brats were nothing special, but satisfied our lunch hunger. 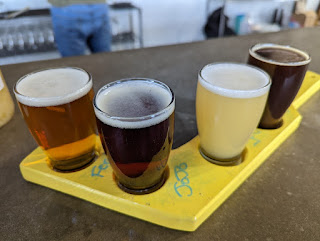 I really like this little place. It is too far from us for me to think we'll ever be back, but if we lived in the area, I am sure we would visit often. 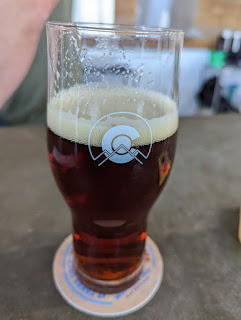 Stop by if you are in the Mead, Colorado area.
Now, we need visit an "L" brewery. the Colorado Brewery Map & List has quite a few choices. The Beer Model  posted on Facebook that she has an "L" brewery in mind. I'm not sure what it is ... but she rules the home, so chances are strong we'll go with what she wants.
Keep an eye on  Sheppy's Blog: A to Z to see what we end up going to. I'm sure you'll be just as surprised as me.
And ... as always stay tuned on the regular SheppyBrew Channels to see what is happening with biking, brewing, barbequing, and other things: SheppyBrew's Facebook Page; Sheppy's Twitter Feed; SheppyBrew's Instagram Page; and SheppyBrew's Website.Of course, don't forget to visit this blog often as well!
Go Blackhawks!
Posted by ESheppy at 11/15/2022 05:39:00 AM