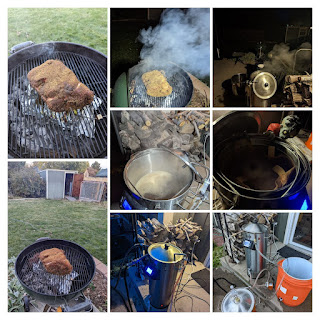 I brewed my 7th lager of the year last Sunday.
My 19th batch of beer this year (20th if you count the double bath of McShepardSons Irish Ale as two batches).
Officially, it was the 323rd batch of beer I brewed since I started way back in 2009.
If you've been following along on this blog for the last year or so ... you might have noticed my infatuation with the Vienna Malt from Root Shoot Malting.
Root Shoot is a Colorado malting company, so I've tried to use it quite a bit for the various Colorado Strong beers I've brewed.
The Root Shoot Vienna Malt is darker in color and (in my humble opinion) more rich in flavor than other Vienna Malts.
I feel like it is pretty unique and I use it quite a bit in beers whenever I get my malts from the Brew Hut. 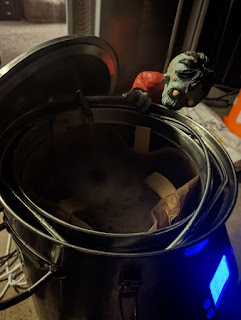 For quite awhile, I've thought to myself that I'd like to brew a "Vienna Lager" with 100% Root Shoot Vienna Malt.
Recently, I designed a recipe that did this. This was the beer I brewed Sunday.
Wien Zerschlagen (Vienna SMASH) I took way too long trying to come up with a cool name for this beer.
Not sure I actually got to "cool", but "Wien Zerschlagen" translates to "Vienna Smashed" when I put it in the google translator.
Since the beer recipe has a Single MAlt and a Single Hop, it is indeed a "S.M.A.S.H." beer.
I probably would have named it "Colorado Vienna" if I had not already used that name for another beer recipe. 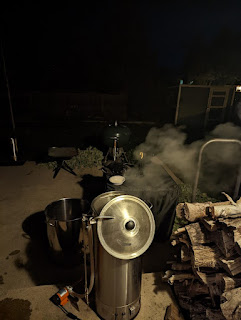 Anyway ... Wien Zerschlagen is what the beer is called. We'll see how much I like it. If I brew it again, maybe I'll come up with a cooler name.
Like usual, I started the "brew day" the night before by preparing the water and setting the Anvil Foundry to start heating overnight while I was sleeping so that when I got up, I didn't have to heat the water up.
I love my Anvil Foundry for that. 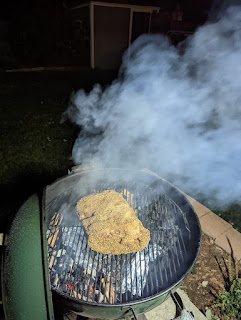 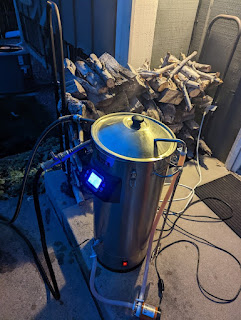 Most of the brewing was done before the sun came up.
The beer's OG ended up right in line with the plan. Awesome. 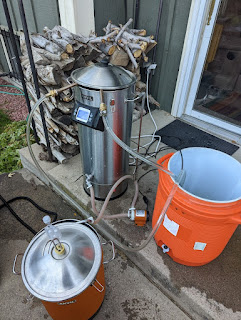 It has been fermenting this week. I started at "lager temperatures", but I forgot to change out the ice bottles in the cooling system I have on Wednesday, so it is already at ambient temperature.
I've found that this is fine. 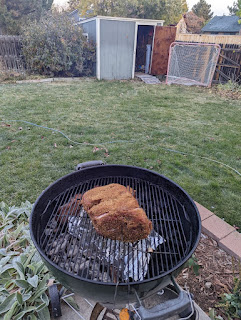 The Pork turned out awesome as always.
I'll have to let you know how I like the Wien Zerschlagen turns out. I'm pretty sure I'll love it. 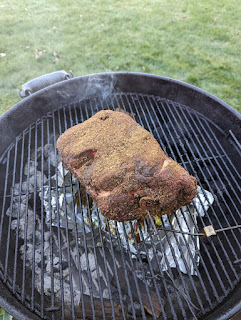 As always stay tuned on the regular SheppyBrew Channels to see what is happening with biking, brewing, barbequing, and other things: SheppyBrew's Facebook Page; Sheppy's Twitter Feed; SheppyBrew's Instagram Page; and SheppyBrew's Website.Of course, don't forget to visit this blog often as well!
Go Blackhawks!
Posted by ESheppy at 11/04/2022 05:41:00 PM