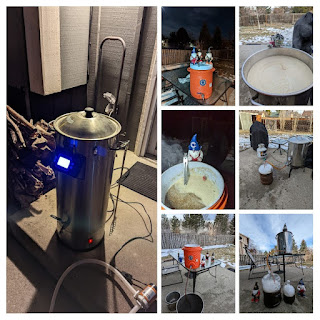 As I mentioned last week in Disappearing Beer, my Beer Inventory is very low right now.
I have a keg of Boo Berry American Wheat, and a little bit of beer in my keg of Colorado Strong IPA.
Boo Berry is mostly for my wife (aka the SheppyBrew Beer Model), and Colorado Strong will blow any time now.
So, if I want homebrew to drink in the near future, I had to brew this past weekend.
To help catch up quickly, I decided to do a 10 gallon batch.
I also decided to go with a low-ish ABV beer to help ferment faster.
Since I was doing a double batch anyway, I decided that one of the fermentors would use Kveik yeast in hopes to speed up fermentation.
As St. Patrick's Day recently occurred ... I thought I'd brew an Irish Red ... sort of a belated seasonal.
McShepardSons Irish Ale (double batch) 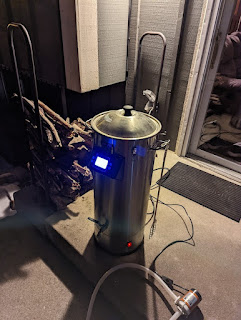 My Anvil Foundry can't handle a 10 gallon batch, so I got out my old-school mash tun cooler and my propane burner.
I did use the Foundry's timer to get the mash strike water up to temperature while I was sleeping so that I could get started early on Sunday. 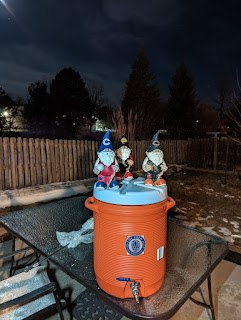 I actually mis-read my mash thermometer and thought I had overshot my mash temperature and I spent some time cooling and then re-heating the mash.
I was looking at the "C" side when I should have been looking at the "F" side.
Oh well ... it won't be that big a deal. I probably ended up with a more fermentable wort than I intending but that is fine. Generally, I like better attenuated beers anyway. 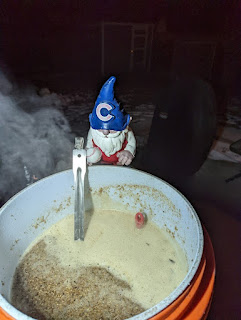 The mash and sparge went well. I ended up with better conversion than I had planned for, and there was not a whole lot of room in the kettle, so I ended up cutting my boil by 15 minutes.
The propane burner got the wort to boiling so much quicker than the Foundry. This is the main thing I miss about the old-school brewing. 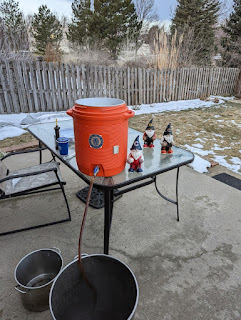 The boil went well.
Even with the reduced boil time, I ended up with an OG a bit higher than I originally intended. This will result in a bit higher ABV than planned, but again that is fine with me. 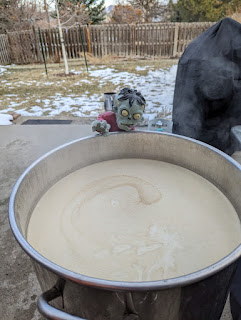 I chilled to the 70's and drained into the Kveik fermentor while the chiller was still working.
I was a little surprised how well that worked. As you can see from the picture below, the kettle was not much higher than the ground on the burner. This is something to keep in mind for double batches in the future. 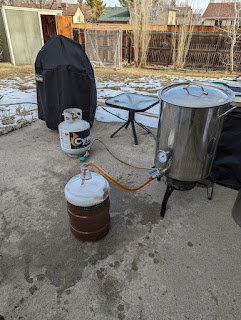 Then, I racked into the other fermentor.
I was up around 5:30, and had wort racked by 9:30. I was basically cleaned up by 10. So .. a 4.5 brew day for a 10 gallon batch.
Not bad.
The Kveik yeast wasn't at the real high temperatures that I generally shoot for in the summer, so it didn't start as fast as it does at higher temperatures. It still started significantly faster than the English yeast.
Both fermenators were going strong the next morning. 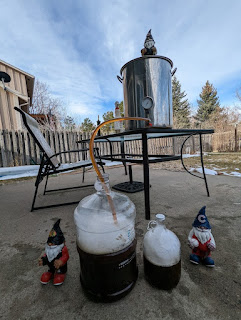 I'm expecting to keg the Kveik batch by the coming weekend. I will probably keg the English Ale batch by the following weekend.
I'm looking forward to comparing and contrasting the two beers. If you are too ... keep an eye on Sheppy's Blog: McShepardSons and you'll see what my notes are.
As always ... don't forget to stay tuned on the regular SheppyBrew Channels to see what is happening with beer and other things: SheppyBrew's Facebook Page; Sheppy's Twitter Feed; SheppyBrew's Instagram Page; and SheppyBrew's Website.Of course, don't forget to visit this blog often as well!