While out for a walk earlier in the week, I was thinking about homebrewing (surprise surprise).

One of the things that popped into my mind was beers that I always brew about the same time of year.

I was wondering if I had seasonal beers for every month of the year.

An obvious example is my Seasonal Saison series of beers. January is almost always when I brew Arctic Vortex Winter Saison. I usually brew Melting Stream Spring Saison in March or April, Hail Storm Summer Saison in June or July, and Falling Leaves Autumn Saison in September or October.

May is easy. The tag line for Helles in a Hand Bock-sket is "Will Drink in May".

Will-o'-Wisp Pumpkin Ale makes the most sense for October.

Decemberfest Lager has "December" right in the name.

X-Mas Ales would also make sense for December, but since December is already taken, I will throw that into November.

The other obvious seasonal that I thought of was "Mardi Bock", which is supposed to be ready by the beginning of Lent. This is usually February or March. 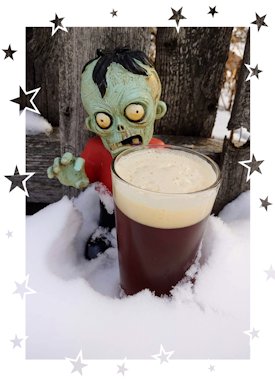 I could throw Rocktoberfest Lager in there, but it would have to be September or October, and those months are already taken.

Summer Lovin' American Wheat gets brewed a lot, but not really at a consistent time of year. Since I need a beer for June and August and they are both summer months, I'll throw it into June.

For summer, that leaves August, which is a really hot month. I thought a beer brewed with Kveik yeast would be good for such a hot month. I've only brewed N.T.S. Faux Pilsner once, but I can certainly brew it again.

I don't have anything for March, but since St. Patrick's day is in the exact middle of the month, it seems like some sort of Irish Ale recipe would nicely fit there. I have a to-do to make an Irish Ale recipe to start brewing for the holiday.

Who cares? No one really.
It was an interesting mental exercise for me. I certainly won't brew all these seasonals every year. I just thought it was a fun thing to think about.

I hardly ever get accused of being normal.

stay tuned on the regular SheppyBrew Channels to see what is happening with beer and other things: SheppyBrew's Facebook Page; Sheppy's Twitter Feed; SheppyBrew's Instagram Page; and SheppyBrew's Website.Of course, don't forget to visit this blog often as well!