T is for Tivoli Brewing Company 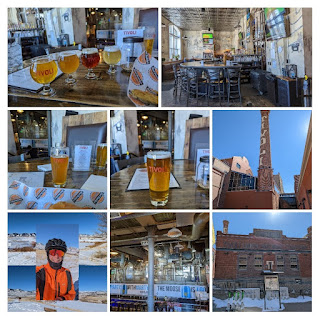 When I posted S is for Smash Face Brewing, it had been almost 2 and a half months since I had added to my A to Z Denver Breweries series of blog posts.
Now ... about a week later, here I am already adding another one.
On Saturday, my wife (aka The SheppyBrew Beer Model) picked a "T" brewery for us to visit.
This particular brewery actually opened in 1859.
They had to "pivot" when prohibition hit, producing low ABV cereal beers to survive.
In 1933 when prohibit ended, they started up again brewing full strength beers.
By 1950, the brewery was making over 150,000 barrels a year, making it one of the biggest breweries in the Country.
Unfortunately, in 1965, record floods in Denver severely impacted this brewery and forced it to close its doors.
In 2012 ... the brewery was brought back to life in the same building with new state of the art equipment ...
T is for Tivoli Brewing Company 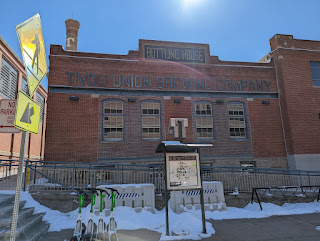 So Tivoli Brewing Company has a pretty rich history. None of the other breweries I've shared on my A to Z Denver Breweries series have existed before this century.
It is located in the "Tivoli Building", which is part of the campus of  University of Colorado - Denver and actually also serves Metropolitan State University of Denver and the Community College of Denver.
It is a pretty cool location. at 900 Auraria Parkway Suite 240 Denver, CO 80204. 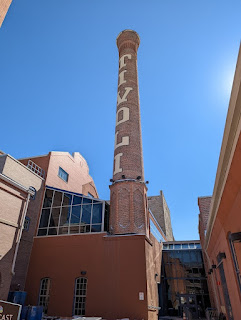 The Tap House makes and serves food from "Bad Daddy's". I'm not 100% how the partnership works, but it is a good one.
Obviously, the fact that it serves food is one of the reasons that the Beer Model picked this for our "T" brewery. 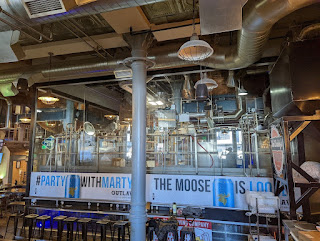 We started out by ordering some fried pickles and a couple of pints. I had the "Helles Lager", which is sort of the beer I consider the "original" Tivoli beer. I believe that for quite awhile after they re-opened in 2012, this was the only beer they made.
The Beer Model got a Bo Girl Pilsner. 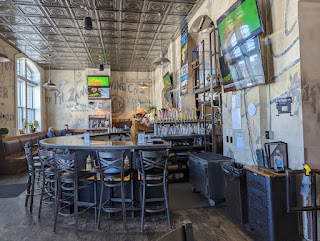 Sort of backwards of our SOP ... after the pints, we ordered a flight of the four remaining "year round" beers on the menu. 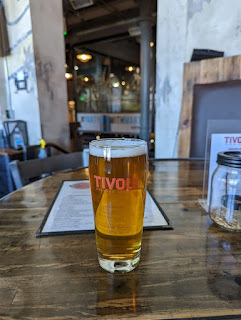 There was a juicy IPA (of course). There was a Hefeweizen.  An American Red. And a "Rice Ale".
I also had another pint of a "Hazy IPA", but not as ugly looking as many NEIPA's.
All the beer was good. None of it really jumped out at us as great or horrible. 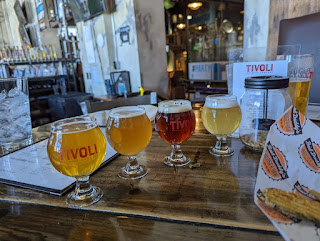 Just good solid beer and food.
A great place to visit for lunch or dinner. I would expect that the various college students of this campus spend a lot of time here. 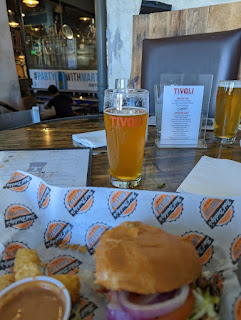 One thing I saw on the website is the ability to "Book a Tour". At some point I think I'd like to do this. I think it would be fun to learn more about the history and see their brewing system.
Maybe, if I do the tour ... you'll see something on this blog. 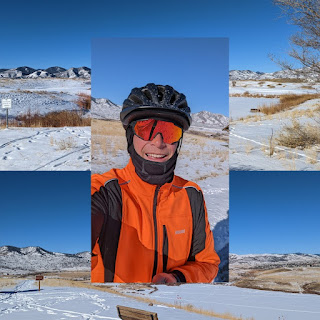 And ... so we've gotten to "T" on our third round of the "A to Z" Denver Breweries posts.
As you may be able to speculate ... next up is "U". The Beer Model told me I have to be in charge of picking our "U" brewery .. which probably means that there are not very many choices in the Denver area.
If you're interested in finding out what I pick ... stay tuned on Sheppy's Blog: A to Z and eventually you'll find out.
Go Blackhawks!
Posted by ESheppy at 2/27/2022 04:33:00 PM