S is for Smash Face Brewing 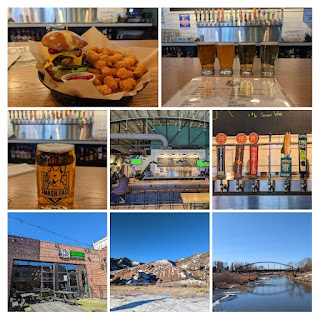 Its been over 2 months since I posted R is for Raices Brewing Company.
For various reasons, the Beer Model and I just have not been going out a whole lot recently.
A side effect of that is that we have not done anything with our A to Z Denver Breweries series of blog posts.
As a reminder ...
Back in February of 2015, I was embarrassed by the huge number of Denver Breweries that I had never visited.
It struck me that if I went down the list, the starting letters of the brewery names represented almost every letter of the alphabet. That was when I started my A to Z Denver Breweries Project on this blog.
We are on our third round through the alphabet.
So ... after R, next up was S. We had a ton of S breweries to choose from. The Beer Model picked one Saturday ...
S is for Smash Face Brewing 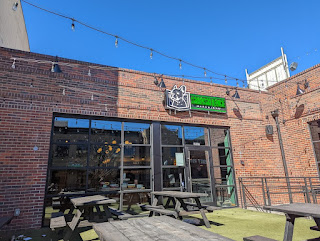 The brewery is named for "Phil", the Boston Terrier "owner" of the brewery.
From the website:

"Not just any canine owned brewery - Phil, the Boston Terrier takes his job very seriously and as a bonus he’s pretty darn handsome. Opening in Summer of 2021, Phil is bringing you the location in Lodo, Denver that you’ll never want to leave. This is a brewery that gives back. Say what now? A portion of every beer Phil sells will be earmarked (see what we did there?) for various local animal charities. Pretty cool, right? Phil hopes you will come and hang out with him and his pals and get your bark and bite on. Let’s raise a glass and wag a tail" 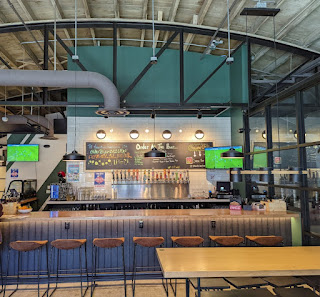 The brewery is located in LODO at 1937 Market Street Denver, CO 80202. ... just a couple blocks from the main entrance of Coors Field.
They serve food, which is part of the reason The Beer Model picked them for our "S" brewery.
Because they have a full kitchen, they are allowed "guest" beers on tap. When we went, they only had 4 of their own beers on tap, and about a dozen other beers. 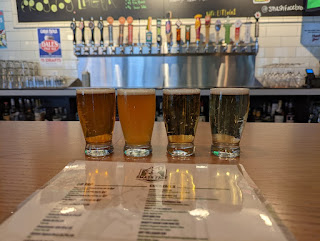 We got a flight of the Smash Face beers. 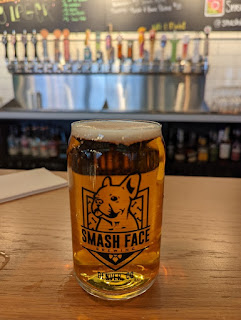 We ordered lunch as well. I ordered a "Smash" Burger and the wife ordered a chicken sandwich. We had a couple pints along with lunch.
The food was really good. It was a bit much for a lunch. 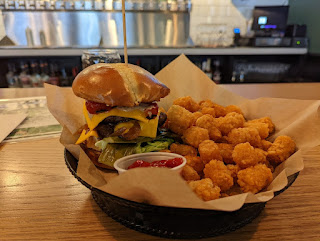 So ... I'm a fan of the Smash Face brewery. I guess in my mind it is more like a sports bar / restaurant than a brewery. The beer selection has a pretty high percentage of craft breweries that AV-InBev bought over the past few years. I don't really care, but I know some craft beer fans would not like the pseudo- craft beers being sold here.
Regardless, the food and beer is really good and the atmosphere / location is really nice.
I'm sure they are packed during baseball season. The food and beer is well worth a visit. 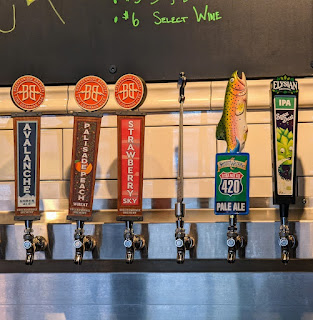 Stop by if you find yourself in LODO and are hungry.
Their hours are Monday - Friday: 3pm to 12am. They are open 11am to 12am on Saturday and Sunday.
So, now that we've visited Smash Face, we need to find a "T" brewery. I'm not sure when we'll get to it.
The Colorado Brewery List has a bunch of breweries starting with "T". A bunch of those start with the word "The", so we probably won't pick those.