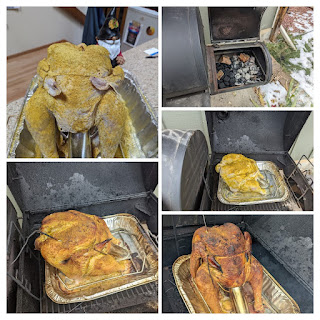 Since 2018, it has been my job to make the Thanksgiving turkeys.
I smoke them outside, which is delicious and also frees up the oven to help the wife planning various sides.
Plus, it's fun for me to do.
Win. Win. Win.
This year, of course, I did it again. My wife got me one of the supermarket frozen turkeys that are always on sale, and I started thawing it out the weekend before Thanksgiving.
Wednesday, I unwrapped the bird and put it in a beer brine made with salt, pepper, brown sugar, and my some extra Dudoc's Red IPA that I had in a growler. 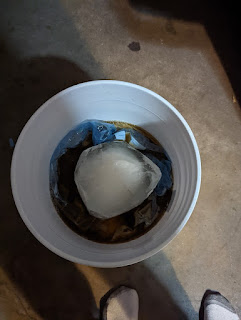 Thursday morning, I pulled the turkey out and placed it on the same Turkey Canon Roaster I use most years.
I applied lemon pepper as a rub. Sometime between 8 and 9 I got coals ready with cherry wood chunks for smoking flavor. The turkey was on the grill just a little before 9am. 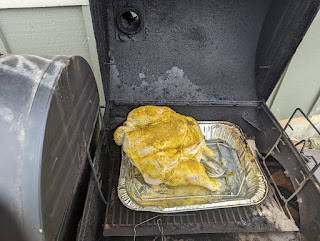 I let the bird cook for the morning. At some point, I decided that the bird would be cooked significantly before the time we wanted to eat, so I reduced the heat for more of a slow cook. 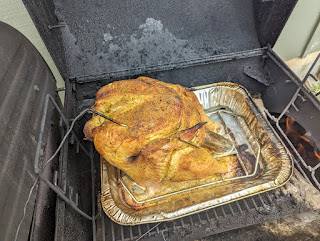 A little before noon, I added enough lit charcoal to get the temperature back up. It took a little longer for the temperature to rise than I thought it would. I don't use this offset very much, so I'm not as practiced at using it as I should be for such an important meal 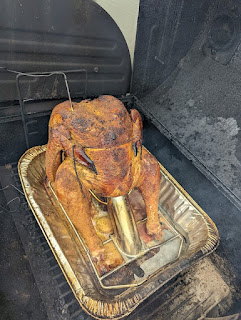 But, around 12:30, the temperature probe started beeping letting me know that the Turkey was ready. We were having Thanksgiving dinner a little before 1pm, which is always our target time to eat.
As always it turned out nicely, and my wife and boys did a great job on all the sides.
I had some of my Dudoc's Red IPA with the meal, and that was yummy too. 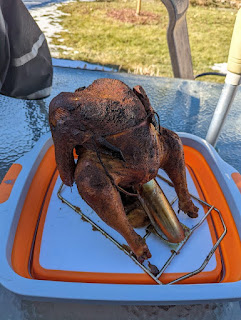 I don't like that I had to delay the cooking by reducing the heat, but it turned out fine. I think next year I'm going to try to figure out how to make the turkey on my 26inch weber kettle, which will give me more control.
I'd have more confidence starting cooking a little later if I were on the kettle.
But, I may have to practice on the kettle to know how what to expect.
Anyway ... that is something for me to think about sometime before next year. If you look at Sheppy's Blog: Turkey shortly after Thanksgiving next year, you'll know what I did.
As always keep watching the regular SheppyBrew Channels to see what is happening with my BBQ, Beer, Biking: SheppyBrew's Facebook Page; Sheppy's Twitter Feed; SheppyBrew's Instagram Page; and SheppyBrew's Website.Of course, don't forget to visit this blog often as well!
Go Blackhawks!
Posted by ESheppy at 11/27/2022 09:28:00 AM