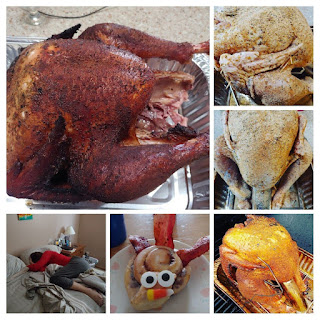 Well ... as you know if you've been following this blog, I've taken up barbecue as a hobby.

My wife bought me a smoker as a gift last Christmas, and I've been using it pretty regularly.

One of the things I've really been looking forward to doing is smoking a Thanksgiving Turkey.

If you follow the SheppyBrew Instagram Feed or Facebook Page, you probably know that I did make our family's Thanksgiving Turkey this year on the Smoker.

If I'm honest, I was a bit nervous about doing it. I've never really smoked anything that big, and I certainly didn't want to screw it up.

I've done quite a few whole chickens, though, and a turkey is basically just a big chicken ... right?


A few weeks before Thanksgiving, I purchased a "Turkey Cannon Infusion roaster" from Amazon to help out. I think of it sort of like a fancy beer-can chicken stand ... only bigger. Not sure if it helped or not, but it gave me a little piece of mind. 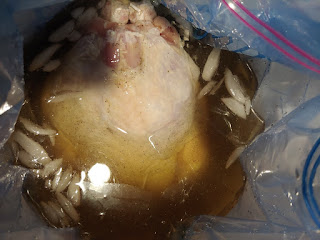 We bought a 14 pound turkey this year from our local grocery store. We went with the cheap frozen 49 cents a pound store brand bird. 14 pounds is a decent size for our family. I've heard that 14 pounds is about the biggest bird you really want to smoke because otherwise most of the meat will be in the "danger zone" for too long.

Plus, 14 pounds is about as big a bird as I would be able to fit on my smoker.

On Wednesday morning I put together a brine. Pretty simple recipe:

The bird wasn't completely thawed, so the brine also helped thaw out the turkey. When I got back from work on Wednesday night, it was thawed enough that I could remove the various things they put in the cavity.

It was all ready to go by Thursday Morning. 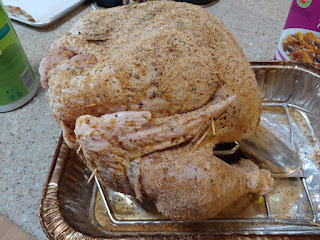 Thanksgiving morning, I took the bird out of the brine, rinsed it off and patted it as dry as seemed reasonable. I applied a rub.

I would give you the recipe to the rub, but I started with what was leftover last time I smoked something ... and just added things that smelled good.

It probably isn't too far off from the Chicken Rub on "Some Useful Recipes for Barbecue", although I do know for sure it didn't have much (if any) sugar in it. 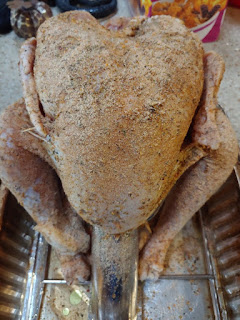 I started up the grill a little after 9AM. I got the turkey on the smoker around 9:45.

I wished that my smoker was a little bigger. The top of the bird was close to the top of the grill lid. Might have even touched just a little.

I'm thinking that maybe next year, I won't use the roaster. Perhaps I'll spatchcock next year's turkey so that won't be any kind of issue.

I tried to keep the temperature of the smoker between 300 and 350. For the most part I succeeded.

The wood I used were cherry chunks. I was happy with how that made the bird turn out. 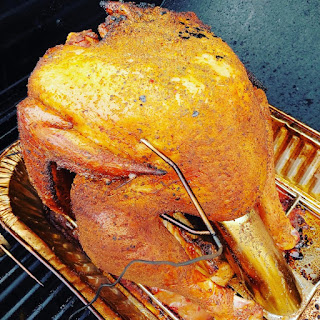 At about 10:30, I re-positioned the turkey, turning it 180 degrees in hopes of keeping the cooking consistent over the whole bird.

At around 11:30, I "tented" the bird with aluminum foil in hopes that the bird didn't get too terribly dark in color. 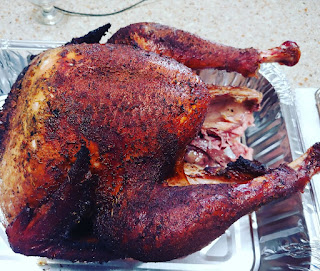 The internal temperature of the turkey hit 159 at about 12:30. I wanted to pull the bird off at 165ish, so I thought it was really close to done.

It was almost another hour before the breast was actually at 165. That seems sort of strange, but oh well ... not too big a deal.

I pulled the turkey off the smoker and let it "rest" for 15 or 20 minutes. I carved it up and we ate around 2pm. This was a bit later than we were shooting for, but we really didn't care too much what time we ate.

Everyone really liked the turkey. Cherry wood was a good choice. My in-laws raved about how juicy it was. I personally think I could probably do better, but not bad for a first time try.

I think my wife's favorite part was that she didn't have to worry about the turkey and so she was able to concentrate on other dishes.

Since the turkey wasn't in the oven for hours, the logistics around what went in at what time and what temperature was simplified.

It really turned out great.

So, I think that I'll be in charge of making the turkey whenever we make it at our house. I do think I'll try spatchcocking the bird next time. If you don't know what spatchcocking is ... feel free to google it.

I also think I'll give myself a little more time and start the cook earlier than I think I need to.

But, other than those two little things, I think everything will be the same.