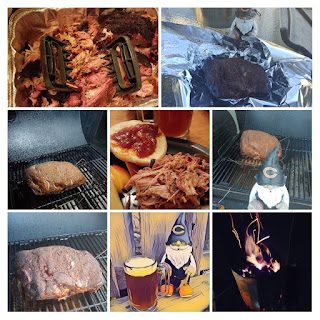 I didn't brew last weekend, but I did Barbecue.

Last time I got Pork Butt, they were on sale for 99 cents per pound. I got two and froze one of them for later.

As you may know, last Sunday was the big Bears vs. Packers game. The Bears won the game and the division.

I love to see the Packers lose. It is even better when the Bears do the beating. Of course, it has been a loooong time since that happened.

Hurray for the Bears!

Anyway ... I decided to smoke pork shoulder. Since it was frozen, I had to thaw it over the week before, so I was committed by the time Sunday got here.

The night before, I applied a rub to the Pork Butt. 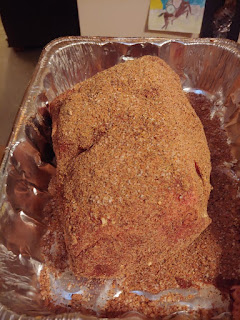 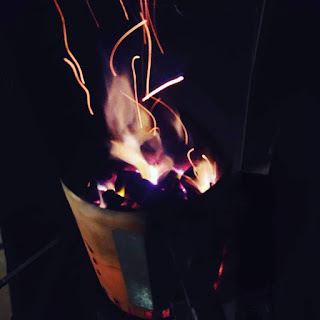 I also put a couple of chimneys of charcoal into the fire box so I wouldn't have to do that when I got up in the morning.

I woke up pretty early in the morning to get the smoker fired up and the pork on the smoker.

At around 4AM, I fired up about a quarter of a chimney of charcoal.

By 4:15, the lit coals were in the firebox. I also added chunks of hickory wood.

Around 4:35, the smoker was at 300 degrees. I put the butt on and closed the damper down a bit to bring the temperature down. 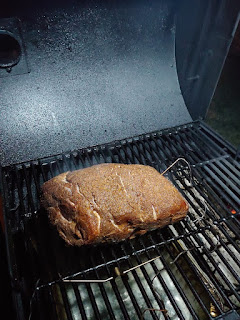 I let the shoulder smoke for about an hour at about 280 degrees. At 530, I sprayed the butt with kombucha.

And I let the pork cook. Every half an hour, I sprayed the meat. I applied more rub a couple times. I added wood from time to time.

The temperature ran between 270 and 300 for the first few hours. 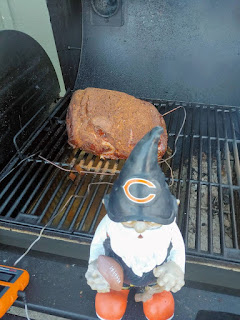 The sun came up. The shoulder continued to cook. The cooking temperature settled in at about 260. 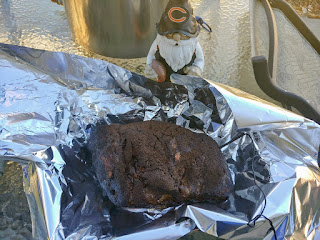 At that point, I fired up the gas grill, and wrapped the pork shoulder. The smoker temperature was down below 250. I didn't want to add more charcoal and I figured that the meat wasn't going to take more smoke flavor at that point. 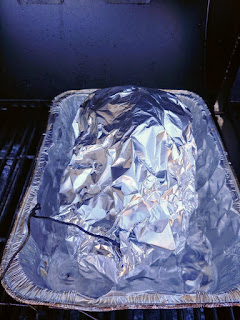 So, I let the pork cook wrapped up on the gas grill. The grill ran consistently between 250 and 260.

By 12:00, the Bears were comfortably beating the Packers. The meat was at 176 degrees. 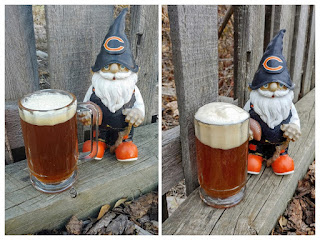 Remember Resilience IPA? I had a growler of Locavore's version. My homebrew wasn't quite ready, but I had some of it just to see how close it was.

It tasted pretty close. The picture above shows Locavore's version last Sunday on the left. On the right is my version today. I think mine looks and tastes a little better, but they are pretty close.

By 15:00, the pork butt was at 200 degrees. I probed it in several spots. It was really tender and easy to poke through.

I decided to take the butt off the grill. I let the shoulder rest in a cooler until a little before 18:00. 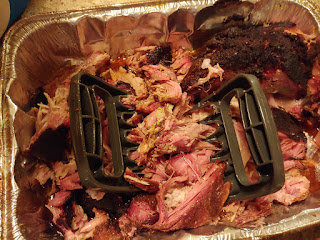 At that point, I shredded up the pork. It was very tender and easy to pull apart. Delicious.

The bark was pretty spicy. The meat was tender and delicious. 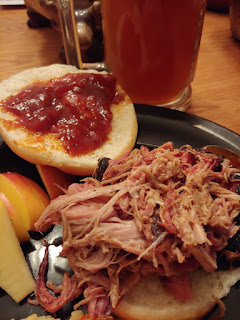 We served it on buns for pulled pork sandwhiches. My wife and I had some homemade barbecue sauce we added. The kids don't like BBQ sauce. 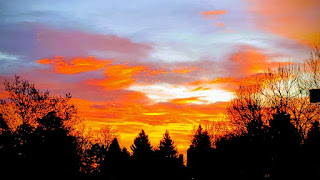 The pork was a hit.

We had leftovers that were consumed over the next few days as lunches. The reheated pork was also delicious.