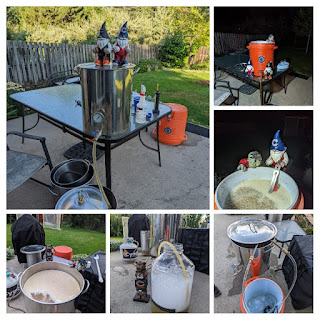 So, last year, I came up with a recipe for N.T.S. Faux Pilsner, which was an experiment to see if I could ferment a lager-like beer at a hot fermentation temperature with LalBrew Voss - Kveik Ale Yeast.
In my various brewing forums, lots of people say they make "pseudo-lagers" with various Kveik yeasts at higher temperatures.
The N.T.S. Faux Pilsner was a nice beer, but it was not very lager-like in my opinion.
The Voss - Kveik Ale Yeast imparts a very ale-like character. It is great for Pale Ales and IPA's. I even tried it out in my McShepardSons "Irish" Ale.
I just wouldn't consider it for "lager" beers.
Regardless, I liked the N.T.S. Faux Pilsner, and wanted to brew it again. I brewed it last Sunday.
I've gotten to a point where I'm low-ish on beer, so I thought it would be a good opportunity to brew a double batch to help get my beer supply back to normal levels. 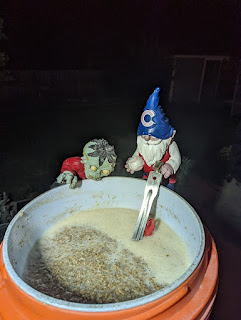 Since I was doing a double batch, I decided to ferment half with lager yeast so the I could compare the N.T.S. Faux Pilsner with an actual Pilsner.
My Anvil Foundry doesn't have the capacity for a double / 10 gallon batch of beer, so I pulled out my old gott-cooler mash tun and the propane.
I did use the Foundry to pre-heat the strike water overnight, which is really nice. 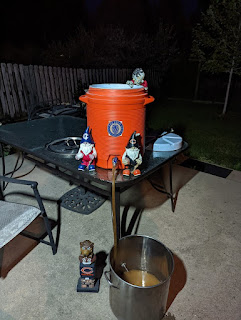 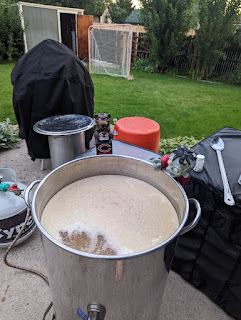 My mash efficiency was better than expected, and my pre-boil gravity was high enough that I decided to dilute the wort considerably.
My boil kettle was very full. With the help of anti-foam agent, I was able to get to boiling without a boil-over.
And the boil went as planned. Everything got added right on the expected plan. 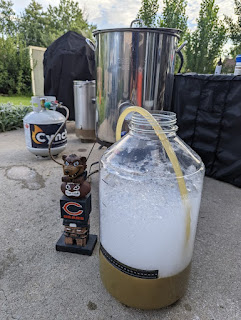 When the boil was over, I chilled the wort to a temperature between 80 and 90, and transferred (around) half to my Fermonster fermentor.
Then, I chilled the rest of the wort some more.
After I switched to my pond pump and circulating ice-water, when I was adding another block of ice, the ice fell in an unfortunate way that broke the outlet from the pump. 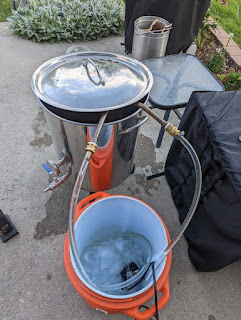 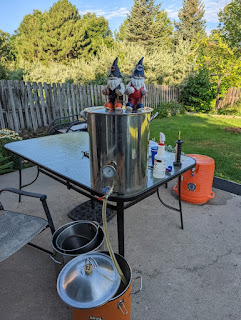 As I type this, the Kveik yeast batch is probably done, although still very hazy (which is typical of my Kveik yeast fermentations). The lager yeast is fermenting away.
By the time this posts, I suspect I'll have the Voss batch kegged, and the lager batch will be finishing up at room temperature for another week. 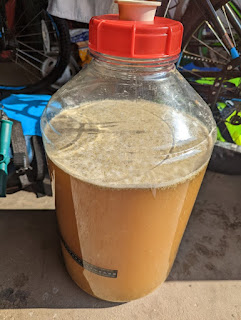 I'm really looking forward to comparing these beers. I expect I'll try a triangle test to see if my perception of the Voss yeast imparting an ale-like character is accurate or if my brain has simply fooled me into that perception.
I'm pretty sure I'll easily be able to tell a difference, but it should make for an interesting experiment none-the-less.
If you bookmark Sheppy's Blog: NTS and follow along, you'll probably see me post how that experiment goes.
And ... as always stay tuned on the regular SheppyBrew Channels to see what is happening with biking, brewing, barbequing, and other things: SheppyBrew's Facebook Page; Sheppy's Twitter Feed; SheppyBrew's Instagram Page; and SheppyBrew's Website.Of course, don't forget to visit this blog often as well!
Go Rockies!
Posted by ESheppy at 8/07/2022 07:46:00 AM