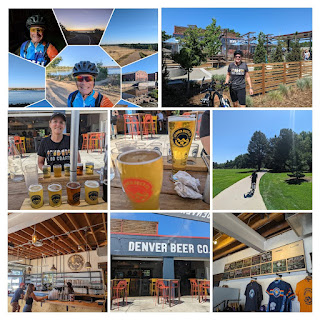 As you know if you've been following the A to Z Denver Breweries series of posts, the SheppyBrew Beer Model and I decided to push on with the 4th round of the project.
Towards the end of July, I posted C is for Comet Brews, and I'm sure you know if you are familiar with the concept and the English alphabet, next up we needed a "D" brewery.
According to the Colorado Brewery Map & List, we had a ton of "D" breweries that we could choose from.
You may also know that on Saturday I completed my First Century Ride of 2022.
If you were paying attention to that post, you probably already know which brewery we chose.
D is for Denver Beer Company - Downing 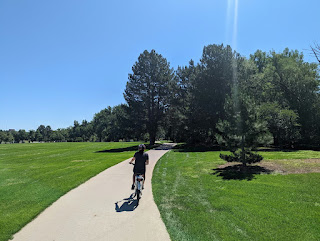 I've actually had my eye on this brewery for quite awhile. I discovered it by accident on a bike ride sometime in the last year or two.
So, when we got to "D" on the A to Z Denver Breweries project, I knew this is the brewery I would pick. 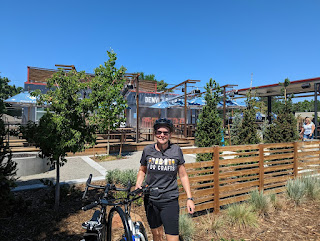 And ... as I mentioned on  First Century Ride of 2022, I returned home after about 80 miles to restock water and check in with the SheppyBrew Beer Model (aka my wife).
The Downing taproom of Denver Beer Company is around a 10 mile ride from our house, so that was a perfect lunch destination to finish up my Century Ride. 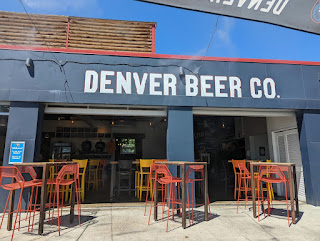 The taproom is located at 2425 S Downing St, Denver, CO 80210, which is a great quiet neighborhood spot.
It is a really nice looking taproom with a great outdoor beer-garden area. They also serve food, which is always nice. 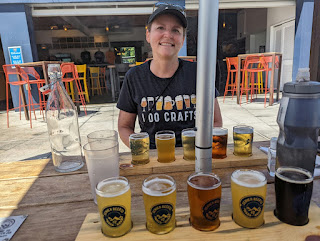 As usual at these sorts of places, we started off with a couple of flights.
Most of the beers are ones I've had several times, but I was able to check in a couple of new beers on untappd while here.
Their "On Tap" page shows both the beers they have and their food menu. 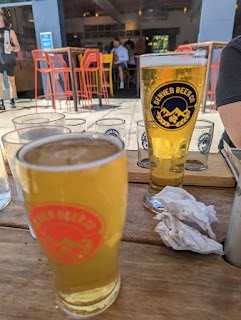 All the beers were really good.
My favorite beer was the Par 4 Hoppy Light Lager, a 4.3% American lager with a little more hoppy flavor.
The Beer Model preferred Love This City Pilsner 5% ABV, which I thought was a nice German-style pils.
The food was really good too. 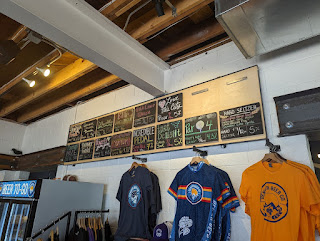 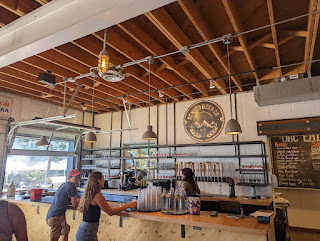 As you probably realize, next up we have to pick a "E" brewery.
According to the Colorado Brewery Map & List, we will a bit of a challenge coming up with a brewery to use for "E". However, I'm sure we'll be up to the challenge and figure something out.
Keep an eye on  Sheppy's Blog: A to Z to see what we pick.
And ... as always stay tuned on the regular SheppyBrew Channels to see what is happening with biking, brewing, barbequing, and other things: SheppyBrew's Facebook Page; Sheppy's Twitter Feed; SheppyBrew's Instagram Page; and SheppyBrew's Website.Of course, don't forget to visit this blog often as well!
Posted by ESheppy at 8/05/2022 06:10:00 AM