L is for Lady Justice - By Guest Blogger, known by many names but for this purpose, MBW (Main Blogger's Wife)

I have known my friend, Kristi, since we were about 3 years old. I moved away when I was 6. We maintained contact through the years, first through letter writing, then through email, then Facebook. She has started her own company, focused on creating a safer and more equitable world for women. She recently wrote a book (titled Quit being so Good), and her summer book tour brought her to the Denver area. She wanted to contact a women-owned brewery, and I told her about Lady Justice, although Sheppy and I had not been there yet. We were considering making it our “L” brewery when Kristi messaged me at work one day and asked me to meet her there. I agreed, and since Sheppy did not visit the “L” brewery, I am making the entry as a guest blogger.

On this 3rd round of the A to Z Denver Brewery series, the last brewery we had visited was a K brewery, so next up is:

Also from their website:
The Lady Justice Brewing Company was dreamed up by Betsy Lay, Kate Power and Jen Cuesta during their 2010 service in AmeriCorps - asking the question, "why can't we brew beer and give back to our community?" What began as a small operation on a custom-built homebrew system in a tiny storage space has grown into a flourishing taproom and movement.

Our giving is focused in two direct ways: through our Community-Supported Beer (CSB) memberships with 100% of profits over cost going directly to nonprofit partners, and through the fabric of the taproom community, highlighting opportunities to volunteer, collaboration brews, and more.

Lady Justice has a nice taproom with a few tables out front with umbrellas to sit outside. They also have a design feature that I have seen other places and love - a garage door that opens so the inside gets a taste of the outside air as well.

The first thing that I noticed in the taproom was the huge mural of three famous women (in keeping with the theme) - Ruth Bader Ginsburg, Marsha P. Johnson and Dolores Huerta. 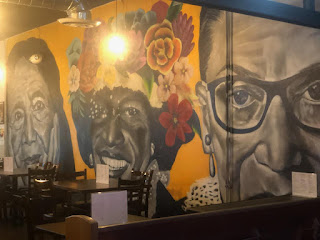 Truth be told, I only knew who RBG was. But there were quotes from the three on the wall, so that helped me figure out who the other two were. I won't give a lesson here, but if you'd like to know more about these amazing leaders, feel free to Google them as I did. 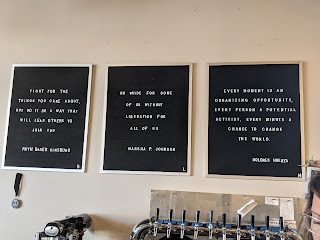 Kristi ordered an IPA, and I ordered a flight. Their flights include 4 beers, so that is what I got - I would have tried more if the regular blogger was with me. Four in a flight was a good number for me. 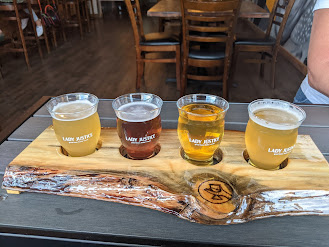 The four I had were:
Liberty Lager - a crisp, clear lager with floral, herbal, and citrus notes
Back in St. Olaf - a blonde ale brewed with rose and hibiscus. Floral, crisp, delicate.
The Forager Collab w/Renegade - Kolsch brewed in collaboration with Renegade for their 10th anniversary, brewed with Colorado blue spruce tips - no hops. Notes of pine and tropical fruit.
The Poet - Kolsch brewed with a kiss of cherries. Light and tropical fruit notes. Subtle sweetness.

I enjoyed all four of my beers. Here is a link to their beer menu if you’d like to see what else they have to offer. You can purchase beer to go from their taproom fridge or have them pour a crowler from the tap. They also distribute to some local liquor stores and even ship to some other states.

Lady Justice allows outside food to be brought in. They have big soft Bavarian Pretzels on their menu, so Kristi and I ordered a couple of those.

One thing that I do when I go to breweries is check out the bathroom (since I usually need to use it while I'm there!) I notice cleanliness, hooks to hang a purse, ways to open the door without touching it, etc. This one had a phone holder on the wall (which especially for women is a nice touch!) 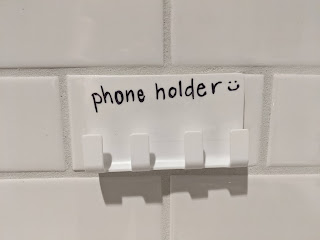 We visited on August 26, Equality Day - the day in 1920 that the 19th Amendment was certified as part of the Constitution. Celebrating women's right to vote - great day to go to Lady Justice! 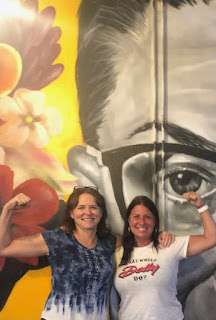 I recommend visiting other days as well!