Lately, I have been waking up at 4:30 in the morning. It is almost always within one or two minutes. I am not sure why. It is probably some sort of witching hour signifying some good fortune coming my way. Or maybe it means I just can not sleep.

Usually I end up getting to sleep (no matter what I do) about the time I should be waking up. That sucks.

It does not seem to be causing me major problems. I get over being tired relatively soon in the day. I am not exhausted going to work. It is just getting up in time to get the kids to school that seems to be hard, and not THAT hard because I do it everyday.

I just wish I could sleep.

So here I am sitting on a bench being cranky while I should be inside working a
Problem on the computer.

I caught myself getting annoyed at people today, when I know the reason is that I have this 4:30 am problem. It is not their fault. So, I know I should not be getting annoyed. I just cannot help it.

Anyway... I wish I could figure this out. If not, maybe I can just accept it.

If you have not seen hockey on a big TV in HD, you do not know what you are missing.

I do not know if I will ever be able to watch hockey on a regular TV ever. 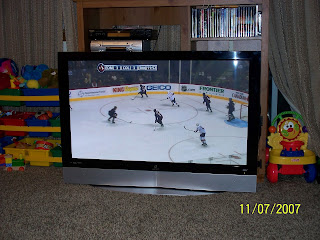 God knows how many starving children someone could buy with the money I spent on this monster, but I saw it on sale for a price I liked and I bought it.

It is much nicer than my old 25 inch TV. It is also ridiculously bigger. I think my family room may be too small now. I guess I will get used to having it n there, but right now it seems out of place. But it is so cool.

So now I have a bigger TV and have to get furniture to hold it. Right now it is on the floor in front of the old entertainment center. It needs to go on something. That will be another expense. I do not have a HDMI cable yet, so I will have to buy one or two. I need the HDMI because at 50 inches of screen, you actually notice the difference between non-HD and HD. I never really saw the point at 25 inches. Eventually I am sure I will want real-surround sound. I'll need blue-ray or an HD DVD player. It is endless. The 50 inch TV is ruling my life. I'll bet Tweedle Beattles invented big-screen HD.

I watched the Rockies lose game one on the big screen last night. 13 Red Socks runs probably looked even worse. It was depressing. Actually I saw most of it on the TV at the health club and it was just as depressing there.

I am a bit cranky today. It is not because of the Rockies. I knew that eventually they would lose and I almost think it is better to get blown out and embarrassed when they lose because they want to win game 2 that much more. If they win game 2, they are back in control of the series and the pressure is on Boston.

Anyway, I am not sure why I am cranky.

I have not been sleeping as well between the hours of 2 and 5 AM as I would like, but that is not it either.
------
I have been without my phone for about a week now. I thought it was lost and we just found it in the Auction Automations trailer. I even order a new Q. I got it on EBay so I do not think I can return it. Maybe Tracy wants a Q. I was pretty lost without a cell phone and I really missed its internet access. It is amazing how fast this little thing made itself indespensible. I actually probably lasted longer than most would have been able to. It is scary how much I feel I need someting that I was able to last most of my life without.

Speaking of not being able to live without, HD is awesome. Now I am pissed how most of the shows are not in HD. I am disgusted to watch hockey on regular old resolution. It sucks.

I did watch the Rockies in the world series on HD. They lost but the picture was fantastic.

Well, I am going to send this. It is so nice to have my phone back.