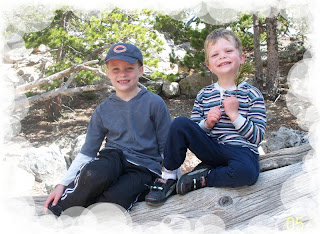 What is a Sheppy Quest? Well, if you don't know, you may be able to figure it out from past postings:

My son played his first flag football game last night. He is on a team with 7 other (maybe 8 other) 7 and 8 year olds through the Denver Rec Center behind our house. They play 5 on 5 against other Denver Rec Centers around the South-West side of Denver. At 5 on 5, there is a center, a quarterback, a running back, and two wide receivers.... although some of the formations use double backs and some of them use 3 wide receivers.

Over the weekend, Tyler and I had to work on the "playbook". Coach Chip told me that Tyler would probably start off at running back, so we concentrated on that position. You might think I'm kidding about the play book, and calling it a book is probably a bit of an exaggeration, but we did indeed get two pages (front and back) of plays that the kids needed to learn before last night's game. 5 running plays and 5 passing plays. I thought Tyler did a great job learning the plays, and he was excited to be working on it.

Before I get to bragging too much, let me just say, my boy is a weak quarterback. His throws neither accurately nor hard. I need to work with him on not getting rattled at the pass rush. He is not a great pass receiver either. If the ball goes right to him, he is more likely than not to catch the ball, but 7 year old quarterbacks do not generally throw the ball that accurately. At least this is the case of all the 7 and 8 year old quarterbacks I have seen so far.

There are, however, two things Tyler excels at so far. First, he is the best "tackler" on the team (in flag football, this means he does a good job getting in defensive position, and pulling the flag off the guy with the ball). The second thing he apparently is good (great) at is running with the ball.

On the South-West Scorpions' first offensive play last night, Tyler lined up at running back. The other team had scored on their first possession, which means the ball was on the 5 yard line. The coach called a "Quick 3", which basically means the running back runs to the right. Tyler got the ball and headed up field. As soon as he was past the line of scrimmage, I said to myself, and anyone else within earshot, "they are not going to catch him". And they didn't. I have to say, I was a bit surprised that he was that much faster than the other kids, but truly, none of the other kids had any kind of chance to catch him. 95 yards later (actually, the field is shorter than that, but I do not really know how much shorter ... probably more like 65 or 75 yards later), Tyler had his first touchdown.

One thing about football at this level is that every kid gets a chance to play every position, and Coach Chip did a pretty good job getting kids in and making sure pretty much all the plays were run. So, it took awhile for Tyler to get his second chance. The play was "Slash" which basically means the running back runs to the left. Once again, Tyler broke through the line of scrimmage, but this time, there was a safety back far enough to be able to get to Tyler and just barely pull Tyler's flags off. That run was only 20 or 30 yards, and very easily could have been another touchdown with a little luck.

Most of the rest of the game was uneventful for my favorite player. He got a chance to play QB once and totally got rattled by the rush. He threw the ball nowhere close to anyone. He played receiver and never was thrown to. The other team scored a couple of touchdowns, and Tyler's team scored another. Tyler played mostly safety on defense, and no one ever got past him (he was on the bench for all the other teams' scores except the first one).

So, we got to the very last play of the game and the Scorpions were down by a TD at about half field. Coach Chip had the kids run a double reverse with Tyler getting the ball at the end of the play. I am quite certain that this play was not in the playbook and I know the kids never practiced a double reverse. And, quite frankly, it was slow to develop and fooled no one on the defense, but once again, Tyler turned on the jets and simply outran everyone to (and through) the end zone.

So, the running stats on my boy were 3 carries for probably about 150 yards and 2 touchdowns.

I do not want to be one of "those" Dads (yet), but I have to say, I feel probably more pride than I should. And, quite frankly, it is going to be a little hard to have Tyler remain humble. I am sort of worried that he is going to demand the ball a little bit. I could tell towards the end of the game that he was not happy about the lack of touches he got. Of course, the goal of playing here is to have the kids learn the fundamentals and not to win. If the goal had been to win, Tyler would have gotten a bunch more running plays. And I have no problem at all how Coach Chip played the game. He basically spent most of the plays working on weaknesses, and the team will be better for it if they stay together long enough to whatever age it is that winning is the goal.

All the kids had fun, and that was the most important thing.