So, I am making an American stout.  See Stouticus American Stout on the SheppyBrew web site for the recipe and the story behind why I am making a stout.  I don't make a lot of stouts.  The main reason this one is a stout is because I had a request that included the name "Stouticus".  I didn't think it would be proper to brew anything but a stout for a beer named Stouticus, so I brewed a stout.

I developed the recipe making sure to use ingredients from McMenamins Terminator Stout (which is part of the story you can read about on the web site).  When I went to the LHBS, though, I tasted black barely and thought it's roasty dryness was too intense to use as much as I had originally planned.  I guess you can say I wimped out, but at the time I thought it was a good decision.  I still do think the decision was sound, but sort of think I should have just "gone for it".  After tasting the wort, I just didn't get a bunch of the dry roast flavors that stout lovers like.  It will be a good stout, for my taste it will be a great stout (most likely).  It just won't have as much "roasty" flavors as a true American stout lover would expect.  Luckily, I know the brewer, so if I decide it needs something, I'll just have it brewed again. 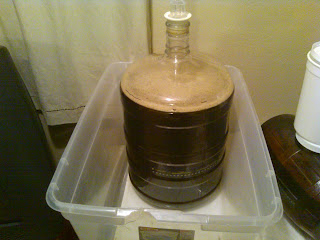 The brew day started early today.  I got my mash started at 6:30 today and let it do its thing through church.  I started sparging when I got home.  This is something I've been doing quite a bit lately.  I don't think there is a disadvantage (or advantage for that matter) in the long mash.  It is a very convenient way to multi-task.  Enzymes do all that work and don't need me to them how to do their job.  I might as well be off doing something else.

I got a "stuck-mash" this time.  It wasn't a big deal because I had planned 3 sparges and it was the last one that got stuck.  By that time, there were enough sugars in the collected wort that I simply added water to the boil and my specific gravity into the boiler was fine.  I do want to figure out what is going on, though.  My sparge last weekend was slow at the end too.  I wonder if the long mash might be doing something that gums up the works.  Don't know, but at least it turned out today.

The boil went as planned.  I ran out of propane in the middle of the boil, but I had anticipated that and had another propane tank ready to go.  The wort didn't even stop boiling.

The wort chiller did its magic wonderfully again.  The pitch temperature was right at 62 after less than 20 minutes of cooling.  It also gave me an excuse to water our front yard tree.  I'm so glad that my wife got me the wort chiller for my birthday.

I ended up diluting the wort at the end because of a high OG.  My volume was right on originally.  I added about .5 gallons and ended up with 5.5 gallons in the ferementor.  I pitched the starter that I had made this past week.  I never really ever noticed the starter fermenting, but this morning, I took an FG reading and it had indeed fermented quite low.  It also tasted really good.  I like the nutty, almond flavor that the WY1272 imparts to beer.  I don't know how much of that nutty flavor will come through in the final beer this time, since it is such a dark beer.  I guess I'll find out.

One thing I don't know about is how to go about keeping fermentation temperatures low in the bigger fermentor.  Right now, I'm simply keeping the carboy in our spare bedroom in a bin with a couple of ice bottles covered with a towel.  This probably won't work well in the summer.  It should be fine for Stouticus this time, though.

Anyway, it was another great brew day.  Hope I have enough bottles to handle all this beer.  But, that is another story.