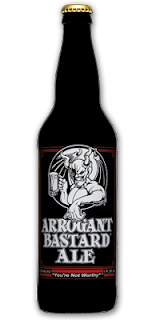 While in San Diego for spring break, I had dinner with a friend from high school.  He is also a home-brewer / beer geek and happens to live in the same town as Stone Brewery, home of Arrogant Bastard Ale (as well as several other great beers).

I've talked about Arrogant Bastard before.  What I had back then was the Oaked version, and I have to say that I enjoyed the Arrogant Bastard that I had fresh from the tap at Stone better than I did the one I had back in July.  I suspect that both the freshness and the oak flavor before contributed to me liking it better this time.  It was awesome.

I love the description on the back of the bottle:

"This is an aggressive ale. You probably won’t like it. It is quite doubtful that you have the taste or sophistication to be able to appreciate an ale of this quality and depth. We would suggest that you stick to safer and more familiar territory–maybe something with a multi-million dollar ad campaign aimed at convincing you it’s made in a little brewery, or one that implies that their tasteless fizzy yellow beverage will give you more sex appeal. Perhaps you think multi-million dollar ad campaigns make things taste better. Perhaps you’re mouthing your words as you read this. "

"At Stone Brewing, we believe that pandering to the lowest common denominator represents the height of tyranny - a virtual form of keeping the consumer barefoot and stupid. Brought forth upon an unsuspecting public in 1997, Arrogant Bastard Ale openly challenged the tyrannical overlords who were brazenly attempting to keep Americans chained in the shackles of poor taste. As the progenitor of its style, Arrogant Bastard Ale has reveled in its unprecedented and uncompromising celebration of intensity. There have been many nods to Arrogant Bastard Ale…even outright attempts to copy it… but only one can ever embody the true nature of liquid Arrogance!"

I copied that text from Stone's web-site, and it seems like an awful lot to put on a bottle.  I know the sentiments on the bottle are the same, but it might have different (shorter) wording.

Everyone except Tasty (who actually brewed it) voted it was cloned.  They pretty much decided to take that recipe and pasteurize it to see if that makes a difference.  Personally, if I brew it, this recipe is good enough for me.
Posted by ESheppy at 4/07/2011 11:34:00 PM