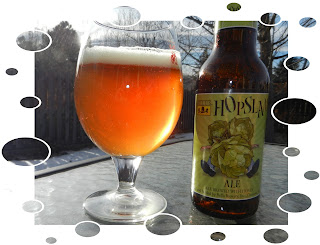 It has been awhile since I've had any of the beers on my Best Beers in America List (see A couple more beers from my list for the last report on this blog.) I am lucky that my buddy Scott (whom I usually refer to as CrazyBrody) has been looking out for me. Do me a favor and check out his Homebrew Blog.

Bell's Brewery has recently released its annual Hopslam ale and Scott (who lives in the mid-West where it is possible to purchase beers from Bell's Brewery) knew that this was a beer on my list and offered to pick up a some Hopslams and UPS a couple of them to me. I accepted his offer, he was able to pick some up and get a couple of bottles out to me in a UPS package that also contained a couple of his own home-brewed "Nanci's Brown Ale" (which is a fantastic beer, by the way).

He got them to me last weekend, but it was not until today that I took the time to open one of the Hopslam bottles.

As you might imagine from the name, Hopslam is an IPA (what a surprise, right?) Actually, it is a double IPA. The back of the bottles says it is "a biting, bitter, tongue bruiser of an ale. With a name like Hopslam, what did you expect?" It is also a 10% ABV beer, which is something I didn't take the time to check until I started typing in this blog post. If I say something wildly inappropriate during this post, I blame the alcohol. To be honest, it doesn't taste like a 10% ABV beer to me (this is a good thing). I am feeling the affects now, but never during the glass did I feel like this tasted like a huge beer like this.

And, I gave blood today. Maybe today wasn't the best day to try this ....

Anyway, Hopslam uses a lot of hops and it uses a bunch of different kinds of hops. Bell's websites says it adds 6 different hop varietals in the kettle and a "massive" dry-hop addition of Simcoe. This is a hoppy beer, but it doesn't come across as completely bitter as lots of double IPAs. I think it does a pretty good job of blending those hops into the whole malt bill.

The malt base of the beer is substantial with a slight honey taste (the bottle actually says "brewed with honey"). I do think the beer is pretty well balanced considering how extreme it is in its ingredient list.

Overall, I've had better double IPAs, but I have had much worse ones as well. I'm glad my buddy CrazyBrody is so on top of things to have gotten me this beer so efficiently. Now, if I can only get my act together and return the favor to him.

Hopslam was #5 on my list. I have now tried all 5 of the top 5. I have tried all 10 of the top 10. I have now had 37 of the entire list (52 total). I have far surpassed my expectations of how I would do this year. Scott even says he'll send me a couple of Three Floyds beers (motivation for me to get off my butt and get him some beers). I also have the Avery Maharaja sitting in my fridge right now. I might get well into the 40's on this list. Last year I only got to 25, and was happy to get to 50% (well, a little less than 50% since the list actually had more then 50 on it).

In case you are wondering, here are the ones still left on my "not tried list":