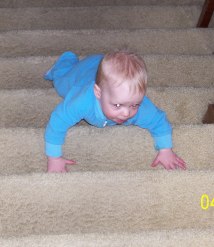 Connor (my adventurous baby) is crawling around the family room, pulling himself up on things (furniture and the like). This game seems to amuse him quite a bit and he keeps looking at me with the proud look on his face as if to say "look at me Daddy". And of course I tell him how wonderful he is to do such amazing things. I mean, come on, how many babies are able to pull themselves up on things?

His fascination with the steps is sort of fun, but a little scary as well. He is talented enough to climb all the steps in our house, but not quite experienced enough to know that you don't try to sit halfway up on the step before the one he is actually on. So, we have to supervise the climbs. It is fun to watch him climbing the stairs. I imagine him as a mountain climber. Maybe someday he will climb 14ers with me.

Once Connor was done lapping through the rooms on our kitchen level, he decided it was time to climb the bigger stairway to our bedroom level and go into the bathroom. This apparently is one of his favorite activities. He loves to climb up those steps and he really loves to go into the bathroom and put things in the bath tub. I am not sure what is so fun about that, but it obviously is a blast.

After that, he went into his room, crawled to his nightstand and grabbed his tooth brush. The tooth brush is probably his favorite toy right now. He really likes getting his teeth brushed or even brushing his own teeth. 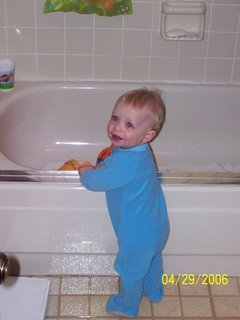 Unrelated to this adventure, Connor's other favorite toy is the dishwasher. I imagine that if Connor could find a dishwasher full of toothbrushes, he would be really excited.

Another pause in the blog. The adventure continued. Up the stairs down the stairs standing up sitting down. Grabbing and playing. Giggling and squealing. I wish I could find so much fun in the ordinary world around me.

Connor is currently in Tyler's room playing with Tyler's toys. Tyler is not around and I am not really supervising. I am listening to him talk to the toys. His voice is probably best described as gleeful; at least his current voice.

Now Connor is back in my room (where I am typing this). The baby still does not talk in English, but he does talk a bunch in his own language. it is pretty cute.

Anyway.... I guess I will close out these ramblings. This probably is not as interesting a story as I intended it to be, but trust me, that has more to do with my writing skills than the subject.
Posted by ESheppy at 4/22/2006 06:46:00 AM