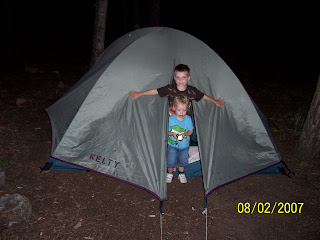 "Camping camping. Camping camping. Camping camping." sang two year old Connor in the back seat of the minivan. He sang these words over and over. It was a tune his dad did not quite recognize, but quite enjoyed. And it was a little familiar. Connor had probably used the tune before to sing some other one-word song. "We go camping" had been Connor's favorite phrase for days now, ever since Daddy had brought up the possibility of using a "boy's day" to go camping with just the boys.

Sitting next to Connor, his five year old big brother, Tyler was in charge of the animal crackers; eating one; handing one to his brother. Handing one over, eating one. Soon, he would run out and ask his dad if he could move on to sun chips. Camping had also been one of Tyler's topics of conversation over the past couple of days. When Connor had been very young, and Tyler had been three, Tyler had gone on a "just me and my dad" camping trip. Tyler and Daddy still talked about that trip. There was some excitement about leaving Mommy at home while the boys went on their little adventure. Hopefully Tyler could use his rank of Big Brother to help his little brother enjoy the experience.
Daddy turned off 285 to head towards Buffalo Creek, a little town about an hour Southwest of their Denver area home. This general area of Pike's Peak National Forest was special for the family. When Mommy and Daddy first moved to Colorado (before the boys), their first camping weekend had been along Forest Road 550, minutes South of Buffalo Creek. Their first backpacking trip in Colorado, and most of their subsequent backpacking trips, had been in Lost Creek Wilderness which they had accessed a bit further down on FR550. Tyler's third time camping and also the "Just me and my Dad" trip had been in Buffalo creek campground which was also down FR550. Connor's first camping trip was at Lone Rock Campground which was along the Platte river a bit further South of the town of Buffalo Creek. Daddy's last "Sheppy Quest" had also been in the lost creek wilderness in the same general area.
Daddy checked his cell phone. No service. Shoot. He should have called Mommy before now. Too late. He would have to suffer the consequences later. Daddy even now did not know where they would camp tonight. He was thinking one of three possibilities: Buffalo campground (the location of just me and my dad), one of the non-official campsites along FR550, or a campground called Kelsey which they had never been to but passed several times on their way to other camping adventures.
Approaching FR550, Daddy still had not decided which way to head, so he asked Tyler which way to go. Tyler did not even hesitate; Kelsey campground would be the place.
The sign was partially hidden coming from the North. Daddy passed the campground and had to turn around to come back. The campground was quiet in the early evening. Only one site other than the campground host was occupied, and the boys and their Dad saw no one as they circled through looking for a site. Just about every site had a reserved sign on them, but they were all reservations for the weekend .... Starting tomorrow.
After a couple of loops around the campground road, they settled on site number 10. It was pretty large, had a decent number of trees, and a bunch of good rocks to climb on.
Daddy and the boys unpacked, setup the tent, and setup for dinner sort of slowly. The boys for the most part helped by climbing rocks and pushing their toy dump trucks around. They also did an excellent job collecting rocks.
Rain came through. It was nothing heavy and Daddy just put rain jackets on the boys and kept at the tasks at hand. Connor and Tyler thought he rain added to their grand adventure.
By the time supper was ready, it was getting dark. They ate in the rain in the darkness. So cool. The boys just thought it was the most fun they had in weeks. Maybe it was the most fun they had all summer.
It was downright dark when dinner was over. Daddy put the boys in the tent with a lantern, put Connor's PJs on him while Tyler put his own on. Then he asked Tyler to read to Connor while Daddy cleaned up the site. We don't want bears to come get our stuff Daddy said. 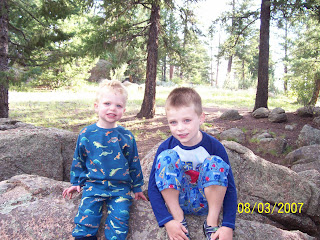 While Daddy cleaned up, he heard the boys giggling up a storm. Tyler read one book but just being in the was just so much fun, it was hard to concentrate. Daddy was not sure what they were doing exactly, but it was obviously a blast.
It was not too long before Daddy joined the boys in the tent. He was pretty proud to have a couple of kids who do not need to cling to their parents. He was especially proud of big brother for agreeing to take care of his little brother while Daddy needed to do some work. Daddy read the boys some stories and tried to get them to go to sleep. Sleep did not come very quickly. There was just too much excitement. It all made Dad smile.
He loves his boys and always will.
Posted by ESheppy at 8/23/2007 06:33:00 PM