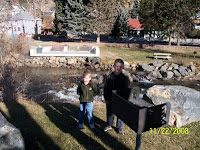 Do you know about geocaching? I know at least 33% of my blog regulars know about it. Apparently, my sister sent my wife something about it some time ago. Of course neither my wife nor my sister thought that telling me about it would be worthwhile. I guess it is ok because a co-worker told me about how he does it, and I signed up on http://www.geocaching.com/ a few months ago, but we have never taken the time to try one.... until this weekend.

So, Saturday morning, I thought I would look around some of our usual weekend haunts for easy geocaches. After awhile, I found a couple of them in Idaho Springs. Beautiful. That gives me an excuse to take the family to TommyKnocker Brewery.

So, really, if you have kids and need an activity to do with them on a nice weekend day, two or three geocaches is a great idea. Whoever came up with this idea is a genius. Basically, a geocache is a treasure hunt. You need a GPS receiver. The web site is just full of GPS coordinates of little hidden containers all over the place. Your job is to go to the GPS coordinates and find the treasure.

We parked about 1/10 the of a mile from our first geocache. The GPS took us to a gas station in Idaho Springs. I felt a little self-conscious searching around the place, but it did not take long at all to find the geo-cache container. It had a few toys in it. On the advice of my co-worker we had made sure we brought little knick-knack type toys to leave in place of a couple of the toys in the container. So, Tyler got himself a little toy ostrich and Connor picked out a Rocky Mountain National Park pencil. 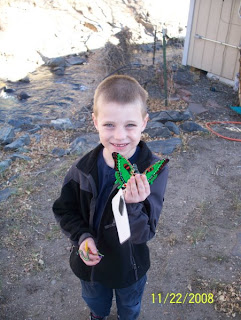 We took a picture of Tyler with a "travel bug", which is a special prize which is meant to be moved and tracked from Geocache to Geocache. As this was our first one ever, we decided we did not want the responsibility of recording this little thing, so we left it. If we ever come across another, we will probably take it and move it to the next one.

As we were walking back to our mini-van, a lady I think was an owner of the gas station asked us "did you find it?" Apparently, I did not have to feel self-conscious about looking around her establishment.

The coordinates of the second one took us to the parking lot we always use when we are visiting our favorite Idaho Springs establishments. Finding this one was a bit more of a challenge. The first one was out in the open. This one was under a smaller rock which was under the rock Tyler and Connor are sitting on in the photo below. The container was too small to hold anything other than the log book and a pencil. 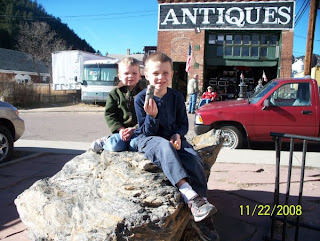 So, our first two geo-caches were successes. And, more important than finding the treasures, now we have a pretty activity to do just about anytime we want.

It was too early for lunch, so we drove up into the surrounding mountains for a little hike and family photos. Here are a couple of the pictures we took up there: 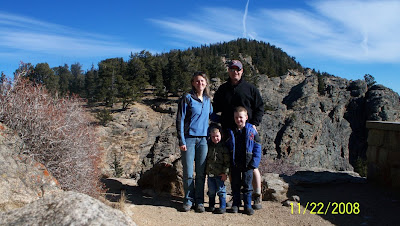 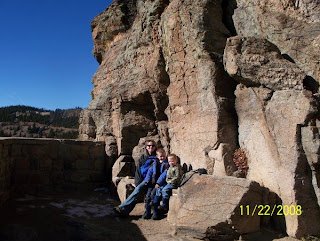 So, if you have a GPS receiver and need something to do sometime, go out to http://www.geocaching.com/ and get yourself a few coordinates. It is absolutely a fun activity, especially for families with kids like ours.
Posted by ESheppy at 11/23/2008 05:20:00 PM