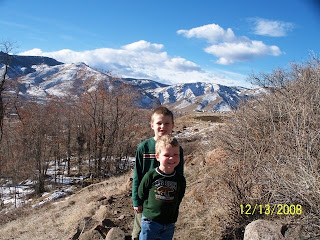 We have been holding on to the travel bug that we got just before Thanksgiving (see Boy's Day) a little bit longer than we wanted. As it was our first travel bug, it did not seem very polite to keep it in our house too long. We did some geocaching last weekend, but the ones we found were too small to hold the bug, so I figured we should try to get rid of it this weekend in another geocache. 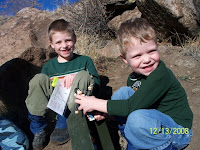 I found a couple of good candidates on the geocaching site (http://www.geocaching.com) around Golden. Golden is a nice little drive for us, and is a nice little town in which to walk around. Plus, Tyler and Connor really like eating at the Capital Grill because they serve mini-ice cream with their kid's meals.

Anyway, the first geocache was one called "The Toy Box" in an open-space park just North of CO58. Actually, I never realized this little park was there. It appears to be a hot-spot for rock climbing, because all the people there (except us) were hiking up the trail with rock-climbing equipment strapped to their backs. 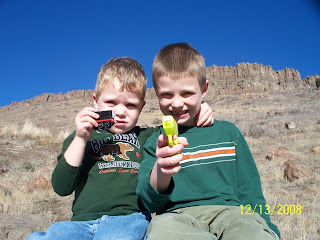 Tracy was the holder of the GPS unit and brought us up the trail in the wrong direction. Eventually she mentioned to me that the distance was going up rather than down, and we went all the way back to the parking lot and then the opposite direction. I guess she knows now how the directional arrow works. Maybe.

It was a nice sized cache full of good toys. It took the boys awhile to pick out what they wanted to take, and we left the travel bug there for someone else to take. I feel sort of guilty that I keep the bug for more than two weeks and it only traveled a couple miles. Oh well. 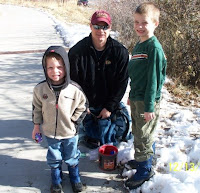 The second geocache was off a bike path down by the Golden Railroad Museum (which is another great thing about Golden). This time, Tracy brought us the right direction. It was called "Steps to Nowhere" and right where the GPS brought us were little steps going down ... basically into nothing.

It did not take us long to find the Foldgers Coffee Can full of more nice treasures. The boys traded a couple more nice little toys. We have to remember to add more toys to trade for next time.

After this geocache, we went to a little park a few blocks from "Downtown Golden" to park, and walked up the Clear Creek bike / walking path to Washington Avenue (which is basically the main street through down town Golden.) We walked to the Capital Grill and had ourselves a nice little lunch.

We walked back up the creek, and took the picture below in the middle of the creek. Then, we played in our favorite Golden playground.