Tyler got off school yesterday, but it being a Wednesday, Tracy had to work. Being the lazy worker that I am, I decided to spend the days with the boys so Tyler would not have to spend his holiday in La Petite. We decided to have a "Boys' Day" in Golden. Most of our trips to Golden involve the Colorado Railroad Museum, but this time we decided to try a couple more Geocaches. (see my entry Geocache if you are wondering what geocaching is).

Our first stop was in the "Historical District", full of old historical looking houses. The geo-coordinates brought us to "Golden City Brewery", which as you can tell from the sign is Golden's 2nd Biggest Brewery. You probably know this, but in case not, the Coors Brewery is Golden's Biggest. This 2nd one is a distant 2nd. It is about the size of our house. I think it actually IS someone's house. 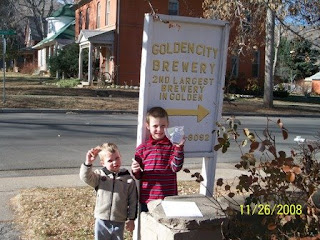 The cache had a bunch of stuff to trade. Tyler grabbed our first Travel Bug, so we are now in possession of troop1013 Little Buggie. Now, of course, Tyler wants to start a Travel Bug of his own. I think we will buy 4 and have a little contest to see which one moves the farthest. I think we are also going to have to set up a cache of our own. Gosh this is addictive. 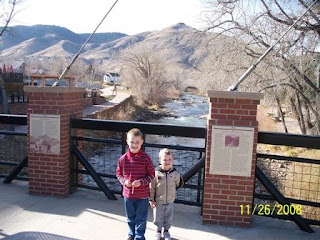 After the Brewery, we walked down to Washington Avenue, the main road through downtown Golden, and across the bridge over Clear Creek. 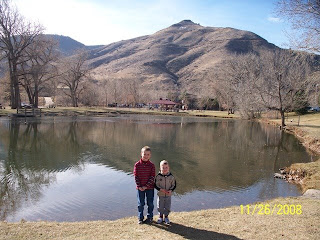 We walked about half a mile to our next set of coordinates which brought us to a park with a pretty good sized pond. We were unable to find this cache. It looks like from the log, the last person here was unable to find it too. I hope Muggles did not get it! (Isn't it exciting... I am calling non-geocachers muggles already) It is listed as a micro-cache, so it is pretty small, so it might just be we missed it. I think the boys were itching to throw things into the pond and maybe hit the playground. So, that is what we ended up doing. 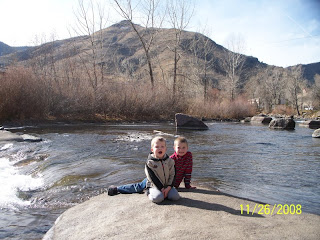 After the park, we walked down the Clear Creek bike path towards down town where we had lunch at the Capital Grill.

After lunch, the kids played down by the creek some more.