Somehow, we lost 3 months of pictures off the SD card of our camera.  It is unusual that I go 3 months without copying our pictures to the home computer so that I can work on our yearly calender and/or the Colorado Shepard DVD, but for various reasons, I had not copied the pictures yet this year.  So, most of those pictures are really truly lost.  This sucks, but I suppose worse things have happened.

So, today, we started off the day with the task to get family photos for January, February, and March.  Luckily, it was just a beautiful sunny day after a day of pretty decent snow fall.  This combination makes for great family pictures.

Here are some (not even close to all of them) of the pictures we took today. 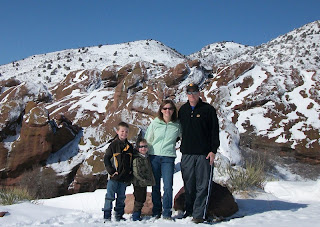 Here we are at Red Rocks.  Not a very original picture for those of you who get the calendar every year, but it is a nice view ... especially in the snow. 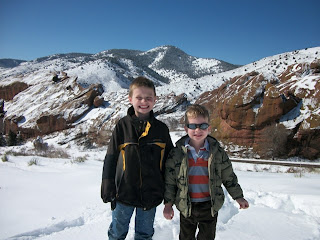 The boys at Red Rocks. 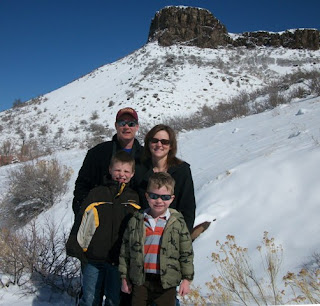 This is the family in front of the Table Rock in Golden.  The boys used their snowshoes to get up this path, to this point.  We didn't go too much further up the path ... even though I had geo-cache coordinates loaded into the GPS.  Apparently, when my kids spend hours playing in the snow, socks and feet end up wet and cold even when they are wearing snow boots. 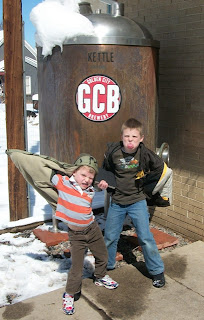 This is a picture of the boys in front of Golden City Brewery, which is Golden's 2nd largest brewery.  We have been past this several times, but I've never been in to try a beer from here.  Today, we did stop in and get a sampler platter.  Both the beer model and I think that SheppyBrew has a better lineup of beers, but GCB does have some pretty decent beers.  Unfortunately, the beer I was most interested to try, their Evolution IPA, was out-of-stock.  I guess I'll have to go back sometime and try that one.  They also have some interesting sounding seasonals that I will have to try. 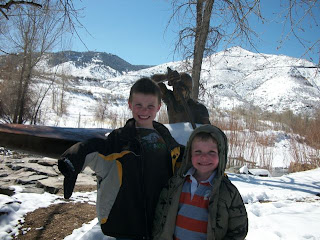 Here is another picture of the boys.

So, we did get great pictures today to cover the first 3 months of the year of our calendar.  I guess it was not worth crying over losing the photos we lost after all.

This morning was also a decently busy day at the SheppyBrew brewery.  I bottled up my Stone Soup IDA.  The beer finished up with a final gravity of 1.016, which makes this the best attenuated beer that I have ever done.  Based on the sample, the dry hopping really seems to have turned out well, making this a great example of a double IPA ... except the chocolate malt makes it almost black (IDA stands for imperial dark ale).  I am really looking forward to trying this beer after carbonation. 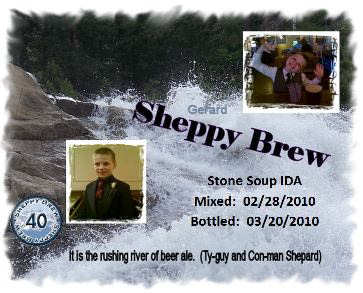 I also did a yeast starter of Wyeast's 3944 (Belgium witbier) yeast.  My intent on this starter is to divide it up to use in 3 or 4 batches of various witbier recipes that I have designed.  Since my last few brews have been darker and/or extremely hoppy beers, my supply of lighter beers for my beer model have been dwindling, so I need to brew some beers that my wife will enjoy.  My first of these will be Buckwheat's Belgium Pale Ale, and the next one after that will be one of those witbiers.  I think I'll brew up the Buckwheat tomorrow.  The first of the witbiers will probably be a Tuesday night project.