There are only a couple of times a year when I wish that I had a snow-blower.  Usually those days are during one or more of our annual March (or sometimes April) snow storms.  Today was one of those days for awhile.  The snow today, like most of the Denver snowstorms in March (and April) was deep and wet.  Translate as HEAVY.

My neighbor started his driveway just a bit before I started mine.  It took him just as long with the snow blower as it took me without a snow blower.  In fact, he started before me and I finished a little before him, so I guess I was faster than he was.  He had to keep stopping to clear out clogged snow from the machine.  He swore at it a few dozen times (and those were just the times I heard him swear.  I assume he did more swearing that I could not hear).

Our driveways are about the same size ... not big.  It only takes a few minutes to clear our driveways when the snow is light and fluffy, so I would not need mechanical help on those days.  And apparently, on days like this, when the snow is wet and heavy, and I would like to have help removing snow, there is no real advantage to having the snow blower either.  I'll have to remember that when I am thinking of buying one next time.

Of course, I was a lot more tired after shoveling than my neighbor was after pushing his machine.  But, I did swear less. 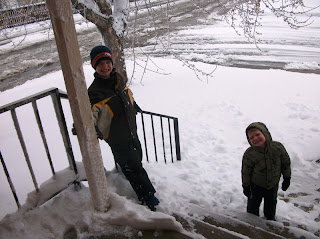 The boys were off school today due to snowy roads.  Both my wife and I worked from home.  It is much easier to deal with wild children as a team effort.... especially when work is expected to be completed during the time with those wild children. 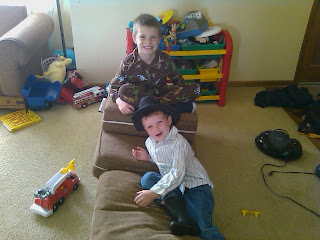