Not sure what to brew next. I have it narrowed down to an American Pale Ale or an Indian Dark Ale or a Belgium Witbier. Any votes?


What to brew next? Indian Dark Ale or APA or Belgium Wit?

I got a pretty decent response on FaceBook.  I usually do when I post similar questions.  I even got one response from twitter.  The results were:
I thought that was a good result.  I'd brew my Tommy Hawk APA this weekend and then I could finally brew my  Stone Soup IDA a few weeks after that.  This would leave Whisky Wife Wit to be ready for drinking as a spring / summer seasonal.  But WAIT!!!  The Beer Model decided to weigh in:


Belgium Witbier! Can I vote more than once? Or does my vote weigh more then these APA/IDA lovers? 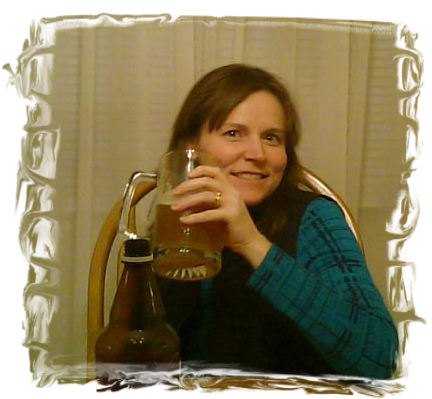 Well, as you may already know, I am married to the Beer Model.  You may also know that I'm an extremely whipped husband.  She is much hotter than I am, and she has a real easy time influencing me.  So, it probably doesn't come as much of a surprise that Whisky Wife Wit won despite the fact that it got the least number of votes.  As it turned out, it got the only vote that counted.  I suppose next time, I'll just ask her what she wants me to brew.  I might have to ask for special permission to brew anything real hoppy or dark.  Not sure she'll ever let me brew my IDA as it is both hoppy AND dark.

When it comes down to it, though, I posted the question because I wanted to brew all three of those beers and I don't have a 3-sided coin (or enough fermenters available to do all three).  None of those other voters are going to help me drink the beer (I'm sure they would be willing, but they all live outside the SheppyBrew distribution area).  It might as well be the Beer Model who decides.

It you've never had Whisky Wife Wit (previously known as Whisky Wife Wheat II), it is a lot like Blue Moon's Belgium White.  I think it has a slightly smoother / creamy and fuller bodied mouth feel which really works well with the the orange flavor.  It might have a slightly more authentic "Belgium" spicy phenolic character than Blue Moon, but it is still pretty restrained compared to lots of Belgium wits I've had.  It has what I would consider the perfect amount of "Belgium" in it.  This, along with the oat and wheat flavors combines with the orange and coriander for a nice complexity.  I find that every sip I take will bring out a slightly different flavor to my attention.  It really is a nice beer IMHO.  Apparently the Beer Model likes it too (at the very least she likes it more than APA's or IDA's).

Part of the reason WWW was on the list is because I've had some Belgian Witbier yeast (Wyeast 3944) harvested from when I brewed my last series of wits.  I think it has been in my fridge since last May.  This is longer than most will suggest that you store harvested yeast.  I was not completely sure it would still be viable.  So, I have been building it up with a series of starters.  It did get real active replicating and fermenting in the starters, so I think it will work fine.

..Just as an aside, I gave the Screwy Brewer my standard link on how to harvest yeast and I think he improved upon it.  I will now be using his blog entry as my new standard link.  He was also nice enough to mention my name and link to my website in the post.  Now, back to our regularly scheduled blog entry ....

If you followed the link above to the recipe, you may have noticed that I am doing this as a partial mash rather than all all-grain.  The main reason is that between the flaked oats and the high percentage of wheat, I am a bit concerned about a stuck mash with my usual process.  By doing a partial mash in a grain bag and "steeping" the bag containing the mash rather than a traditional sparge, I don't have to worry about that possibility.  Someday, I'm sure I'll do all-grain mashes with wheat and / or oats, but just not this time. 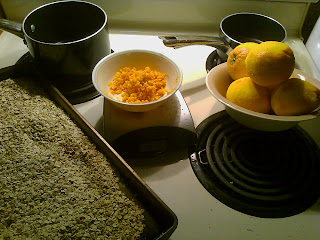 I had to get up early on the brew day to purchase the oats and oranges.  I used the King Sooper brand quick oats and got 6 (used 5) navel oranges.  This time, I "toasted" the oats just at 325 in the oven for about 15 minutes on 2 cookie sheets.  Palmer had suggested that on one of his Brew Strong shows and also in a BYO magazine article.  The zest came to 2 1/8 oz on my scale.  I called it good enough.

My recipe said to use .79oz of coriander.  It turns out I only had 5/8oz, so I called that good enough as well.  That actually seems like a bunch of coriander, so I am really hoping that I didn't make a mistake documenting the amount last time I made this.  RDWHAHB, right?

And then, my partial mash started out sort of badly.  The original strike water was the perfect temp (sort of rare in my process), but did not seem nearly enough.  The mash was a paste and the temp was way down below 140.  I quickly heated up about a gallon of what was going to be my sparge water and dumped that in.  The mash temp magically went to 154 (I got lucky there).  I guess you could say I did my first (unintentional) step mash.

My water volume was a bit high.  So was my OG into the kettle.  I think maybe my little kitchen scale is not as accurate as it used to be.  But, it isn't big enough a difference to get worked up about.  The boil went as usual.  I only did a 60 minute boil this time since it was not all grain.  The first hop addition went in at the 50 minute mark.  The only other addition was right at flame out.

One thing I have to address is getting a wort chiller for my 8 gallon pot.  The ice bath is not as efficient at the larger volume of water.  Plus, it is almost my birthday, and that will make a great toy (if no one gets it for me).

My OG was high (1.058 compared to recipe 1.050) as well.  Part of it is not being used to the bigger pot.  The fact that my scale might be having me add too much LME might be an issue too.  Well, I'm ok with a higher alcohol beer.  The orange aroma from the pot was great.

I'm looking forward to drinking and sharing this with my beautiful Beer Model.  I might even share with others.


By the way... I created a RSS Feed for the SheppyBrew website this weekend.  If you would like to subscribe to updates, the feed is:  http://www.sheppybrew.com/rss/RSSHandler.ashx .  I am using twitterfeed to automatically tweet whenever I make an update to a page or if a comment is made on one of the pages.  Yes, I'm a geek.
Posted by ESheppy at 1/29/2011 12:43:00 PM