You may or may not remember that I brewed this batch towards the end of October (see Brewing the 2012 X-Mas Ale if you would like to refresh your memory).

It had a very vigorous fermentation with lots of blow-off. After a week, I racked it into a secondary fermentor along with about 1 tbsp of peppermint extract. It has been in the secondary almost 3 weeks.

I thought the sample I had today seemed like about the right amount of peppermint, but I think maybe this beer is going to be another one that has a schizophrenic flavor. Some days I will think it seems awesome and on other days it will seem to have too much peppermint. Last year's X-Mas Ale was that way with its hazelnut flavoring.

Of course, we will have to see how I feel when I drink the finished product. I think maybe next year I won't add festive non-beer flavoring. I might just make the base beer and call that my X-Mas Ale. Again, we will see.

The 2012 X-Mas Ale came out to 8.3 ABV, which makes it my biggest X-Mas ale. It has a nice base of chocolate and caramel malts with a very noticeable peppermint aroma and flavor. It has a chocolate candy cane character which should be a nice treat on cold (hopefully snowy) December nights. I am sure the high ABV will help warm up the body.

The bottling was not too bad. Obviously, it was not as easy as kegging a batch, but for having to bottle everything went as it should. As usual, I racked into a keg and used my Blichman Beer Gun to fill the bottles. 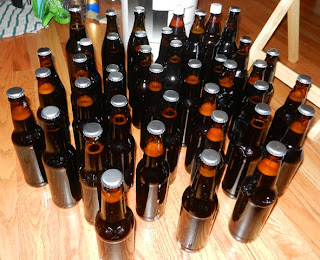 I have the bottles sitting in a conditioning cooler in my basement. I will let them carbonate for two weeks before tasting one sometime around mid-December. I will have plenty for my drinking pleasure for the Christmas season.