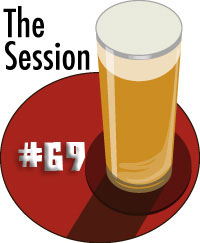 Next, I would make craft - beer drinkers and home-brewers less sensitive. There is an attitude that it is us against the world and the huge brewers have an evil empire that is out to destroy the beer that we love. We are way too easily offended.

I have posted the following Buffalo Wild Wings commercial before.


In my opinion it is funny, and it absolutely shocks me how offended lots of homebrewers apparently got about it. Most of the comments on youtube are extremely negative. People accuse BWW for not understanding home-brewing. There are lots of attacks about the poor quality of beer served at BWW and that it is a horrible restaurant in general.

Personally, the BWW that I go to has a pretty good beer selection, and I like their food. And I think the commercial is hilarious. It is a parody and not intended to represent reality. I have to assume that the same people who are offended by this commercial must have thought Buffalo Wild Wings across the country actually each have a sophisticated network to cause various sporting events to go into overtime.

And even if it is an attack on us, who cares? Seriously, I have much more critical things to worry about than what any particular restaurant thinks about me. People need to Relax, Don't Worry ... Have a HomeBrew (maybe even one with a special ingredient)

I also find many of the Bud / Miller / Coors commercials amusing. And similarly, it surprises me how many craft beer fans criticize the big-boys for marketing their product. Personally, I don't buy beer based on these commercials, but I don't see why I can't have a chuckle when one of the funny commercials come on.

So, the 2nd thing my magic wand would do is make people less sensitive about beer. Beer is supposed to be fun. RDWHAHB.

Whenever I am at a restaurant, I ask what they have on tap. Assuming the server even has the list readily available, sometimes the server will get to a beer I am unfamiliar with. If I don't know the beer, I have to ask what kind of beer is it. It shocks me how often I get answers like:


"Oh ... it is a microbrew." with no additional information.


"It is [name of brewery]'s seasonal." with no mention as to the type of beer it is.


It is bad enough when I get this at national chains (oddly enough this has NEVER happened to me at Buffalo Wild Wings), but a couple of times I have gone to brew-pub type places where the server doesn't even know what some of their own beers are like. True story: one time we were visiting my in-laws and they took us to a pizza place that also brews some of its own beers. I asked the waitress what one of their beers was like and her answer was: "Oh ... It is a microbrew." There was a bit of an awkward silence as I waited for more information. The only other piece of information she gave me was "I think we brew that here."

I am not saying that every server needs to be cicerone certified, but is too much to ask that the person serving me drinks knows SOMETHING about the beers they have on tap? I am not talking an in depth flavor analysis. I would be satisfied with the server just knowing what style the beer is.

So, if is my perfect beer world, every beer server has to know enough about their beers to describe them to me. Actually, I take back my previous statement ... everyone does has to be cicerone certified. Wouldn't that be perfect?

And in my perfect beer world ... no one criticizes anyone else for differences in beer preference. Obviously, this is my perfect beer world, so those stupid low-carb beers no longer exist (see above). With those out of the way, we should all respect all styles of beer. Not everyone has to like all styles of beer ... that would be silly. But everyone should respect other tastes and allow that just because you don't like a beer style, a beer in that style can still be considered a good beer.

Yes, I am saying that if someone prefers Bud or Miller or Coors (or even Pabst or Old Style), it is ok to respect that choice. Please don't ridicule those poor souls who prefer fizzy yellow beer from time to time.

But, I am also saying that if you only drink Bud or Miller or Coors (or even Pabst or Old Style), don't discriminate from a beer just because you think it looks too dark or you are afraid of too hoppy or have never had a sour beer.

And ... of course, if you are presented with a beer brewed with bull testicles, in my perfect beer world, everyone will try it before they announce how disgusting that is.

Also, to help with this new open attitude, everyplace that serves beer on tap will give you a free taster of a beer if you are not sure about it. Of course it goes without saying that in my perfect beer world, beer drinkers don't abuse this policy.

I could probably go on and on, but you probably don't want to keep reading too much more of my random drivel. With the explosion of craft beer over the past few years, I think the beer-drinking world is improving by leaps and bounds all the time. It is less common for me to talk to a server who can't talk semi- intelligently about the beer they are serving, and I do think there is an increased attitude of acceptance.