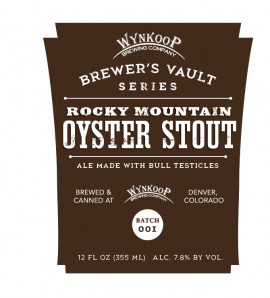 Yesterday, I talked about starting the formulation of my 2012 GABF game-plan. Well, after I posted the article, I saw something else I have to try at GABF.

Eric Gorski, who writes the Denver Post's "First Drafts" posted an article: "No joke: Wynkoop actually brews Rocky Mountain Oyster Stout". Yes, apparently Wynkoop is brewing up a Stout that uses bull testicles as an ingredient. They will be serving it at GABF.

Sure enough, Wynkoop's blog also talks about it.

Wynkoop did an April Fool's joke where they announced that they were planning on brewing this Stout. Now, apparently, the brew-pub decided that this was actually a good idea to brew for real.

I've never tried Rocky Mountain Oysters, but I've heard they are quite good. They are considered a local delicacy. To be honest, I always have it in the back of my mind that they exist for native Coloradans to gross out those of us who invaded their state.

However, I am the sort of person who will try anything once. If I were at dinner with someone who ordered some and was willing to let me taste, I would give a Rocky Mountain Oyster a try. There is a high enough risk, though, that I can't bring myself to order some for myself.

Yes, I am going to find the Wynkoop booth and try this beer. I would not have made an effort to seek out this booth before I saw that they are serving the testicle beer. Wynkoop is local to me, and I can go try their beer any time I want. I am assuming, though, that this particular beer will not be part of their regular rotation and GABF might be my only chance to try Rocky Mountain Oyster Stout.

As I said, I'll try anything once. It can't be worse than those absolutely awful low-carb beers. It won't be as sickening as Bud Light Lime. The GABF one ounce pour is pretty low risk.

Bring it on. It is now part of my game-plan.

Here is the video that Wynkoop shot as part of their April Fool's joke:

Email ThisBlogThis!Share to TwitterShare to FacebookShare to Pinterest
Labels: Brewing, GABF, Video, What is Craft Beer