Last week, I shared on the SheppyBrew Facebook Page the article The Greenhorn’s Survival Guide to GABF. If you are going to GABF, there is some great advice in there. Read it. I think especially the ones that help you from getting to out-of-control drunk are important.
Over indulging is a bad thing. Don't do it.

So, now that the festival is less than 2 weeks away, I need to start making my game plan.

Last year, in my 2011 #GABF Final? Thoughts, I mentioned that I want to attend more of the Brewer Studio Pavilion sessions. So, this has to be part of my game plan.

I also want to attend some of the Beer & Food Pavilion demos.

I told James from Basic Brewing Radio that I would look out for him and say "hi" if I had a chance.

The Breweries at the Festival list has been published for quite some time. As far as breweries that I know I have to visit ....

I think I am going to break one of my GABF rules. I am going to stand in line to get to Russian River Brewing Company in the hopes that I can pick up Pliny the Younger and Blind Pig. That way I can mark them off my list.

Also on my list is Troegs Nugget Nectar. I think this beer is out-of-season and so it probably won't be at GABF, but it won't hurt to give Troegs a visit.

Last year, I made note of the great sour beers I had at DESTIHL out of Normal, IL. I've heard them mentioned on various podcasts since then too. I will be sure to visit these guys again.

I have to try Dragoon Brewing Company out of Tucson, AZ because I know the brewer and want to find out if he remembers me. Eric Green is the guy who gave me tickets to my first GABF back when he was the Brew Master at Mr. Beer.

Crooked Stave Artisan Beer Project had to shut down their tasting room for a couple months because of a licensing misunderstanding. Since I still have not gotten myself to visit them, I will now stop by their GABF booth for sure.

At the moment, I cannot think of any other brewery I HAVE to try to see. I am sure I'll think of more.

I will (as always) be on the lookout for sours. Other that, I will just sort of go with the flow.

Let me know in the comments below if you have a favorite brewery you think I should visit. I am open to suggestions. 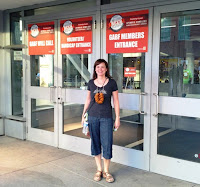